Walnut Street Theatre for Kids Production of A Christmas Carol: A Must See Holiday Tradition 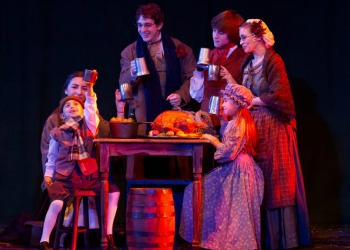 Walnut Street Theatre for Kids’ annual production of Charles Dickens’ A Christmas Carol will bring warmth and cheer to thousands of families and students this holiday season. This hour-long musical adaptation of Dickens’ classic novel begins November 29th and runs through December 21st.

Every year, families take a break from the busy holiday season and come together to watch A Christmas Carol live on stage at Walnut Street Theatre. Filled with laughter, whimsical spirits and original music, this Philadelphia tradition brings joy and magic to children and adults across the region.

Audiences are transported back to 1840’s London, where they meet Ebenezer Scrooge, a bitter old man who can no longer feel joy or affection, even for his family. This grumpy old miser’s response to holiday cheer is “Bah, Humbug.” On one remarkable Christmas Eve, he is visited by the Ghosts of Christmas Past, Present and Future. With their help, Scrooge experiences the magic and merriment of the season, inspiring him to change his miserly ways. He truly learns what the holiday season is all about: family, generosity and love.

WST for Kids’ production of A Christmas Carol welcomes back Director Bill Van Horn. Van Horn is currently performing at the Walnut in Mary Poppins (Admiral Bloom, Bank Chairman) and has appeared in several other Walnut productions, including: Driving Miss Daisy, The Music Man, Curtains, and Fiddler on the Roof. Backstage at the Walnut, he has directed The Dishwashers, Forrest: A Riot of Dreams and Neil Simon’s The Odd Couple. Van Horn also wrote and starred in the acclaimed Independence Studio on 3 production of O Captain, My Captain: Whitman’s Lincoln.

Previously commissioned by the Walnut to adapt Dickens’ holiday tale, Van Horn has become an integral part of this Philadelphia tradition, directing it in 2009, 2010, 2012 and 2013. He collaborated with Michael Borton to write the book and music, and is excited to once again be a part of Walnut’s holiday season. Van Horn noted, “Each year we look forward to seeing the joy on children’s faces as they experience the magic of A Christmas Carol. We enjoy the time we get to spend with the cast and crew, seeing the familiar faces of returning performers, while welcoming new additions to the Walnut family. This year, Mark Collmer will appear on the Mainstage for the first time as the iconic Ebenezer Scrooge!”

Mark Collmer, native to the Philadelphia area, is eager to join the cast as the “humbug”-ing old miser. “I look forward to working with this incredibly 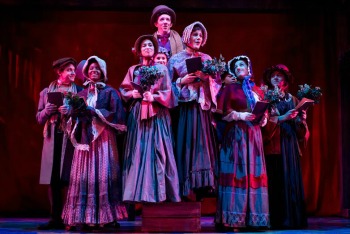 talented and seasoned creative team to bring this wonderful tale to life for the children and families of my hometown.” Collmer, who has also appeared as Scrooge in Maui, is excited to perform this role close to home stating, “When I had the pleasure of performing the role of Scrooge for two years at the Historic Iao Theatre built in 1928 on the island of a Maui, I had no idea I would have the privilege of recreating Ebenezer at a theatre so incredibly rich in heritage and history as the Walnut Street.”

Walnut’s Director of Education, Thomas Quinn, enjoys sharing this musical not only with families, but with teachers and students. “Using live theatre to highlight Dickens’ powerful story creates an educational experience that is exciting and engaging. We provide teachers with study guides that help begin a discussion before school groups attend the production. Dickens’ novel comes to life on stage through cheerful music, period costumes, and familiar characters, creating a lasting impression that continues a conversation outside of the classroom.” A Christmas Carol is a delightful holiday treat for student groups and their teachers.