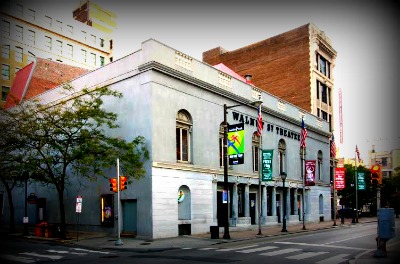 PHILADELPHIA, PA – Walnut Street Theatre, America’s oldest theatre and a National Historic Landmark, is pleased to announce its landmark 208th season of live entertainment and its 34th season as a not-for-profit producing theatre company. The line-up includes three dazzling musicals, a side-splitting comedy, and Oscar Wilde’s most enduring classic hit. As a self-producing regional theatre, the Walnut has become not only the most popular theatre company in Philadelphia, but also the most subscribed theatre company in the world, boasting over 50,000 subscribers!

The Walnut opens its 208th season with a winner of the Tony Award for Best Musical and the Pulitzer Prize, Rodgers and Hammerstein’s SOUTH PACIFIC. The American classic weaves together tales of romance, duty and valor to create a hilarious, heartbreaking, and thought-provoking Broadway musical. Nellie, a spunky nurse from Arkansas, falls in love with Emile, a French plantation owner. At the same time, U.S. Lieutenant Cable falls for a beautiful island native named Liat. On this island of paradise, can true love survive cultural prejudices and the threat of war? The thrilling score includes “I’m Gonna Wash That Man Right Outa My Hair,” “Some Enchanted Evening,” “There Is Nothing Like a Dame,” “Younger Than Springtime” and “I’m in Love with a Wonderful Guy.”  (September 6 – October 23)

Next, “we’re off to see….” THE WIZARD OF OZ with an exciting stage adaptation of the all-time classic! Audience will click their heels together three times and join the Scarecrow, Tin Man, Lion, Dorothy… and Toto too, as they journey through the magical land of Oz to meet the Wizard and obtain their hearts’ desires. This production contains all of the beloved Oscar-winning songs from the movie including “Somewhere Over the Rainbow” and “We’re Off To See The Wizard,” all the favorite characters and iconic moments, plus a few surprises along the way. Rediscover the real story of Oz in this fantastic musical treat for the whole family. The Walnut’s production of Royal Shakespeare Company’s adaptation of THE WIZARD OF OZ promises to be one of the most spectacular holiday productions ever staged by America’s Oldest Theatre! (November 8 – January 8)

Neil Simon, America’s most popular playwright, gives a peek into the writer’s room of a hit 1950s television show in LAUGHTERON THE 23RD FLOOR. People everywhere gather around the TV each week to watch their favorite comedian Max Prince. He’s loud, brash and larger than life. His temper tantrums and one-liners have the power to make careers, or make misery for the writers working around him. The network censors want to change the show to make it more “advertiser friendly,” but messing with Max can only mean the jokes and jabs will get funnier and wilder in an uncertain future, as the world of television heads for change. LAUGHTER ON THE 23RD FLOOR has been called “Simon’s funniest play!” (January 17 – March 5)

Next up, audiences are reminded they can never be too (two) Earnest. The results would be a world filled with chaos, mistaken identity and uncontrollable laughter! When you’re Wilde, you have to take that chance. THE IMPORTANCE OF BEING EARNEST tells the story of two bachelor friends, dandy Algernon Moncrieff and reliable John (Jack) Worthing, as they take on double lives to court the attentions of the desirable Gwendolyn Fairfax and Cecily Cardew. But the gallants must then grapple with the uproarious consequences of their ruse… and with the formidable Lady Bracknell. Oscar Wilde’s much loved and exhilarating masterpiece, with its high comedy and witty dialogue have helped make THE IMPORTANCE OF BEING EARNEST Wilde’s most enduringly popular play. (March 14 – April 30)

Finally, put on some “Boogie Shoes” for SATURDAY NIGHT FEVER, one of the most loved dance stories of all time! The year is 1979 and in Brooklyn, New York, Tony Manero, a young man with a dead-end job and an extraordinary ability to dance, has only one ambition in life - to become the disco king. When he meets Stephanie, who also dreams of a world beyond Brooklyn, they decide to train together for a dance competition, and their lives begin to change forever. Based on the 1977 film that became a cultural phenomenon, the electrifying score is packed with legendary hits from THE BEE GEES including the classics: “Stayin’ Alive,” “Night Fever,” “Jive Talking,” “You Should Be Dancing” and “How Deep is Your Love?” (May 16 – July 16)

The only way to guarantee the best seats is to subscribe. Subscriptions are available now for as little as $95 a season – up to a 77% savings off regular ticket prices!

This season, the Walnut continues its $99 Super Saver Subscriptions.  Thanks to generous sponsors, sixty seats have been set aside in Mezzanine Rows P-R at this reduced rate for all subscription series.

Individual tickets do not go on sale until August 14, 2016. All show titles, dates and subscription prices are subject to change. For information on season subscriptions, call the Walnut at 215-574-3550 ext. 6 (10AM – 10PM) or visit our website at www.WalnutStreetTheatre.org.