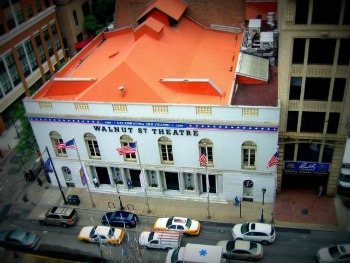 PHILADELPHIA, PA – Walnut Street Theatre, America’s oldest theatre and a National Historic Landmark, is pleased to announce its landmark 207th season of live entertainment and its 33rd season as a not-for-profit producing theatre company. The line-up includes three spectacular musicals, a Pulitzer Prize-winning comedy and a Tony Award-winning adventure. As a self-producing regional theatre, the Walnut has become not only the most popular theatre company in Philadelphia, but also the most subscribed theatre company in the world, boasting over 50,000 subscribers!

President and Producing Artistic Director Bernard Havard is proud to announce the 2015-2016 Mainstage season. Audiences will be treated to Cole Porter’s dazzling musical comedy High Society, Broadway’s hilarious holiday musical A Christmas Story, The Musical and the roof-raising musical comedy smash Sister Act. In addition, they’ll enjoy Broadway’s award-winning Harvey and Peter and the Starcatcher. Havard noted, “I’m thrilled to announce the shows for our upcoming season, which all have stories that are full of heart. We’re looking forward to working with Philadelphia’s sensational artistic talent, both on stage and behind-the-scenes, to create productions that will lead our audiences on exciting journeys, celebrating these incredible works. These are productions that can only be seen in Philadelphia at America’s oldest theatre.”

The Walnut will opens its 207th season with High Society.  Cole Porter’s classic feel-good musical is based on the film musical starring Bing Crosby, Grace Kelly and Frank Sinatra and inspired by The Philadelphia Story. Tracy Lord, a wealthy socialite, is planning her lavish summer wedding when her ex-husband appears to try and win her back. When charming tabloid reporter Mike Connor arrives to cover the nuptials, he too takes a shine to the bride-to-be. As the day of the wedding draws closer who will the bride choose? Audiences are invited to the wedding of the year, and what a swell party it’s going to be! Featuring hit songs including “I Love Paris,” “Let’s Do It,” and the unforgettable “Who Wants to Be a Millionaire?” audiences will fall in love with Broadway’s musical comedy, High Society.(September 8 – October 25)

Just in time for the holiday season, Broadway’s musical comedy A Christmas Story, The Musical will take the stage. In 1940’s Indiana, a bespectacled boy named Ralphie has a big imagination and one wish for Christmas—a Red Ryder BB Gun. A kooky leg lamp, outrageous pink bunny pajamas, a cranky department store Santa and a triple-dog-dare to lick a freezing flagpole are just a few of the obstacles that stand between Ralphie and his Christmas dream. Based on the classic 1983 movie, A Christmas Story, The Musical captures holiday wonder with funny and heartfelt songs, show stopping dancing, delicious wit and a heart of gold. After two triumphant sold-out seasons on Broadway this hilarious musical makes its Philadelphia debut! (November 10 – January 10)

Harvey, the classic Pulitzer Prize-winning Broadway and Hollywood comedy, pulls laughter out of the hat at every turn. Elwood P. Dowd is charming and kind with one character flaw: an unwavering friendship with a 6-foot-tall, invisible white rabbit named Harvey. When Elwood starts to introduce his friend to guests at a society party, his sister Veta can’t take it anymore. In order to save the family’s social reputation, Elwood’s sister takes him to the local sanatorium. But when the doctor mistakenly commits his anxiety-ridden sister, Elwood and Harvey slip out of the hospital unbothered, setting off a hilarious whirlwind of confusion and chaos as everyone in town tries to catch a man and his invisible rabbit. Everyone needs a best friend, and ours is Harvey! (January 19 – March 6)

Next up is Peter and the Starcatcher, a grownup’s prequel to Peter Pan. When starcatcher-in-training Molly meets an orphan boy longing for a home, they embark on the adventure of a lifetime. A breathtaking quest ensues to answer the question: how did a boy named Peter become the boy who never grew up? Peter and the Starcatcher takes a hilarious romp through Neverland. In this Tony Award-winning play with music, a dozen brilliant actors play more than 100 unforgettable characters using their enormous talent, ingenious stagecraft and the limitless possibilities of imagination. This swashbuckling production will have audiences hooked from the moment they let their imagination take flight! (March 15 – May 1)

Finally, the Walnut will have Broadway’s habit-forming musical comedy smash that will make audiences jump for joy, Sister Act! When wannabe disco diva Deloris Van Cartier witnesses a crime, the cops hide her in the last place anyone would think to look—a convent! Under the suspicious watch of Mother Superior, Deloris helps her fellow sisters find their voices as she unexpectedly rediscovers her own. Featuring original music by eight-time Oscar winner Alan Menken (Beauty And The Beast, The Little Mermaid, Newsies), this uplifting musical is filled with toe-tapping songs, outrageous show-stopping dancing and a truly moving story. A sparkling tribute to the universal power of friendship, Sister Act is reason to rejoice! (May 17 – July 17)

The only way to guarantee the best seats is to subscribe. Subscriptions are available now for as little as $95 a season – up to a 77% savings off regular ticket prices!

This season, the Walnut continues its $99 Super Saver Subscriptions.  Thanks to generous sponsors, sixty seats have been set aside in Mezzanine Rows P-R at this reduced rate for all subscription series.

Individual tickets do not go on sale until August 16, 2015. All show titles, dates and subscription prices are subject to change. For information on season subscriptions, call the Walnut at 215-574-3550 ext. 6 (10AM – 10PM) or visit our website at www.WalnutStreetTheatre.org.