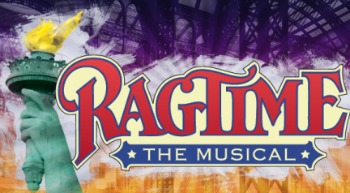 Previews begin Tuesday, March 17 with opening night on Thursday, March 19.  Performances run Tuesday through Sunday until April 12.  Tickets start at $42, with discounts for students, groups and military personnel.  Tickets are available by visiting brtstage.org or calling the BRT Box Office at 215-785-0100.  Bristol Riverside Theatre is located at 120 Radcliffe Street in Bristol, PA.

Ragtime premiered in Toronto in 1996 before moving to a year-long run in Los Angeles.  On Broadway, where it played for two years, it was nominated for thirteen Tony Awards, winning for Best Featured Actress, Best Original Score, Best Book, and Best Orchestrations.  It also received thirteen Drama Desk nominations, winning for Outstanding Musical, Book, Music, Lyrics, and Orchestrations.  It had a brief revival in 2009 which earned it six Tony Award nominations and seven Drama Desk nominations.

Keith Baker (Director) has directed more than 40 productions for BRT including Lost in Yonkers this season, Gypsy starring Tovah Feldshuh, Chicago (nominated for six Barrymore Awards), The Balkan Women (winner of a Barrymore Award for Outstanding New Play), The Dresser (nominated for a Barrymore Award for Best Director of a Play) and Dear World (nominated for three Barrymore Awards).  As an actor he starred in BRT’s 2012-2013 season productions of Deathtrap and Inherit the Wind and also appeared in productions of Barrymore, A Raw Space, Old Wicked Songs, Defiance, Proof, Hamlet, A Little Night Music, Arsenic and Old Lace, and A Moon for the Misbegotten. Baker has been nominated eleven times for the prestigious Carbonell Awards, for which he was twice the recipient for Best Actor.  Prior to coming to BRT, Baker was Artistic Director for the Kentucky Shakespeare Festival and the Florida Repertory Theatre.

Leslie Becker (Mother) returns to BRT where she appeared in Little Women and Baby.  She performed in Bonnie and Clyde and the Broadway revival of Nine and in the national tours of Wicked and Show Boat.  Regionally she has also appeared at La Jolla Playhouse, Barrington Stage Company, Geva Theatre, Signature Theatre and Paper Mill Playhouse.

Derrick Cobey (Coalhouse) has been seen in Philadelphia as part of Philadelphia Theatre Company’s Barrymore Award winning ensemble cast of The Scottsboro Boys, recreating the role he played on Broadway.  He has appeared Off-Broadway in Tin Pan Alley Rag at Roundabout Theatre Company and in several Gilbert and Sullivan operettas at New York City Center.   Featured in Arden Theatre Company’s production of Pacific Overtures, his other regional credits include starring roles in Ragtime at Paper Mill Playhouse and Into the Woods at Great Lakes Theatre Festival.

David Edwards (Father) returns to BRT where he was featured in Laughter on the 23rd Floor and The Foreigner.  He starred on Broadway in By Jeeves and The Rothschilds and in the national tour of The Producers.  Off-Broadway he has appeared at Lincoln Center Institute in The Witch of Wall Street, Soho Playhouse in Room Service, New World Stages in What’s That Smell?, and Sullivan Street Playhouse in The Fantasticks.  In addition to a production of Little Me at American Stage Company which garnered a New Jersey Critics Award for Best Actor, he has performed in three productions of A Little Night Music, nine productions of Man of La Mancha, and multiple productions of both Camelot and 1776.

Tamar Greene (Booker T. Washington) has performed in the national tours of The Gershwin’s Porgy and Bess, and regionally in Rent, The Wiz and Little Shop of Horrors.  With a Masters from Eastman School of Music, he has appeared with Oswego Opera Theatre, Eastman Opera Theatre, and Rochester Lyric Opera.

Michael Thomas Holmes (Tateh) appeared in the national tours of Phantom of the Opera and The Producers, and in New York at Ensemble Studio Theatre, New York Music Festival, and Lucille Lortel Theatre.  Regionally he has performed at Guthrie Theatre, Signature Theatre, Alley Theatre, and Westport Playhouse.  Featured in the film version of The Producers, he has been a television guest star in Smash and Law & Order.

Matt Leisy (Younger Brother) returns to BRT where he appeared this season in The 39 Steps.   Leisy won a Barrymore Award nomination for The History Boys at Arden Theatre Company, a role he also performed at Repertory Theatre of St. Louis.  Appearing Off-Broadway in The Fantasticks, directed by Tom Jones, and in the PBS broadcast production of Carousel at Lincoln Center, he was also seen in The Importance of Being Earnest at Arizona Theatre Company, Ghostlight at Signature Theatre, Pride and Prejudice at Cincinnati Playhouse in the Park, and A Christmas Carol at Alabama Shakespeare Festival.

Ciji Prosser (Sarah) has been a featured soloist in BRT’s Winter Musicale.  She has appeared in Die Zauberflote at Opera Roanoke, and in productions at PRiMA Theatre Company, Longhorne Theatre Company, and The Eagle Theatre.

For more information and tickets visit their website at www.brtstage.org or call their box office at 215-785-0100.