Theatregoers to Converge in New York at Inaugural BROADWAYCON™ Jan. 22-24, 2016 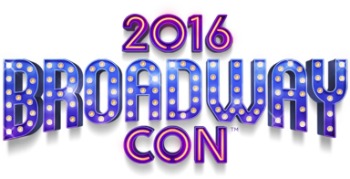 NEW YORK, Feb. 2, 2015 – If you’ve ever dreamt of winning a Tony Award, sung “Defying Gravity” in the shower or seen “Rent” more than 3 times, then hold onto your ticket stubs because BroadwayCon™ is going to bring down the house as the first convention for Broadway fans and theatergoers.

BroadwayCon™ will provide attendees the complete Broadway fan experience all in one incredible weekend that will bring them through the stage door to see and experience what goes on both onstage and behind the scenes. The event will feature three jam-packed days of programming, including panels, performances, workshops, keynotes, autograph and photo opportunities, concerts, meet-and-greets, Q&As and a lot more.

“This is the first convention that brings fans together with the Broadway community,” said veteran Broadway actor Anthony Rapp, a co-creator of the event. “This is about embracing our shared love of theater and celebrating the rich history and exciting future of Broadway.” Rapp, an actor, singer, director and writer is best known for originating the role of Mark in “Rent” and is currently wrapping up his run in “If/Then.” He has played on Broadway for more than 30 years, including turns in “You’re A Good Man Charlie Brown” and “Six Degrees of Separation.”

Attendees of BroadwayCon™ will get a rare opportunity to share memorable interactions with an incredible group of performers, speakers, musicians, dancers, choreographers, designers and more, all of who will bring their experiences, talents, stories and love of theater to the event. Unlike other fan conventions, all autographs and photo opportunities are free to all BroadwayCon™ attendees with the ticket price covering the entire experience.

“This is the first grand-scale convention ever created for Broadway and theater enthusiasts,” said Melissa Anelli, co-executive director of Mischief Management, LLC, which is organizing the convention. “As fans ourselves, we feel it is important that BroadwayCon becomes an annual event that puts fans first. We pride ourselves on offering worthwhile programming, exciting performances and a chance for fans to meet and connect with others who share their passion.”

Throughout the event, The BroadwayCon™ Marketplace will be the place to find one-of-a-kind merchandise, collectibles, souvenirs and apparel to satisfy every fan. Vendors and exhibitors from around the country will be offering one of the largest selections of Broadway-related memorabilia under one roof.

BroadwayCon™ has partnered with Broadway Cares/Equity Fights AIDS (BC/EFA) and will donate a portion of the proceeds from the event to the nonprofit organization.

BC/EFA is one of the nation’s leading industry-based, nonprofit AIDS fundraising and grant-making organizations. By drawing upon the talents, resources and generosity of the American theatre community, since 1988 BC/EFA has raised more than $250 million for essential services for people with AIDS and other critical illnesses across the United States.

Mischief Management, LLC develops and produces events and conventions around the world that are created for specific interest groups. The company founded LeakyCon, recently renamed GeekyCon, that is one of the largest and most recognized annual fandom conventions in the world and attended by thousands of fantasy film and television fans and book enthusiasts.