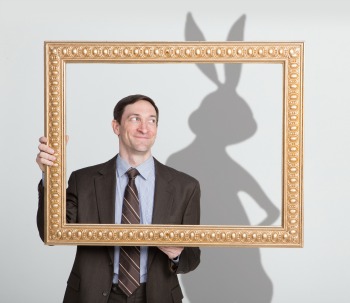 Harvey pulls laughter out of the hat at every turn. Elwood P. Dowd is charming and kind with one character flaw: an unwavering friendship with a 6-foot-tall, invisible white rabbit named Harvey. When Elwood starts to introduce his friend to guests at a society party, his sister Veta can't take it anymore. In order to save the family's social reputation, Elwood's sister takes him to the local sanatorium. But when the doctor mistakenly commits his anxiety-ridden sister, Elwood and Harvey slip out of the hospital unbothered, setting off a hilarious whirlwind of confusion and chaos as everyone in town tries to catch a man and his invisible rabbit. Everyone needs a best friend, and ours is Harvey!

Harvey had its Broadway premiere in 1944 at the 48th Street Theatre. The show was a success and ran for four years. The play premiered in London at the Prince of Whales Theatre in 1949.  The following year, playwright Mary Chase adapted the play for film. The film version starred James Stewart, who later reprised his role on both Broadway and London sages. Most recently, New York’s Roundabout Theatre produced Harvey in 2012, starring Jim Parsons.

Playwright Mary Chase (1906-1981) began her career as a journalist in her hometown of Denver, Colorado. After marrying a fellow reporter, she left her job to raise their children. In doing so, she discovered her passion for playwriting. A few of Chase’s works were produced on Broadway, including Now You’ve Done It, The Next Half Hour, Mrs. McThing, Bernardine and Midgie Purvis. Harvey took her two years to complete and became her biggest success. The play was inspired Chase’s desire to make people affected by WWII smile. More specifically, a friend of Chase’s lost her husband and she wanted to make her laugh again. She was awarded the Pulitzer Prize for Drama for Harvey in 1945, making her the fourth woman to ever receive the award. In her later career, Chase wrote many children’s plays and books.

Ken Ludwig has written 22 plays and musicals, six of which have been on Broadway and seven produced in London’s West End. His work includes Lend Me a Tenor, Crazy for You, Moon Over Buffalo, Baskerville and A Comedy of Tenors. Ludwig has provided additional dialogue for Harvey.

Bob Carlton returns to the Walnut to direct, after his work on last season’s Private Lives by Noël Coward. His prior work on the Walnut’s Mainstage includes Lust (1995), She Stoops to Conquer (1996) and Blood Brothers (1998). Carlton is the former Artistic Director of The Queen’s Theatre, Hornchurch, a position he held for 17 years. He is also a playwright with works including You'll Never Walk Alone (Liverpool Everyman), Keep on Running (Queen’s Theatre, Hornchurch and Birmingham Rep) and From a Jack to a King, which transferred to the West End’s Ambassadors Theatre. His musical Return to the Forbidden Planet won an Olivier Award for Best Musical and was nominated for two Outer Critics’ Circle Awards.

The cast includes Philadelphia’s own Ben Dibble as the lovable Elwood P. Dowd. Dibble’s Walnut credits include 9 To 5: The Musical, Dirty 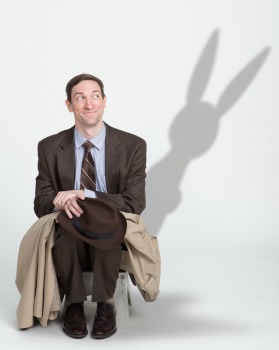 The medical team is made up of actors familiar to the Walnut, including Greg Wood (Shipwrecked: An Entertainment, Private Lives) as William R. Chumley, M.D., Ian Merrill Peakes (An Ideal Husband) as Lyman Sanderson, M.D., and Lauren Sowa (Private Lives) as Ruth Kelly, R.N.. Susan Riley Stevens (The Prescott Method, God of Carnage) joins the cast as Betty Chumley and Ethel Chauvenet and Dan Olmstead returns as Duane Wilson. Olmstead was last seen at the Walnut in High Society and Arsenic and Old Lace. Fran Prisco (A Christmas Story, Memphis) will play the cab driver EJ Lofgren. Judge Omar Gaffney will be played by H. Michael Walls in his Walnut debut.

Harvey runs at the Walnut January 19 through March 6. Open captioning will be available for the 7pm performance on Sunday, February 14. This production is sponsored by AIG and Aqua America. Media Partners are NBC 10 and Metro. For tickets and information, call 215-574-3550 or 800-982-2787. Tickets are also available online 24/7 by visiting http://www.WalnutStreetTheatre.org or Ticketmaster.