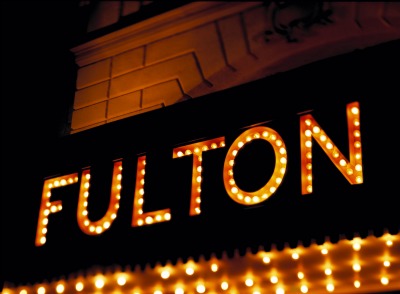 (Lancaster, PA) – The Fulton Theatre is thrilled to announce a season bursting with dance, iconic musical theatre heroes, and a music legend in its mainstage offering! The Ellen Arnold Groff Studio Series, now in its third season, will offer three selections, including a Pulitzer Prize-winning drama. The popular family series again will offer four shows that are ideal for the entire family. The 2016/2017 season kicks off with the mainstage series on Tuesday, September 20, 2016, with the triumphant Billy Elliot.

Billy Elliot: The Musical
September 20 – October 16, 2016
Music by Elton John
Book and Lyrics by Lee Hall
Based on the Universal Pictures/Studio Canal Film
The musical the world fell in love with, Billy Elliot: The Musical received 10 Tony Awards, including “Best Musical” and was named the “Best Musical of the Decade,” by Time Magazine. This triumphant and dance-filled sensation takes place during the mid-1980s coal miners’ strike in North England. Motherless, 11 year-old, Billy trades in his boxing gloves for ballet shoes and discovers a hidden and extraordinary gift. A talent that he keeps from his father and brother as the strike begins to escalate and becomes all-encompassing for his family.  Against all odds and, at first, the disdain of his family, Billy becomes an inspiration not only to his family, but to the entire town. A deeply touching story of heart, humor, and passion told through the musical mastery of Sir Elton John, Billy Elliot: The Musical is “Electric, passionate, and exhilarating.” – David Cote, Time Out New York
Disney’s Beauty and the Beast
November 8 – December 31, 2016
Music by Alan Menken
Lyrics by Howard Ashman, Tim Rice
Book by Linda Woolverton

A timeless family favorite. Experience the enchantment of Disney’s Beauty and the Beast LIVE on the Fulton stage for the first time! This revered fairy-tale promises to be one of the largest of the season, in the grand tradition of the Fulton’s The Wizard of Oz, Les Misérables, and Elf, with expansive sets, beautifully crafted costumes, a large chorus with a robust sound, and more! This “tale as old as time,” reminds us to look beyond one’s exterior and find the beauty from within. Belle finds herself in the middle of a daring and magical adventure, attempting to rescue her beloved father from a terrible beast and offering herself in exchange for his freedom. She soon discovers that she is not the only prisoner held in the beast’s extraordinary castle. All of the fanciful characters, such as a talking tightly wound clock (the butler), adorable tea cup (a young boy), kindhearted candelabra (maître d’), are trapped in this spellbound form until the beast, who is actually a young prince, can learn to love and have his love returned. Disney’s Beauty and the Beast is based on the Academy Award-winning animated feature, with all the cheerful songs we know and love, including “Be Our Guest,” “Gaston,” and of course “Beauty and the Beast.” Whether you’ve seen the film or the stage version of this show, you will discover new heart, hope and personal connection when you experience Disney’s Beauty and the Beast at the Fulton Theatre.

Annie Get Your Gun
January 24 – February 19, 2017
Music and Lyrics by Irving Berlin
Book by Herbert Fields and Dorothy Fields

“There’s No Business Like Show Business,” and that cannot be any more true than with the Fulton’s production of Annie Get Your Gun. This production will mark the celebrated return of Two Ring Circus (having appeared in the 2015 production of The Wizard of Oz). Prepare to be dazzled as the Fulton is transformed into a big top for the travelling Wild West Show and audiences are surrounded by the action. Annie Get Your Gun is based on the real-life story of sharpshooter Annie Oakley, who starred in Buffalo Bill’s Wild West show… including multiple appearances right here at the Fulton! Set to the brilliant score from Irving Berlin, Buffalo Bill’s Wild West show arrives in Cincinnati, Ohio and the show’s womanizing star, Frank Butler, challenges anyone willing to go against him to a shooting match. The Town’s feisty country girl, Annie Oakley accepts his challenge and proves to be the perfect shot. Recruited into the Wild West show, she quickly falls for its star, but will he be able to accept her rising stardom? For over 70 years, this Broadway classic has made audiences rediscover their love of the Broadway Musical.

In The Heights is the first hit creation of Lin-Manuel Miranda, creator of the Broadway phenomenon Hamilton! A universal story of dreaming big, loving large, and finding a place to call home, In The Heights’ heart is located in a small corner of New York’s Washington Heights. In the extreme heat of mid-summer, the close-knit community prepares to celebrate the 4th of July, dreaming of a better place and “getting out.” Usnavi’s bodega, Daniela’s hair salon, and the Rosario family’s taxi service are at the center of bringing the neighborhood together and forming a family, and they are now on the brink of being closed for good, changing their lives forever. An unexpected chain of events, including a blackout, a winning lottery ticket, with romantic tension, leads the group to discoveries about each other, about themselves, and about the place they call home. With a Tony Award for “Best Score,” and “Best Musical,” and a Grammy Award for “Best Cast Album,” In The Heights will find a comfortable home in Lancaster.

Always… Patsy Cline
April 19 – May 21, 2017
Written and Originally Directed by Ted Swindley
Based on a True Story

A music legend and pioneer in Country music, Patsy Cline’s unique stylings remain as relevant and popular today as they were over five decades ago. The original cross-over sensation, topping the Country and Pop Charts, Cline paved the way for artists such as, LeAnn Rimes, Shania Twain, and Carrie Underwood. Always… Patsy Cline is based on a touching true story affectionately told through letters written between Patsy and her biggest fan turned confidant, Louise Segar. A genuine bond of friendship, which began over a cup of coffee, lasted until Cline’s untimely death in 1963. Told through downhome country humor, heartache and celebration, Always… Patsy Cline takes audiences through the ups and downs, from her breakthrough on live radio, to her rise to fame at the Grand Ole Opry. Featuring 27 unforgettable hits, including “Crazy,” “Walkin’ After Midnight,” “I Fall to Pieces,” and “Sweet Dreams,” this musical memory book is a glorious tribute to the one-of-a-kind sound of Patsy Cline!

This chilling mystery thriller by the author of Rosemary's Baby explores the thin line between fantasy and reality, madness and murder. Students Susan and Larry find themselves as guests lured to the crumbling Brabissant mansion by its dissolute caretakers. Struck by Susan's strong resemblance to the owner’s long-deceased daughter Veronica, the older couple slowly persuades her to impersonate Veronica to comfort the confused sister, who believes she is still alive. Once dressed in Veronica's clothes, the line between what’s real and what’s not begins to blur.

A gripping 2013 Pulitzer Prize-winning drama revolves around a dinner party with the most unlikely guests and taboo topics of conversation. Amir Kapoor is a successful Pakistani-American lawyer who is rapidly moving up the corporate ladder while distancing himself from his cultural roots. Emily, his wife, is white; she's an artist, and her work is influenced by Islamic imagery. When the couple hosts a dinner party, what starts out as a friendly conversation escalates into something far more damaging.

The play begins with Michael in a coma after a blood clot unexpectedly formed in his brain three weeks prior. By his hospital bed is his mother, Carol and his dull but well-meaning partner, Paul. They are united in their grief over Michael and in their intense dislike of each other. When Michael wakes, 11 years of his memory has been completely erased. He remembers nothing of the last 4000 days. He remembers nothing of Paul. It is as though the relationship never existed. Paul struggles to bring Michael’s memory back. Carol fights to remove him from Michael’s life. And, the ever charming and witty Michael concentrates on creating a giant mural on the back wall of his hospital room, an expression of his loss, his hopes, and his desire to live his life as the man he was 11 years ago, not the man he has become.

A new and exciting holiday adventure story, based on the Christmas classic, with festive song and dance! A fantastic treat you can enjoy with your entire family and all of your favorite holiday friends – Rudolph the Red Nose Reindeer, Santa, Frosty the Snowman, and more.  Through the magical land of Toyland, Charlotte discovers the true meaning of family and the holidays.

This big, vibrant production is based on the classic Lewis Carroll fantasy novel, which follows Alice on a fanciful adventure as she tumbles down the rabbit hole to discover a host of extraordinary characters and magical new worlds. All the unforgettable characters are there – the Cheshire Cat, the March Hare, Tweedledee and Tweedledum, the Jabberwocky – but this time, grooving to a fun pop score. At the play’s end, Alice’s trial becomes a country-western hoedown where she learns very important life lessons.

When James is sent by his conniving aunts to chop down their old fruit tree, he discovers a magic potion which results in a tremendous peach - and launches a journey of enormous proportions. Suddenly, James finds himself in the center of the gigantic peach among human-sized insects with equally oversized personalities, but after falling from the tree and rolling into the ocean, the group faces hunger, sharks and plenty of disagreements. Thanks to James' quick wit and creative thinking, the residents learn to live and work together as a family. The dangerous voyage is a success, but the adventure takes a whole new twist once they land on the Empire State Building.

A carnival wish granted, young Josh Baskin’s dream to become “big” comes true at the hands of the Zoltar machine, and he is immediately thrusted into adulthood. Josh discovers being an adult is not all fun and games when he is forced to find a job and a girlfriend. In the end he learns we must all grow up at our own pace, in our own time.

Subscriptions to the Mainstage, Ellen Arnold Groff Studio Series, and Eichmann Family Series are on  sale now. Single tickets will go on sale on Tuesday, September 6, 2016. The Fulton performs in the historic landmark theatre located at 12 North Prince Street in Lancaster, PA. For more information or to purchase tickets call 717.397.7425 or visit TheFulton.org.

Today, under the leadership of Artistic Director Marc Robin and Managing Director Aaron A. Young, the Fulton Theatre produces a mix of comedies, dramas and musicals, employing the talents of professional directors, designers, playwrights and actors from the local community, New York and across the country. The Fulton also offers acting classes for children, teens and adults as well as numerous outreach programs for youth across the region.