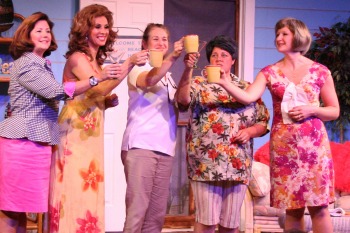 Get the girls back together! The Dixie Swim Club is making a splash at the Dutch Apple Dinner Theatre from February 19th through March 21st, 2015. It’s a touching comedy to enjoy with all of the friends!

The Dixie Swim Club is about five Southern women who were on the same college swim team. They set aside one weekend every August, free from husbands, kids and jobs, to laugh, catch up and rekindle their friendship at a beach cottage in North Carolina. As the years pass, the women grow to rely on each other through each and every one of life’s surprises.

Kelly Legarreta and Alison Rose Munn, playing Vernadette and Jeri Neal respectively, performed these roles to sold-out crowds at the Dutch Apple’s sister theatre in Fort Myers, Florida in March/May of 2014. This will actually be Legarreta’s third time performing what she describes as “truly one of her favorite roles of all time”. Munn delighted crowds in early 2014 with her performance as Sue Ellen in Honky Tonk Angels. Other Dutch Apple alums include Lisa Coday, playing Dinah, and Jennifer Hope, playing Sheree. Coday and Hope were both recently seen in A Wonderful Life and Mid-Life 2 (The Crisis Continues). The role of Lexie will be performed by Kira Galindo who is from Phoenix, Arizona.

The Dixie Swim Club will be at the Dutch Apple Dinner Theatre February 19th through March 21st, 2015. Ticket prices range from $49 to $56 for meal and show with a special group discount for groups of 16 or more. A limited number of show-only seats are available for $34. Call 717-898-1900 to make a reservation or order your tickets online at DutchApple.com.