Media, PA– The joint will be jumpin’ on Thursday, July 23 as the Media Theatre turns back the clock to the heydays of big band sounds, tuxedo clad singers and lively banter. Philly favorites Jeff Coon And The Summer Club host a lineup of two hours of cool with a cause – belting out familiar tunes while raising much-needed funds for Philly’s own ALS Hope Foundation.

Tickets are now on sale for A Swingin’ Concert For Hope starring the fabulous foursome of Jeff Coon, JP Dunphy, Michael Philip O’Brien and Fran Prisco. Concert-goers will hear “That’s Life,” “Feelin’ Good,” “I’m Gonna Live Til I Die” and “A Wink And A Smile” among the 20-song set. Special guests include Krissy Fraelich and Mark Stuart. 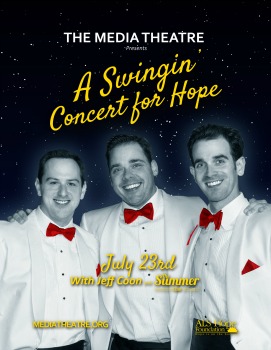 The snappy Swingin’ Concert For Hope will begin at 7:30 pm at 104 E. State Street in downtown Media. Tickets are tiered at $150 for Premium, $100 for Orchestra and $80 for Standard seating.

Two Sky Boxes will be made available in the beautiful balcony section of the 1927-era Media Theatre. A $10,000 corporate sponsorship will allow 20 guests to be seated in VIP luxury with a personal bartender. For sponsorships or to make a donation, contact Jacquellyne at ALS Hope Foundation at 215-568-2426.

Premium ticket holders will be treated to a 6:30 pm pre-show reception catered by Robert Ryan that will also feature a silent auction. ALS Hope Foundation’s Ambassador (and Philadelphia Flyers legend) Bernie Parent will stop by the reception being held in the theatre’s Crystal Room.

All ticket holders for the benefit concert will be invited to join the post-show dessert reception.

Philadelphia’s own ALS Hope Foundation supports education, care and research for individuals living with Amyotrophic Lateral Sclerosis, often referred to as “Lou Gehrig’s Disease.” Sadly, it is the most common degenerative disease of the adult motor system.

Tickets to A Swingin’ Concert For Hope can be purchased through the Media Theatre’s website, www.MediaTheatre.org. or may be reserved by calling the box office at 610-891-0100.

Founded in 1999 by Terry Heiman-Patterson, MD and Jeffrey Deitch, PhD, the ALS Hope Foundation provides funding for the MDA/ALS Center of Hope, the first multidisciplinary ALS clinic in the country, and the Neuromuscular Research Laboratory at Drexel University College of Medicine. The ALS Hope Foundation funds local and international efforts to find the cause and cure of ALS. The much needed support is generated through fundraisers and private donations. Currently in their 15th year of serving the ALS community, the Foundation is committed to continuing their work until there is a cure.

Multi-talented Coon graduated from Penn in 1993 with a Theatre Arts degree and has been a professional actor and singer ever since. Called by Philadelphia Weekly “one of Philadelphia’s most talented and vocally gifted musical performers,” Coon has appeared in over 100 professional productions, and been nominated for 10 Barrymore Awards (Philadelphia’s theatre awards), winning once. He appears frequently at Walnut Street Theatre and Arden Theatre Company in Philadelphia, and has performed nationally with Philadelphia Theatre Company, The Kennedy Center, The Prince Music Theatre, Houston’s Theatre Under the Stars and Seattle’s 5th Avenue Theatre, among others.

About The Media Theatre

The Media Theatre, located on beautiful State Street in downtown Media, was originally constructed in 1927 as a vaudeville house also featuring talkies. The ornate physical structure of the Theatre represents the historic presence and unique value of downtown Media. Their 2015-2016 Broadway Series kicks off September 23 with Gypsy followed by Billy Elliott: The Musical, To Kill A Mockingbird, Dogfight and finally 1776 – in time for the 2016 Democratic Convention in Philadelphia. For tickets for Swingin’ Concert For Hope or any upcoming shows, click on www.MediaTheatre.org.