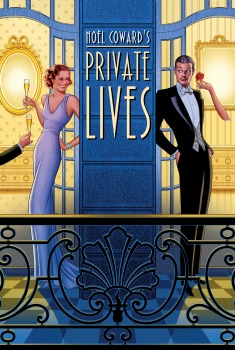 Bernard Havard, Walnut’s Producing Artistic Director, noted, “I believe this is Noël Coward’s greatest comedy. We’re thrilled to produce this play, which is celebrating the 85th anniversary of its world premiere. With the cast we’ve assembled, along with our director, and my friend, Bob Carlton, this is the perfect time to reignite our romance with Private Lives.”

Glamorous, rich and reckless, Elyot and Amanda have been divorced from each other for five years. Now both are honeymooning with their new spouses at a French seaside resort. When by chance they meet again across adjoining hotel balconies, their romantic feelings for each other are immediately rekindled. Without a care for scandal, new partners or memories of what drove them apart in the first place, they hurl themselves headlong into love and lust. Noël Coward’s Private Lives is a dazzling, witty masterpiece and considered to be one of the greatest comedies ever written.

The play premiered in 1930 at the King’s Theatre in Edinburgh starring Coward alongside his lifelong friend, Gertrude Lawrence. Later that same year, the play opened at the Phoenix Theatre in London, playing to sold-out houses for a limited run. Private Lives saw its Broadway premiere in January 1931, the same year it was adapted for film. Several adaptations followed for television and radio.

Private Lives has had seven revivals on Broadway, most recently in 2011. The 2002 revival received numerous awards, including the Tony for Best Revival of a Play and the Drama Desk Award for Outstanding Revival of a Play. Casts have included actors such as Tallulah Bankhead, Elizabeth Taylor, Dame Maggie Smith, Kim Cattrall, Richard Burton, Alan Rickman and Sir Robert Stephens.

Born in 1899 in a suburb of London, Noël Coward was an English playwright, composer, director, actor and singer. During his career, which bridged over six decades, he published more than 50 plays, many of which remain in present day theatre repertoire. His works include Hay Fever, Blithe Spirit, Design for Living and Present Laughter. In addition to his work as a playwright, Coward composed hundreds of songs, musical theatre works, poetry, short stories, a novel, and a three-volume autobiography. His many awards include an Honorary Academy Award in 1943 for his film In Which We Serve and a Special Tony Award in 1970 for his multiple and immortal contributions to the theatre. Coward was knighted in 1969 and the Noël Coward Theatre, formerly the Albery Theatre, was named in his honor in 2006.

Bob Carlton returns to the Walnut to direct. His prior work on the Walnut’s Mainstage includes Lust (1995), She Stoops to Conquer (1996) and Blood Brothers (1998). Carlton is the former Artistic Director of The Queen’s Theatre, Hornchurch, a position he held for 17 years. He is proud to have founded The Queen’s resident company, the award-winning cut to the chase… , which is the only professional resident company of actors in the UK. Carlton’s additional directing credits include Oxford Playhouse, Newcastle Playhouse, Liverpool’s Everyman and London’s Haymarket Theatre. He is also a playwright with works including You'll Never Walk Alone (Liverpool Everyman), Keep on Running (Queen’s Theatre, Hornchurch and Birmingham Rep) and From a Jack to a King, which transferred to the West End’s Ambassadors Theatre. His musical Return to the Forbidden Planet won an Olivier Award for Best Musical and was nominated for two Outer Critics’ Circle Awards.

The cast includes Philadelphia’s own Greg Wood playing the witty Englishman, Elyot Chase, following his performance in Walnut’s production of Other Desert Cities last season. His wife, the young and attractive Sibyl, will be played by Lauren Sowa, making her Walnut debut. Kathleen Wallace also makes her Walnut debut in the role of the independent, unconventional Amanda Prynne. Dan Hodge joins the cast as the handsome Victor Prynne. Hodge was last seen on the Walnut’s stage in The Mousetrap. Louise, Amanda’s French-speaking maid, will be played by Clare O’Malley in her Walnut debut.

With elegance and sophistication, Coward’s masterpiece will sparkle on a beautiful set designed by Robert Koharchik, making his Walnut debut with this production. His work has been seen on the stages of Indiana Repertory Theatre, Phoenix Theatre, The Cleveland Playhouse and Geva Theatre. Joining Koharchik are costume designer Mark Mariani (Noël and Gertie, After Play), sound designer Elizabeth Atkinson (Beautiful Boy, Sophie Tucker: The Last of the Red Hot Mamas) and Walnut newcomer, lighting designer Stuart Duke.

Private Lives runs at the Walnut January 13 through March 1. This production is sponsored by M&T Bank and Wilmington Trust. Media Sponsor is NBC 10. For tickets and information, call 215-574-3550 or 800-982-2787. Tickets are also available online 24/7 by visiting www.WalnutStreetTheatre.org or Ticketmaster.