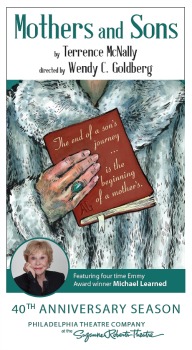 Previews begin Friday, February 6 with Opening Night on Wednesday, February 11.  Performances run Tuesdays through Sundays until March 6.  Tickets starting at $25 are available by calling the PTC Box Office at 215-985-0420 or visiting www.PhiladelphiaTheatreCompany.org.

In Mothers and Sons, a woman pays an unexpected visit to the apartment of her late son’s partner, Cal, who is now married to another man and has a young son. Still coping with loss and unexplainable anger, Katherine is challenged by Cal to confront the truths of their shared past, and a future she never imagined.  This eloquent and moving play explores the very essence of family and forgiveness in a changing society.

“We are honored to include Terrence’s timely and compassionate play as part of our 40th Anniversary celebration.  Within an extraordinary body of work, Mothers and Sons is, to me, one of his finest plays, managing to be simultaneously intimate and epic.  He is a master playwright, writing at the height of his power,” said Executive Producing Director Sara Garonzik.

PTC’s relationship with Terrence McNally goes back 25 years, including the world premiere productions of the Tony Award-winning Master Class, Some Men, Unusual Acts of Devotion, and Golden Age, the latter of which was presented at the Kennedy Center as part of Terrence McNally’s Night at the Opera, which also included Master Class and The Lisbon Traviata.  In 2012, PTC established the Terrence McNally New Play Award which is given annually to a play that celebrates the transformative power of art.  Mothers and Sons premiered at Bucks County Playhouse before moving to Broadway last season where it was nominated for Tony and Drama League Awards.

Terrence McNally (Playwright) is a recipient of the Dramatists Guild Lifetime Achievement Award. He has won four Tony Awards for his plays Love! Valour! Compassion! and Master Class and his musical books for Kiss of the Spider Woman and Ragtime as well as two Guggenheim Fellowships, a Rockefeller Grant, the Lucille Lortel Award, the Hull-Warriner Award, and a citation from the American Academy of Arts and Letters.  He won an Emmy Award for his television film Andre’s Mother.  The Kennedy Center recently produced three of his plays under the title Terrence McNally’s Nights at the Opera: Master Class, The Lisbon Traviata, and Golden Age. His play And Away We Go premiered at the Pearl Theatre Company in last November.  A revival of It’s Only A Play with a starry cast including Nathan Lane and Matthew Broderick is currently running on Broadway as is Lips Together, Teeth Apart at Second Stage.

Wendy C. Goldberg (Director) has been Artistic Director of the Eugene O’Neill National Playwrights Conference for ten seasons.  Under her tenure, the O’Neill was awarded the 2010 Regional Tony Award, the first play development and education organization to receive this honor.  In addition, Goldberg has overseen the development of more than 70 projects for the stage, many of which have gone on to great acclaim with productions in New York and around the country.  Goldberg had previously served as Artistic Associate at Arena Stage for five seasons, where she created the theater’s new play initiatives and led them from their inception through 2005.  She is also an award-winning director whose credits include multiple productions at Arena Stage, the Guthrie Theater, Goodman Theatre, Denver Center Theatre Company, Alliance Theatre, Cincinnati Playhouse in the Park, Actors Theater of Louisville, Signature Theater, Paper Mill Playhouse, and Off-Broadway at Ars Nova, The Daryl Roth 2 Theatre, and McGinn Cazale Theatre.  She is represented on Broadway as Creative Advisor to the long-running Rock of Ages.

Patrick Gibbons (Bud) alternates with Jacob D. Wilner in this role.  Nine year-old  Gibbons from Malvern has had recurring roles on One Life to Live and has appeared in A Little More Alive at Kansas City Repertory Theatre.  Wilner, a nine year-old resident of Plymouth Meeting, comes to PTC having just appeared at the Walnut Street Theatre as Michael Banks in Mary Poppins.  He has also performed at Carousel Productions and Summer Stage.

Hugh Kennedy (Will) has appeared in numerous productions at Guthrie Theatre including Tribes directed by Wendy Goldberg, and Pride and Prejudice, Arsenic and Old Lace, Two Gentlemen of Verona, The Government Inspector, and A Midsummer Night’s Dream, all directed by Joe Dowling.  His New York credits include appearances at The Acting Company and New York Theatre Workshop.  He received Pittsburgh’s 2012 Ivey Award for Best Actor of the Year in Buzzer and was a 2004 Presidential Scholar of the Arts.

Michael Learned (Katharine) is best known for her role as Olivia Walton in the long-running CBS drama series, The Waltons, for which she was nominated for six Primetime Emmy Awards for Outstanding Lead Actress in a Drama Series, winning three times.  She also received two more Emmy nominations for her starring role in Nurse, winning one additional Award.  She is also a Peoples’ Choice Award winner and four-time Golden Globe nominee.  Learned has appeared on Broadway in The Best Man and The Sisters Rosenzweig.  Other theater appearances include Driving Miss Daisy at both the New Theatre and The Rubicon, One Slight Hitch at the Falcon Theatre, Elizabeth the Queen at the Folger Shakespeare Library, and All Over at both The Gramercy Theatre and McCarter Theatre.  West Coast premieres include Woman in Mind and Hapgood, both for American Conservatory Theatre, where she has been involved as a leading lady since 1967, Mary Stuart and Picnic at the Ahmanson, A Month in the Country at Mark Taper Forum, and Looking for Normal at the Geffen Playhouse.   Recently she appeared in Delaware Theatre Company’s productions of The Outgoing Tide, which then moved Off-Broadway, and Love Letters.

James Lloyd Reynolds (Cal) has been seen Off-Broadway at Playwrights Horizons, PS 122, and the Columbia New Play Festival at both Signature Center and New York Theatre Workshop.  Regionally he has appeared in several productions at Berkshire Theatre Festival and Goodspeed Opera House as well as at the O’Neill Festival, Syracuse Stage, Florida Stage, and Pittsburgh City Theatre.  He is the recipient of the Oliver Thorndike Award in Acting at the Yale School of Drama where he earned his MFA.

Mothers and Sons brings together the creative team of PTC veterans set designer John Arnone, costume designer Richard St. Clair and sound designer Daniel Perelstein, and introduces lighting designer Josh Epstein.  With a long and award-winning history in American theater, John Arnone is the recipient of Tony Award, Drama Critics Award, and Outer Critics Circle Award for The Who’s Tommy as well as two OBIE Awards, including one for sustained achievement in the theater.   For PTC he designed the world premiere of Red Hot Patriot: The Kick-Ass Wit of Molly Ivins.  Josh Epstein has served multiple seasons as Resident Lighting Designer for the O’Neill Playwrights Conference and worked regionally at the Guthrie Theatre, Mark Taper Forum, Long Wharf Theatre, and Actor’s Theatre of Louisville.  The winner of two Barrymore Awards, Richard St. Clair designed costumes for PTC’s Outside Mullingar; Vanya and Sonia and  Masha and  Spike; and Venus in Fur and for its world premiere production of Golden Age.  Daniel Perelstein, who earlier this season designed the sound for Detroit, won a Barrymore Award for Outstanding Sound Design for Knives in Hens and is an F. Otto Haas Semi-Finalist Award.