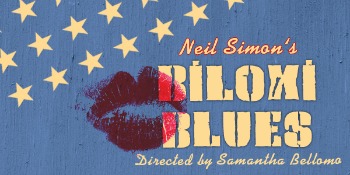 Neil Simon is one of America’s most prolific and successful playwrights. For over five decades, his ability to create humor from the lives and struggles of everyday people has resonated with audiences across the United States.  It is the 30th Anniversary of the Broadway debut of Biloxi Blues, the second installment of Simon’s acclaimed semi-autobiographical Eugene Trilogy, which also includes Brighton Beach Memoirs (’83) and Broadway Bound (’86). Inspired by Simon’s own experiences in boot camp during World War II, Biloxi Blues is a funny and touching coming of age story set in 1943. While stationed in Biloxi, Mississippi to complete basic training, the Jewish Brooklyn-born Eugene Jerome confronts anti-Semitism and his first sexual experience. Along with his fellow recruits, Eugene suffers under a hard-nosed hard-drinking platoon leader Sergeant Merwin J. Toomey, and wonders if he’ll live long enough to achieve his dreams.

Portraying Eugene is People’s Light newcomer, James Michael Lambert. A graduate from UCLA, Lambert has been seen on television’s Mad Men, as well as on stages across the country appearing in the tour of Mamma Mia, at South Coast Repertory Theatre in A Wrinkle In Time, and as Ralph Malph in the musical adaptation of Happy Days, which led him to work with director Garry Marshall. Also making their People’s Light debuts are Jordan Geiger (Arnold Epstein), Luke Brahdt (James Hennessy), and Ben Harter- Murphy (Don Carney).

People’s Light Associate Artistic Director Pete Pryor will portray Sgt. Toomey. He is reunited with Julianna Zinkel (Rowena) and Clare Mahoney (Daisy) who all appeared in Pride & Prejudice directed by Samantha Bellomo at People’s Light in 2014. As with Bellomo’s widely praised production of the Austen classic, the inclusion of movement is a core element to her interpretation of Biloxi Blues. Bellomo says “Our production will explore the juxtaposition of the percussive boot camp cadences with the lyrical popular songs of 1943. The many scene changes that happen in the course of the play will also be choreographed as drills. It will be exciting to create the physicality of the WWII army.  I can’t wait to tackle the physical and mental challenges of Biloxi Blues!”

It is the first production of a Neil Simon play in the company’s forty year history. Samantha Bellomo and Pete Pryor, however, have each previously worked on Simon productions with different companies including 1812, which Pryor co-founded. “Pete and Samantha have a rich history with Simon’s work outside of People’s Light. We’re thrilled to bring their infectious enthusiasm for Simon’s humor and heart onto our stages” says Producing Director Zak Berkman. “It is also important to us that our 40th Anniversary Season features iconic plays with dynamic ensembles. From Wilson’s Fences to Chekhov’s The Cherry Orchard to Simon’s Biloxi Blues, the energy, empathy, and risk-taking of a group of skilled and accomplished actors are front and center.”

ENHANCE YOUR EXPERIENCE AT PEOPLE’S LIGHT

Join us for Canteen Nights after Thursday evening performances (May 7, 14, and 21). These Talkbacks, led by Director Samantha Bellomo, include the entire Biloxi Blues cast and will be held in the upper lobby of the theatre where non-alcoholic concessions will remain open.

After the 7:30 performance on Wednesday, May 6, veterans and family members from Warrior Writers will share original works in a brief, post-show performance. There is no additional charge, admission is free for Biloxi Blues ticket holders.

People’s Light continues its Scoop program on Wednesdays. Scoop on Wednesdays: History, Context, and Gossip is a lively discussion before every Wednesday 7:30 pm performance (May 6, 13, and 20). Dramaturg Mary Elizabeth Scallen will host Pete Pryor (who portrays Sgt. Toomey) and get the inside scoop about such things as the rehearsal and production process, design choices, and the world of the play.  The program begins at 6:00 in The Farmhouse Bistro.  Cost of $15 includes light fare. Call the Box Office at 610.644.3500.

Enjoy a prix fixe dinner and a show package for $73 (Wed, Thurs, Sat matinee, Sun eve) and $82 (Fri, Sat eve, Sun matinee) at The Farmhouse Bistro prior to Wed-Sun evening performances. That’s a savings of up to 15% off the single ticket price! If you already have tickets, you can add dinner for just $37. Dinner and a show packages are available through the Box Office or online at PeoplesLight.org.

Treat mom to a delightful Mother’s Day brunch on Sunday, May 10 at The Farmhouse Bistro.  Our Award-winning gardens and 18th century Farmhouse offer a charming, historic setting for this special occasion. A Mother’s Day package includes a buffet brunch and 1 ticket for Biloxi Blues. Pricing for children 12 and under is $44, $66 for teens and $83 for adults. Reserve your table and tickets online at PeoplesLight.org or call the box office at 610.644.3500.

People’s Light is a participant of the Blue Star Theatres Initiative, a collaboration between Theatre Communications Group and Blue Star Families, with leadership support from the MetLife Foundation. We offer 25% off tickets to military personnel and their immediate families. Call the Box Office at 610.644.3500 or purchase online and use the promo code USA14.

Single tickets start at $27. For tickets, call the Box Office at 610.644.3500.  Special discounts are available for groups of 10 or more, including a 30% discount for military affiliated groups.  For more information or to purchase group tickets, call 610.647.1900 x111 or email benedict@peopleslight.org.

Now in its 40th season, People’s Light, a professional, not-for-profit theatre in Chester County, Pennsylvania, makes plays drawn from many sources to entertain, inspire, and engage our community.  We extend our mission of making and experiencing theatre through arts education programs that excite curiosity about, and deepen understanding of, the world around us. These plays and programs bring people together and provide opportunities for reflection, discovery, and celebration.  Founded in 1974, we produce seven to nine plays each season, in two black box theatres with 340 and 160 seats respectively, mixing world premieres, contemporary plays, and fresh approaches to classic texts for our 7-Play, Discovery, and Teen Series.