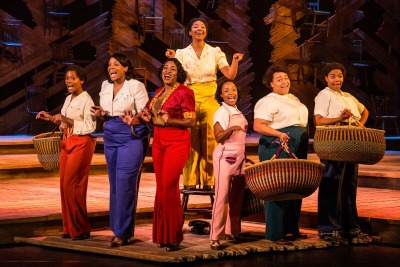 The Color Purple, the Tony Award-winning revival that thrilled Broadway audiences is coming to Paper Mill, where director John Doyle will remount his visionary production. This unforgettable and moving musical based on the Pulitzer Prize-winning novel and Academy Award-nominated film features a soul-raising, Grammy-winning score infused with jazz, gospel, ragtime, and blues. The Color Purple, with a book by Marsha Norman and music and lyrics by Brenda Russell, Allee Willis, and Stephen Bray, is a stirring family chronicle about the power of love and life. This show contains adult themes.

“I'm absolutely delighted to have the opportunity to remount The Color Purple at the renowned Paper Mill Playhouse,” said director John Doyle.  “It's travelled a long journey from London's tiny Menier Chocolate Factory, to its Tony-winning Broadway run, to a successful U.S. national tour. These weeks at the wonderful Paper Mill Playhouse will be the perfect coda to the journey. Now, more than ever, we need to be reminded of Alice Walker's inspirational story."

The Color Purple will be performed at Paper Mill Playhouse eight times a week, Wednesday through Sunday. Performance schedule: Wednesday at 7:30pm, Thursday at 1:30pm and 7:30pm, Friday at 8:00pm, Saturday at 1:30pm and 8:00pm and Sunday at 1:30pm and 7:00pm. Tickets are on sale now starting at $34. Tickets may be purchased by calling 973.376.4343, at the Paper Mill Playhouse Box Office at 22 Brookside Drive in Millburn, or online at www.PaperMill.org. Visa, MasterCard, Discover, and American Express accepted. Groups of 10 or more may receive up to a 40% discount on tickets and should call 973.315.1680. Season subscriptions are on sale now and are available by calling 973.379.3717.  Students may order $23-$28 rush tickets over the phone or in person at the Paper Mill Playhouse Box Office on the day of the performance.

ANN HOULD-WARD (Costume Design). Select Broadway: The Color Purple, The Visit, The People in the Picture, A Free Man of Color (Drama Desk nomination), A Catered Affair (Drama Desk nomination), Beauty and the Beast (Tony Award), Into the Woods (Tony and Drama Desk nominations), Falsettos, Sunday in the Park with George (Tony and Drama Desk nominations), Saint Joan, Little Me. Off Broadway: Pacific Overtures, Dead Poets Society, Passion (Classic Stage Company); Notes from the Field (Second Stage); Russian Transport; The Blue Flower; Road Show; Lobster Alice; Cymbeline. Ms. Hould-Ward’s work can be seen in over 35 international companies of Beauty and the Beast and in shows all over the world. More than 100 regional credits, including Can-Can at Paper Mill. Inaugural recipient of FIT’s Patricia Zipprodt Award.

JANE COX (Lighting Design). Previous collaborations with John Doyle include Pacific Overtures, Peer Gynt, Allegro, and Passion at Classic Stage Company; The Color Purple on Broadway and in London; Road Show; and Lucia di Lammermoor. Recent theater credits include Jitney, Noises Off, and Amélie on Broadway; Othello at NYTW; and Hamlet in London; and previous Broadway credits also include Machinal, All the Way, Picnic, and others. Jane has been nominated for two Tony Awards and three Drama Desk Awards, and she is a member of the Monica Bill Barnes Company and is the director of the theater program at Princeton University.

MELISSA CHACÓN (Production Stage Manager). National Tours: The Color Purple, The Bodyguard, The Bridges of Madison County, We Will Rock You, Billy Elliot, Contact, Rent. Off Broadway: Avenue Q. Regional credits include The Iceman Cometh at BAM with Nathan Lane and Brian Dennehy, The Bodyguard at Paper Mill Playhouse, and Les Misérables. She earned her MFA in Stage Management from Rutgers University’s Mason Gross School of the Arts.

Accessibility Performances for The Color Purple

Paper Mill Playhouse, a leader in accessibility, will offer audio-described performances for The Color Purple on Saturday, October 20, 2018, at 1:30pm and Sunday, October 21, 2018, at 1:30pm. Prior to these performances at noon, the theater will offer free sensory seminars. Sensory seminars offer an opportunity for patrons with vision loss to hear a live, in-depth description of the production elements of the show and hands-on interaction with key sets, props, and costumes.  There will be a sign-interpreted and open-captioned performance on Sunday, October 21, 2018, at 7:00pm.

Conversation Club: Join us Thursday evenings, September 27, October 4, October 11 and October 18 one hour before curtain for an informal, informative gathering. You'll learn more about the performance you're about to see.

The Director's Viewpoint: One hour before curtain at 6:30pm on Wednesday, September 26, we host a pre-show discussion in the Renee Foosaner Art Gallery.

Q&A with the Cast: After the matinee on Saturday, October 20, stick around for a lively Q&A with cast members directly following the performance.

Paper Mill Playhouse’s 80th anniversary season also includes Irving Berlin’s Holiday Inn (November 21-December 30), based on the beloved Bing Crosby/Fred Astaire film. This heartwarming, toe-tapping production features more than 20 classic songs from the Berlin catalog, including “Easter Parade,” “Cheek to Cheek,” “Steppin’ Out with My Baby,” and “White Christmas.” In the winter, Paper Mill Playhouse presents the world-premiere musical My Very Own British Invasion (January 31-March 3), directed and choreographed by Tony Award winner Jerry Mitchell. The 1960s British music scene comes to life with songs from Herman’s Hermits, The Beatles, The Rolling Stones, Petula Clark, The Moody Blues, and other legendary bands of the era. The spring brings the East Coast premiere of Benny & Joon (April 4-May 5). Based on the 1993 film which starred Johnny Depp and Mary Stuart Masterson, this new musical is a smart, funny, tender-hearted celebration of love: between children and parents; romantic partners; friends; and, most of all, siblings. The final production of the season, Disney’s Beauty and the Beast (May 29-June 30), an international sensation that has played to more than 35 million people in 13 countries. Based on the Academy Award-winning animated feature, the stage production includes all of the original songs from the movie by Alan Menken and Howard Ashman, plus additional gems by Menken and Tim Rice.

“Paper Mill Playhouse is thrilled to produce a season of all musicals in our exciting 2018-2019 lineup including a world premiere and an East Coast premiere,” commented Mark S. Hoebee, Producing Artistic Director of the Millburn theater. “Producing new works is central to our vision of becoming recognized as one of the most important incubators of new musical projects. We're opening our doors to collaborate with and host the top talents of musical theater, whether they be established artists like Jerry Mitchell, or up-and-coming playwrights and composers. Of course, none of what we do would be possible without the generous support of our subscribers, donors, patrons, foundations and corporate partners, including the many years of season sponsorship from our friends at Investors Bank."

PAPER MILL PLAYHOUSE, a not-for-profit arts organization under the direction of Mark S. Hoebee (Producing Artistic Director) and recipient of the Regional Theatre Tony Award in 2016, is one of the country's leading regional theaters.  Paper Mill Playhouse programs are made possible, in part, by funds from the New Jersey State Council on the Arts, a partner agency of the National Endowment for the Arts. Paper Mill Playhouse is a member of the National Alliance for Musical Theatre, the Council of Stock Theatres, and the New Jersey Theatre Alliance.