ONCE, THE MUSICAL Begins Performances at Fulton Theatre March 19, 2019 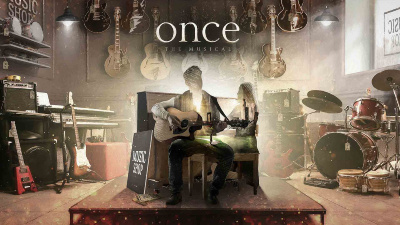 (Lancaster, PA) – The nationally regarded Fulton Theatre, in association with Virginia Repertory Theatre, is proud to present the inspiring and romantic Once, The Musical, March 21 through April 14, with Previews March 19 and 20. The actors serve as their own orchestra, playing sixteen instruments, a mixture of Celtic and traditional, for a melodic and foot-stomping good time!

Two thirty-somethings with music in their souls meet by chance on the streets of Dublin. He is ready to walk away from the melody that has left him heartbroken, until she gets a hold of his music and his heart. She attempts, with great effort, to keep things professional as they write new music together, so he has the chance to pursue both his musical dreams and his ex-girlfriend, in New York City. This touching musical captivates audiences from the first note and will sweep you away with its timeless romantic score, including the Academy Award®-winning song “Falling Slowly.”

Once, The Musical, book by Enda Walsh, with music and lyrics by Glen Hansard and Markéta Irglová, is based on the motion picture written and directed by John Carney; is one of the most successful movie to stage adaptations and won the hearts of millions around the world as it collected all the top awards. Once is the only show to win an Academy Award®, Grammy Award®, Olivier Award® and a Tony Award® for its unbelievable music. Once, The Musical made a transfer to Broadway from the New York Theatre Workshop in 2012. The Broadway production played for three years for 1,168 performances.

This production previously played at Virginia Repertory Theatre, February 6 through March 3. The cast, who acts as their own orchestra are: Ken Allen Neely as Guy plays Guitar (Guy in Once at Arden Theatre, New York Credits include Adam Pascal in Madame Pascal, Christian in Cobalteans and Nick in Puppet Dead); Katherine Fried as Girl plays Piano (Once at Arden Theatre, The Parchment Hour, King Lear at Guthrie Theater and Agatha Christie’s The Mousetrap at Kansas Repertory Theatre); Jon Patrick Penick as Billy plays Guitar, Cajon, and Tambourine (Billy and Eamon in Once at Paramount Theatre and TheatreSquared, respectively, and Bonnie and Clyde at Kokandy Productions); Lauren Wright as Reza plays the Violin and Tambourine (Ex-Girlfriend in Once at The Engeman Theatre, Saint Michael’s Playhouse, and Mason Street Warehouse, National Tours include Mamma Mia!, Sister Act as Sister Mary Robert, and Hairspray as Penny).

Christopher Seiler as Da plays the Mandolin (The Taming of the Shrew as Petruchio, The Merchant of Venice as Shylock, Hamlet as Claudius and forty-six other productions at American Shakespeare Center); Kelly Kennedy as Baruska plays the Accordion and the Bodhran during preshow (Mother in Da and Richmond Theatre Critics Circle Award-winner for Ethel in On Golden Pond at Virginia Repertory Theatre); Trevor Lindley Craft as Svec and Guy Understudy plays the Mandolin, Banjo, Guitar, Drum Kit, and the Cajon during preshow ( Brighton Beach Memoirs as Jerome, Da as Young Charlie at Virginia Repertory Theatre and Constellations as Roland at TheatreLab).

Lennon Hu as Andrej plays the Ukulele, Electric Bass, and the Cajon and the Tambourine during preshow (student at Virginia Commonwealth University, Airline Highway at Virginia Repertory Theatre); Andrew Nielson as Bank Manager plays the Cello, Cajon, Guitar and the Mandolin during preshow (Once as Bank Manager at Theatre Raleigh, New York credits include the world premiere production of The Unusual Tale of Mary and Joseph’s Baby at Firebone Theatre, and An Evening with Eustace and Laurie Brockovich at The Duplex); Hilary Alexa Caldwell as Ex-Girlfriend and Girl/Reza Understudy plays the Violin and Cajon (A Comedy of Errors as Luciana, Sense and Sensibility as Lucy Steele) and The Winter’s Tale as Old Shepherd at American Shakespeare Center).

Will Hart as Eamon plays the Guitar, Piano, Melodica, Harmonica, Cajon and Castanets (Disney’s Beauty and the Beast at Virginia Repertory Theatre, Luna Gale as Peter at 5th Wall Theatre, Romeo & Juliet at Virginia Shakespeare Festival); J. Michael Zygo as Emcee and serves as Dance Captain plays the Guitar and the Cajon and Harmonica during preshow (Original Broadway cast member and musician of Once as Emcee and Guy and Billy Understudy and Dance Captain, Broadway production of School of Rock, National Tours of Rock of Ages, Bridges of Madison County, Annie as Rooster, and Oklahoma! as Will Parker); Alice Dillon as Ivonka (2nd Grader at the School District of Lancaster, The Nutcracker with Donetsk Ballet Co. of Ukraine); and Caleb Hartsfield as Understudy for Emcee and Svec (Senior Musical Theatre Major at Pace where he recently played Javert in Les Misérables).

A complete list of dates and times is available at www.thefulton.org.