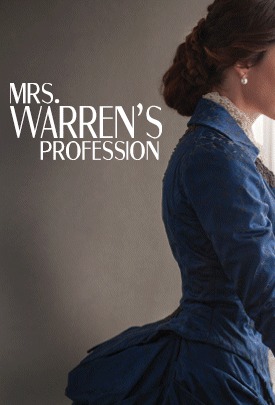 George Bernard Shaw’s classic comedy remains relevant today with provocative themes that include the plight of the working poor, the struggle women face to get ahead in business, and a young woman’s rebellious desire not to follow in her mother’s footsteps. Shaw wrote the play in 1893 to “draw attention to the truth that prostitution is not caused by female depravity… but simply by underpaying, undervaluing, and overworking women so shamefully that the poorest of them are forced to resort to prostitution to keep body and soul together.” A satire denouncing the hypocrisy of late Victorian Britain, Mrs. Warren’s Profession is more relevant than ever in our era of increasing economic inequality.

After years away at boarding school, Vivie is finally facing real life. She begins by meeting her mother, whom she hardly knows, the redoubtable Mrs. Warren. Two visions of the world clash: Vivie, a modern young woman, a feminist before her time, demands a certain equality of the sexes and seeks independence by earning a living. To secure a place in Victorian society, Mrs. Warren, an upscale madam, has operated houses of ill repute across Europe. The conflict that results between mother and daughter and their very different worldviews is compellingly critical of the unequal systems that have limited Mrs. Warren’s and Vivie’s options for independent lives.

Mrs. Warren’s Profession will be directed by Lantern Associate Artistic Director and two-time Barrymore nominee Kathryn MacMillan, who has helmed 15 productions at the Lantern, including last season’s Photograph 51 and Underneath the Lintel. MacMillan says, “I’m very happy to be working with Mary Martello again in our third production together – particularly on this marvelous script. Shaw wrote with deep integrity, and the resulting work is surprisingly witty, with richly drawn, recognizable characters and challenging arguments.”

“Shaw was deeply concerned with social and economic justice, and he sought to improve the lives of people for whom the industrial capitalism of the late Victorian era was an oppressive force,” says Lantern Artistic Director Charles McMahon. “As a dramatist Shaw set out to change society by artfully calling out the social hypocrisy of the time. With wit and irony he laid bare the flawed thinking of his times and did so in a way that his audience could assume that those being criticized were people other than themselves.”

Tickets for Mrs. Warren’s Profession go on sale today. Tickets are $24 – $39 and are available online at www.lanterntheater.org or by calling the Lantern Box Office at (215) 829-0395. Student tickets are $15 in advance; $10 student rush tickets are available 10 minutes before curtain with valid ID. Discounts are also available for theater industry professionals ($10 in advance or at the door), seniors 65 and up, groups of 10 or more, and U.S. military personnel. Season subscriptions and flex packages are also available starting at $95. Lantern Theater Company is located at St. Stephen's Theater, 10th & Ludlow Sts. in Center City Philadelphia.

George Bernard Shaw was an Irish playwright, polemicist, and early Socialist whose influence on Western theater, culture, and politics began in the 1880s and has extended beyond his death in 1950. Shaw was the leading dramatist of his generation and was awarded the Nobel Prize in Literature in 1925. He wrote over 60 plays, including Mrs. Warren’s Profession (1893), his witty and satirical skewering of laissez faire capitalism. Shaw considered it his best play. The British government disagreed, officially banning public performances for more than 30 years after its publication.

More information is online at www.lanterntheater.org