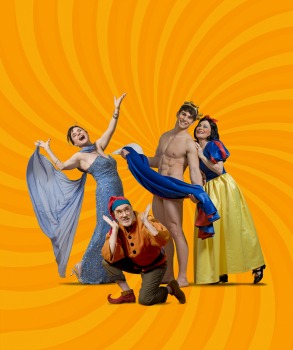 The master of comedy, Christopher Durang, mixes six distinct characters and dishes up a hilarious stew in Vanya and Sonia and Masha and Spike. Vanya and his adopted sister Sonia live a quiet life in the Pennsylvania farmhouse where they grew up, but their peace is disturbed when their movie star sister Masha returns unannounced with her twenty-something boy-toy, Spike. A weekend of rivalry, regret, and raucousness begins. "Will Vanya and Sonia ever find happiness? Will Masha sell the Bucks County farmhouse out from under them? And will Spike ever put his pants on?" writes USA Today.

Vanya and Sonia and Masha and Spike will be performed at Paper Mill Playhouse eight times a week, Wednesday through Sunday. Performance schedule: Wednesday at 7:30pm, Thursday at 1:30pm and 7:30pm, Friday at 8:00pm, Saturday at 1:30pm and 8:00pm and Sunday at 1:30pm and 7:00pm.  Tickets are on sale now and range from $28 to $99. Tickets may be purchased by calling 973.376.4343, at the Paper Mill Playhouse Box Office at 22 Brookside Drive in Millburn, or online at www.PaperMill.org. Visa, MasterCard, Discover, and American Express accepted. Groups of 10 or more can receive up to a 40% discount on tickets and should call 973.315.1680.  College students can order $20 rush tickets over the phone or in person at the Paper Mill Playhouse Box Office on the day of the performance.

“The thing I really admire about Vanya and Sonia and Masha and Spike is the way it jumps back and forth from funny to touching, and it does both very well,” commented director Don Stephenson.

Philippe Bowgen (Spike) appeared off-Broadway in The Danger of Bleeding Brown, Water and Power, Over the Horizon and Twilight: Los Angeles, 1992. Bowgen was seen in regional productions of Antony and Cleopatra, Oedipus el Rey, Darko Tresnjak’s Macbeth and more. His film credits include Son of a Kingpin, Sobrevivo and The Remains of Something Whole.

Carolyn McCormick (Masha) appeared in the Broadway companies of Equus, Private Lives and The Dinner Party. McCormick was seen off-Broadway in The Open House, Family Furniture, Black Tie, Celebration and more. In addition to playing Dr. Olivet on Law & Order, McCormick was a series regular on Spenser: For Hire and Cracker. She has been a guest star on Blue Bloods, Body of Proof, Cold Case, Judging Amy, The Practice, Homicide, Star Trek, L.A. Law and more. Her film credits include You Know My Name, Loverboy, Enemy Mine, Nights in Rodanthe, Whatever Works and Downtown Express.

Mark Nelson (Vanya) was seen in the Broadway productions of After the Fall, A Few Good Men, The Invention of Love, Bioxi Blues and others. Nelson appeared in productions of Timon of Athens at The Public Theater, Three Sisters at Roundabout, The Winter’s Tale at BAM, The Invention of Love at Lincoln Center and more. Some of his regional credits include Vanya and Sonia and Masha and Spike, Uncle Vanya, The Merchant of Venice, Underneath the Lintel, Talley’s Folly, Falsettos and I Am My Own Wife. Nelson’s television credits include The Good Wife, Unforgettable, Ed and Law & Order.

Michele Pawk (Sonia), a South Orange resident, won the 2003 Tony Award for Best Featured Actress in a Play for her performance as Louise in Hollywood Arms. Pawk received Drama Desk Award nominations for Cabaret and Crazy for You. On Broadway, Pawk also appeared in Hairspray, Losing Louie, Mamma Mia!, Chicago, Seussical, Triumph of Love and Mail. She appeared in off-Broadway productions of Giant, A Small Fire, The Paris Letter, Hello Again, Merry We Roll Along and more. Pawk’s television credits include Law & Order, Guiding Light, All My Children, Shannon’s Deal, The Golden Girls, L.A. Law and more.

Gina Daniels (Cassandra) was last seen on Broadway in All the Way. Daniels performed in regional productions of Doubt, Measure for Measure, As You Like It, A Christmas Carol and more. Jamie Ann Romero (Nina) appeared in regional productions of The Legend of Georgia McBride, The Three Musketeers, Romeo and Juliet, Sunsets and Margaritas, A Midsummer Night’s Dream and others.

Don Stephenson (Director) returns to Paper Mill Playhouse, where he directed Lend Me a Tenor and played John Adams in 1776. Mr. Stephenson directed Of Mice and Manhattan for the Millennium Stage at the Kennedy Center, Noises Off and The 39 Steps at the Flat Rock Playhouse, and The Great Unknown for the New York Musical Theatre Festival. Stephenson directed Titanic at Lincoln Center, the Hangar Theatre and the Muny. He directed critically acclaimed productions of Oleanna, Cat on a Hot Tin Roof, and the hit musical Doctors and Diseases at the Barter Theatre, which moved Off Broadway to the Players Theater. Other New York directing credits include Buck Simple (Garrick Gaieties), When Pigs Fly (Kaufman Theatre), Golden Voices (Symphony Space), Old Flames (Theatre-Studio Inc.) and a workshop of My Time of Day: The Music of Frank Loesser. Stephenson also directed The Desperate Hours and Through All Kinds of Weather at the Clarence Brown Theatre and Sleeping Beauty at American Stage Festival.

Christopher Durang (Playwright) won the 2013 Tony Award for Best Play for Vanya and Sonia and Masha and Spike. His other plays include Sister Mary Ignatius Explains It All for You, The Marriage of Bette and Boo, Betty’s Summer Vacation (all Obie Award winners), Miss Witherspoon (Pulitzer Prize finalist), A History of the American Film (Tony nomination, best book of a musical), Baby with the Bathwater, Durang/Durang (six one-act plays including the Tennessee Williams parody For Whom the Southern Belle Tolls), Sex and Longing, and many more. Also a performer, Mr. Durang has appeared in several of his own plays and cabaret acts. A New Jersey native, he attended Harvard College and the Yale School of Drama, and he is co-chair with Marsha Norman of Juilliard’s playwrights program. His numerous honors include the Lila Wallace–Reader’s Digest Writers’ Award, Guggenheim and Rockefeller fellowships, and induction into the American Theater Hall of Fame.

Enjoy coffee on us as director Don Stephenson discusses Vanya and Sonia and Masha and Spike.

Thurs. January 29 Learn more about the show you are about

Thurs. February 5 to see, led by members of Paper Mill's

Meet the cast and ask actors questions about the show or the role they are portraying.

Paper Mill Playhouse, a leader in accessibility, will offer audio-described performances of Vanya and Sonia and Masha and Spike on Saturday, February 14, and Sunday, February 15, at 1:30 pm. Prior to these performances at noon, the theater will offer free sensory seminars. Sensory seminars offer an opportunity for patrons with vision loss to hear a live, in-depth description of the production elements of the show and hands-on interaction with key sets, props, and costumes.  There will be a sign-interpreted and open-captioned performance on Sunday, February 15, at 7 pm.