Full Cast and Creative Team Announced for U.S. Premiere Production of THE HUNCHBACK OF NOTRE DAME at Paper Mill Playhouse 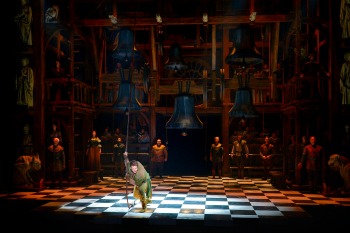 The Hunchback of Notre Dame is a dramatic retelling of the famous love story on a grand scale, with a lush, emotionally rich score. The musical features a score by Alan Menken (Disney's The Little Mermaid, Beauty and the Beast) and lyrics by Stephen Schwartz (Wicked, Pippin). This new production is the only stage collaboration between these two giants of the American musical theater.

“We’re thrilled to present the U.S. premiere of this epic musical with the support once again of Disney Theatrical Productions,” commented Mark S. Hoebee, Producing Artistic Director for the Millburn theater. “The score and the cast are magnificent and our audiences will get to experience an unprecedented 50 voices singing this beautiful music. We are excited to welcome two musical theater legends back to Paper Mill Playhouse, Alan Menken and Stephen Schwartz.”

Michael Arden (Quasimodo) appeared in the Broadway companies of The Times They Are A-Changin’ and Big River. Mr. Arden was seen off-Broadway in Bare, Swimming in the Shallows and It’s Only Life. Some of Arden’s television credits include Nurse Jackie, Grey’s Anatomy, The Good Wife, Anger Management, Kings, The Closer and more.

Patrick Page (Dom Claude Frollo) was seen on Broadway in Casa Valentina, A Time to Kill, Cyrano de Bergerac, A Man for All Seasons, Spider-Man: Turn Off the Dark, The Lion King, Julius Caesar and more. Mr. Page appeared in Carnegie Hall’s concert performance of The Sound of Music. Some of Page’s television credits include The Good Wife, Law and Order: SVU, One Life to Live and All My Children.

Ciara Renée (Esmeralda) starred as The Leading Player in the recent Broadway revival of Pippin. On Broadway, Renée also appeared in Big Fish. Ms. Renée was seen in productions of Sondheim on Sondheim, Dreamgirls, Carousel and Passing Strange among others.

Andrew Samonsky (Captain Phoebus de Martin) was seen on Broadway in The Mystery of Edwin Drood, Scandalous and South Pacific. Mr. Samonsky appeared in the Encores! productions of Fiorello! and Merrily We Roll Along.

Erik Liberman (Clopin Trouillefou), a resident of Hoboken, was in the Broadway production of Lovemusik. He appeared off-Broadway in Dani Girl, For Elise, Minnie’s Boys, Most Ridiculous Thing You Ever Hoid and Mabou Mines Dollhouse.

Alan Menken (Music) composed the stage and film musicals Little Shop of Horrors, Beauty and the Beast, The Little Mermaid, Newsies, Aladdin and The Hunchback of Notre Dame. His other stage musicals include A Christmas Carol, Sister Act and Leap of Faith. His film musicals also include Life With Mikey, Pocahontas, Hercules, The Shaggy Dog, Enchanted, Tangled and Mirror, Mirror.  Some of Mr. Menken’s television credits include the ABC-TV musical series Galavant, an episode from The Neighbors, Lincoln (miniseries) and Cartoon All-Stars to the Rescue. Mr. Menken has garnered eight Oscars (with 19 nominations), 11 Grammys (including Song of the Year), seven Golden Globes, the Tony (plus three nominations), the Olivier, the New York Drama Critics Award, induction into the Songwriters Hall of Fame and a star on the Hollywood Walk of Fame.

Stephen Schwartz (Lyrics) wrote the music and lyrics for Wicked and Pippin and contributed music and/or lyrics to Godspell, The Magic Show, The Baker’s Wife, Rags and Children of Eden. Mr. Schwartz’s film credits include Disney’s Pocahontas, The Hunchback of Notre Dame, and Enchanted (all in collaboration with Alan Menken) and DreamWorks’ The Prince of Egypt. Mr. Schwartz is the President of the Dramatists Guild of America and Artistic Director of ASCAP Musical Theatre Workshops. Mr. Schwartz’s awards and honors include the Theater Hall of Fame, the Songwriters Hall of Fame, the Hollywood Walk of Fame, three Academy Awards, four Grammy Awards and four Drama Desk Awards.

Peter Parnell (Book) wrote the new book for the 2011 Broadway revival of On a Clear Day You Can See Forever. Mr. Parnell’s plays include Trumpery, QED starring Alan Alda, a two-part adaptation of John Irving’s The Cider House Rules (American Theatre Critics Association Award), Sorrows of Stephen, The Rise and Rise of Daniel Rocket, Romance Language, Hyde in Hollywood, Flaubert’s Latest and An Imaginary Life. Mr. Parnell served as a co-producer for The West Wing (two Emmy citations) and a producer for The Guardian, Inconceivable, Six Degrees, and The Lottery.

Chase Brock (Choreographer) choreographed the Broadway productions of Spider-Man: Turn Off the Dark and Picnic. Mr. Brock’s off-Broadway work includes Irma La Douce, The Cradle Will Rock, Lost in the Stars, The Winter’s Tale, Much Ado About Nothing, The Tempest, Venice, The Blue Flower and more. His television work includes The Late Show with David Letterman and the Macy’s Thanksgiving Day Parade. He is founder and artistic director of the contemporary dance company The Chase Brock Experience.

Brent-Alan Huffman (Music Director & Conductor) served as musical director for the Broadway productions of Sister Act and Leap of Faith. On Broadway Mr. Huffman also served as the assistant conductor for Disney’s The Little Mermaid and Beauty and the Beast. He conducted the tours of Beauty and the Beast and Little Shop of Horrors.

Michael Starobin (Orchestrations) provided orchestrations for many Broadway shows including If/Then, Annie, Sondheim on Sondheim, Next to Normal (Tony Award), The 25th Annual Putnam County Spelling Bee, Assassins (Tony Award), Guys and Dolls, Falsettos, Sunday in the Park with George, Once on This Island and more. His film work includes The Hunchback of Notre Dame, Life with Mikey, Home on the Range, Tangled and Lucky Stiff.

Rob Berman (Dance Music Arranger) is music director of New York City Center Encores!, for which he has conducted 18 productions including Anyone Can Whistle, Merrily We Roll Along, and The Most Happy Fella. Mr. Berman’s Broadway credits as conductor include Wonderful Town, The Pajama Game, White Christmas, Finian’s Rainbow, The Apple Tree, and Promises, Promises, as well as ten original cast recordings. Mr. Berman has been nominated for five Emmy Awards for the Kennedy Center Honors (CBS), winning in 2012 for Outstanding Music Direction, and he music directed A Broadway Celebration: In Performance at the White House for PBS.

Paper Mill Playhouse, a leader in accessibility, will offer audio-described performances for The Hunchback of Notre Dame on Saturday, March 28, and Sunday, March 29, at 1:30 pm. Prior to these performances at noon, the theater will offer free sensory seminars. Sensory seminars offer an opportunity for patrons with vision loss to hear a live, in-depth description of the production elements of the show and hands-on interaction with key sets, props, and costumes.  There will be a sign-interpreted and open-captioned performance on Sunday, March 29, at 7 pm.

THE CONTINUO ARTS FOUNDATION is committed to making a difference in the lives of individuals, communities and cultures through music.  Supporting music education and musicians, Continuo Arts offers New Jersey’s most comprehensive intergenerational choral program inclusive of children through adult, senior citizens to professionals.  The Continuo Arts Foundation is known for providing all-encompassing and unforgettable local, national and international musical experiences in concerts, classes, workshops and throughout the education spectrum, leading to a lifelong love and support of the arts. Working in partnership with corporate and private sponsors, the Continuo Arts Foundation makes possible the education, performance and composition of music in ways which might otherwise be considered too unique or too expensive to be ordinarily undertaken.

The Tony Award-winning LA JOLLA PLAYHOUSE is internationally-renowned for creating some of the most exciting and adventurous work in American theatre, through its new play development initiatives, its innovative Without Walls series, as well as artist residencies and commissions, including BD Wong, Daniel Beatty and Kirsten Greenidge. Currently led by Artistic Director Christopher Ashley and Managing Director Michael S. Rosenberg, the Playhouse was founded in 1947 by Gregory Peck, Dorothy McGuire and Mel Ferrer, and reborn in 1983 under the artistic leadership of Des McAnuff, La Jolla Playhouse has had 25 productions transfer to Broadway, garnering 35 Tony Awards, among them Jersey Boys, Memphis, The Who’s Tommy, Big River, as well as Billy Crystal’s 700 Sundays and the Pulitzer Prize-winning I Am My Own Wife, both fostered as part of the Playhouse’s Page To Stage Program. Visit LaJollaPlayhouse.org.

DISNEY THEATRICAL GROUP (DTG) operates under the direction of Thomas Schumacher and is among the world’s most successful commercial theater enterprises, bringing live entertainment events to a global annual audience of more than 19 million people in more than 50 countries. Under the Disney Theatrical Productions banner, DTG produces and licenses Broadway musicals around the world, including Beauty and the Beast, The Lion King, Elton John & Tim Rice’s Aida, Tarzan, Mary Poppins (a co-production with Cameron Mackintosh), The Little Mermaid, Peter and the Starcatcher, and Newsies. Aladdin is its most recent Tony Award–winning Broadway hit; its most recent London production is the critically acclaimed comedy Shakespeare in Love. Other successful stage musical ventures have included King David in concert, the national tour of On the Record, several touring versions of Disney’s High School Musical, and Der Glöckner von Notre Dame in Berlin. DTG has collaborated with the country’s leading regional theaters to develop new stage titles, including Mary Zimmerman’s adaptation of The Jungle Book, and is proud to be working with La Jolla Playhouse and Paper Mill Playhouse on The Hunchback of Notre Dame. In addition, DTG licenses musical titles for local, school, and community theater productions through Music Theatre International.