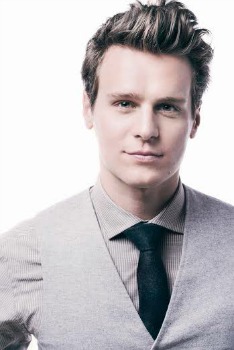 (Ephrata, PA) The Ephrata Performing Arts Center will present Broadway and Hollywood star Jonathan Groff in a benefit concert at EPAC’s Sharadin Bigler Theatre on January 31 at 8 pm. The theatre’s thrust stage and intimate setting provide an ideal space for an up-close performance with Jonathan, who will be accompanied on piano by acclaimed music director Mary-Mitchell Campbell.

Mr. Groff received a 2007 Tony nomination for Best Actor for creating the role of Melchior Gabor in the rock musical Spring Awakening. He appeared in a pair of off-Broadway Craig Lucas plays, Prayer for My Enemy and The Singing Forest, and Central Park productions of Hair and The Bacchae. He starred in the West End revival of Deathtrap before returning to New York to star in The Submission. He will be appearing in A New Brain at the New York City Center June 24–27, 2015.

Jonathan gained worldwide recognition for his role of Kristoff in Disney’s Frozen in 2013. Other movies include C.O.G., The Conspirator, and Taking Woodstock.

His television roles include Jesse St. James in the hit show Glee and the television movie The Normal Heart. He can currently be seen on HBO’s Looking.

An EPAC alumnus, Jonathan appeared the playhouse’s 2002 production of Honk in the role of Ugly. In 2004 he played the title role in the hit musical Bat Boy in the newly renovated Sharadin Bigler Theatre. EPAC Artistic Director Edward R. Fernandez says, “Jonathan Groff is EPAC family, and we could not be more proud of his success. He is a warm and wonderful performer, and we are thrilled to welcome him back on our stage.”

Jonathan’s performances in more intimate venues typically include show tunes, pop music, and specialty numbers. An after-party with Jonathan at Ephrata’s American Legion Cloister Post 429, across from the theater’s parking lot, can be chosen as part of a ticket option for this event. The performance portion of the ticket price is tax-deductible.

Tickets for EPAC Presents An Evening with Jonathan Groff will go on sale to the general public beginning Monday, January 12, at 12 pm. Ticket reservations will not be accepted before that time. Box Office staff can be reached at 717-733-7966 Monday through Friday from 12-4 pm. Tickets can also be purchased online at ephrataperformingartscenter.com/groff. Ticket prices for this benefit begin at $150, with several options available for seating and the after-party.

Proceeds from this event will benefit EPAC’s capital fund, and a special announcement about the fund will be made during the event.