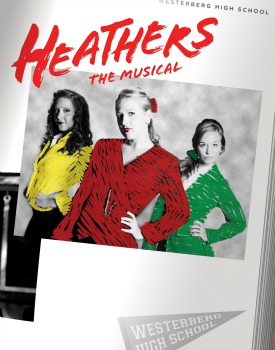 HAMMONTON, NJ – HEATHERS THE MUSICAL is making its South Jersey Professional Theatrical debut at the Eagle Theatre this March. The cult classic 80s film Heathers, which the musical is based off of, helped launch the careers of actors Winona Ryder, Christian Slater, and Shannen Doherty. The film spawned memorable phrases such as “What’s your damage?”, “It’ll be very,” and “Are we going to prom or to hell?” that have since enriched the 80s pop culture lexicon. In 2006, the film Heathers was included in the top five of Entertainment Weekly’s list of the “Greatest High School Movies of All Time”.

HEATHERS THE MUSICAL tells a similar darkly delicious tale of Veronica Sawyer, a brainy teenage misfit who hustles her way into the most powerful and ruthless clique at Westerberg High: the Heathers. But before she can get comfortable atop the high school food chain, Veronica falls in love with the dangerously sexy new kid, J.D.

When Heather Chandler, the Almighty, kicks her out of the group, Veronica decides to bite the bullet and make nice…but J.D. has another plan for that bullet.

Now, thanks to Olivier Award Winner and Tony Nominee Laurence O' Keefe and Emmy Award Winner Kevin Murphy, HEATHERS: THE MUSICAL has swept the nation! After a successful run Off-Broadway at New World Stages, Eagle Theatre Co-Artistic Director Ed Corsi got in line to be able to produce the energetic remake at the professional Equity Theatre in Hammonton. "HEATHERS is perfect for the Eagle Theatre stage", says Corsi. "We are hearing from patrons hundreds of miles away purchasing their tickets early to see this cult classic come to life on our stage".

Over the past year, the design team has been in pre-production, discussing aspects such as set design, lighting, and costumes. Scenic construction and technical plans begin on February 22nd and will feature mixed media and cutting edge theatrics. Corsi says, “In a short time, the Eagle has developed a reputation for creating an overall experience. With the plans we have for this production, patrons will not be disappointed”.

HEATHERS: THE MUSICAL will give fans of the film all of the satisfaction that the original movie provided, including the well-know lines and moments. In addition, the musical score written for the production has garnered the attention of musical lovers and non-musical lovers all over the world. "The score, to me, is really some of the best music written for a musical in years. It's an exciting, energetic 1980's infused pop/rock score with multiple musical influences", explains Corsi.

HEATHERS: THE MUSICAL runs March 18th through April 24th. Tickets can be purchased at www.TheEagleTheatre.com. For more information, please contact the box office at 609-704-5012. The Eagle Theatre is located at 208 Vine Street, Hammonton, NJ 08037

Note: HEATHERS: THE MUSICAL is recommended for ages 14 and over (some adult language and situations)