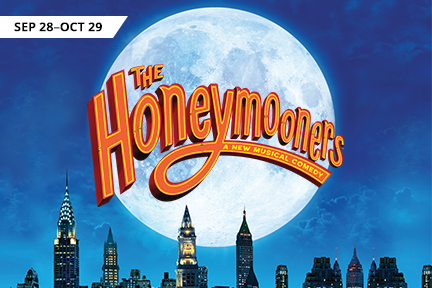 America’s favorite dreamers have a brand-new scheme. The Honeymooners is a world-premiere musical comedy inspired by the classic television series. Ralph Kramden and his buddy Ed Norton are back and still shooting for the moon. After shocking their wives by winning a high-profile jingle contest, they are catapulted out of Brooklyn and into the cutthroat world of Madison Avenue advertising, where they discover that their quest for the American Dream might cost them their friendship. Filled with big laughs and an infectious score, The Honeymooners will bang-zoom its way into your heart. 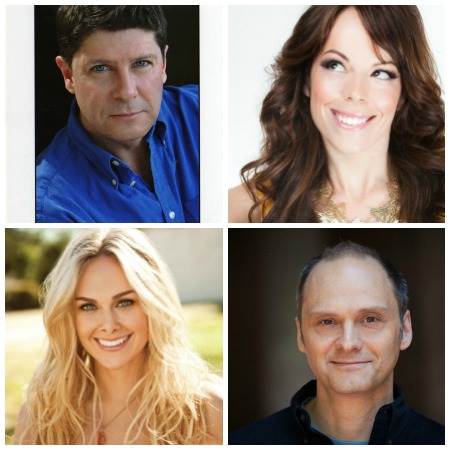 Tickets are on sale now starting at $34. Tickets may be purchased by calling 973.376.4343, at the Paper Mill Playhouse Box Office at 22 Brookside Drive in Millburn, or online at www.PaperMill.org. Visa, MasterCard, Discover, and American Express accepted. Groups of 10 or more can receive up to a 40% discount on tickets and should call 973.315.1680. Students may order $23 rush tickets over the phone or in person at the Paper Mill Playhouse box office on the day of the performance. Paper Mill Playhouse's 2017/2018 season is proudly sponsored by Investors Bank.

Subscribe & Save:  5-show, 4-show, and 3-show packages are available with outstanding benefits, including significant savings up to 40%. To subscribe, call 973.379.3717, visit PaperMill.org or come to the Paper Mill Box Office.

Lewis Cleale (Bryce Bennett) Broadway: The Book of Mormon, Sondheim On Sondheim, Spamalot, Amour, Once Upon A Mattress, Swinging On A Star. Off Broadway: A New Brain, The Fantasticks, Time and Again, Call Me Madam (Encores!) TV: “Elementary,” “BrainDEAD.” Lewis voiced Cliff the troll in Disney's FROZEN.

Lewis J. Stadlen (Old Man Faciamatta). Broadway: The Front Page, The Nance, Fish in the Dark, The Producers, The Man Who Came to Dinner (Drama Desk Award nomination), Laughter on the 23rd Floor, A Funny Thing Happened on the Way to the Forum (Tony Award nomination), The Female Odd Couple, Candide (Tony Award nomination), The Sunshine Boys, Minnie’s Boys (Drama Desk, Outer Critics Circle, Theatre World Awards). Some of his better films include Serpico, The Verdict, To Be or Not to Be, and In & Out. He has been seen on television in Damages, The Sopranos, and Smash.

Bill Nuss (Book) is a television show runner, writer, and producer. He has produced, written, or created over 300 hours of network prime-time series. In addition to Hawaii Five-0 and NCIS, he worked with his mentor, the late Stephen J. Cannell, on Fox’s first hit, 21 Jump Street starring Johnny Depp, Booker, The A-Team, and the NBC television movie The Return of Hunter: Everyone Walks in L.A. starring Fred Dryer and Miguel Ferrer. Bill was the creator and executive producer of Pacific Blue starring Mario Lopez. The show was USA Network’s highest-rated series during its reign.

Peter Mills (Lyrics) wrote the score, with Stephen Weiner, for Off Broadway’s Iron Curtain (book by Susan DiLallo), also seen at NAMT, the O’Neill Center, and the Village Theatre. As a composer-lyricist, Peter’s shows include Illyria, The Taxi Cabaret, and Golden Boy of the Blue Ridge. Peter has won the Kleban Prize, Fred Ebb Award, the ASCAP Foundation’s Richard Rodgers Award and Cole Porter Award, and a Jonathan Larson Grant, and he received two Drama Desk Award nominations for The Pursuit of Persephone (outstanding music, outstanding orchestrations.) He is a founding member of Prospect Theater Company and a graduate of NYU’s Musical Theatre Writing Program.

John Rando (Director) Selected Broadway: On the Town (Tony nomination), Penn & Teller on Broadway, A Christmas Story, The Wedding Singer, Urinetown (Tony and Outer Critics Circle Awards), A Thousand Clowns, The Dinner Party. Off Broadway: Lives of the Saints, The Heir Apparent (SDCF Callaway Award), All in the Timing (Obie Award), The Toxic Avenger, among others. Recent regional: Pirates of Penzance (Barrington), Big Sky (Geffen Playhouse). City Center Encores!: The New Yorkers, Annie Get Your Gun, Little Me, It’s a Bird…It’s a Plane…It’s Superman, Gentlemen Prefer Blondes, On the Town, Damn Yankees, Face the Music, Strike Up the Band, Do Re Mi, The Pajama Game, Of Thee I Sing. He also directed Rodgers and Hammerstein’s Carousel for the New York Philharmonic.

Doug Besterman (Orchestrations) Since 1992, Doug has been in-demand as an arranger/orchestrator for Broadway shows, films, and recordings - past projects include: The Producers (stage and film), Chicago (film), Sister Act (stage), How to Succeed (stage) and Nine (film). He has been privileged to work with some of the most recognizable names in the industry, including composers Mel Brooks and Alan Menken, recording artists Barbra Streisand and Barry Manilow, and directors Rob Marshall and Susan Stroman. He has also earned some of the industry's top honors, including 3 Tony Awards, 2 Drama Desk Awards and a Grammy Award nomination.

Sam Davis (Dance Arrangements). Broadway credits as arranger, orchestrator and/or conductor include An American in Paris, Prince of Broadway, Holiday Inn, Gigi, Side Show, Drood, Big Fish, Scandalous, and Curtains.  As composer: Bunnicula, Red Eye of Love, Love and Real Estate (all off-Broadway), The Taming of the Shrew (Shakespeare in the Park.) Regional: Little Dancer and The Trumpet of the Swan (the Kennedy Center), Stilyagi (NY Stage & Film). Film & TV: Hail Caesar, Beauty and the Beast (2017), and “Good Behavior.” Recordings include Love on a Summer Afternoon (P.S. Classics) and the original cast albums of Bunnicula (Yellow Sound) and Red Eye of Love (Ghostlight.) Winner of the Jonathan Larson Award and a graduate of the University of Michigan School of Music.

Beowulf Boritt (Scenic Design). Paper Mill: A Bronx Tale. Broadway: Act One (Tony Award), The Scottsboro Boys (Tony nomination), Thérèse Raquin (Tony nomination), Prince of Broadway, Sunday in the Park with George (2017), Come from Away, A Bronx Tale, Hand to God, On the Town, Sondheim on Sondheim, …Spelling Bee, Lovemusik, Rock of Ages, Chaplin, Bronx Bombers, Grace, The Two and Only. Off Broadway: 100 shows including The Last Five Years, The Toxic Avenger, and Miss Julie. Work ranges from NYC Ballet to the Ringling Bros. Circus and internationally in England, Russia, China, Australia, and Japan. He received the 2007 Obie Award for Sustained Excellence in Set Design.

Jess Goldstein (Costume Design) Selected credits include: On the Town, Jersey Boys, Disney’s Newsies, The Merchant of Venice with Al Pacino (Tony nomination), Henry IV with Kevin Kline (Tony nomination), The Rivals (2005 Tony Award), The Apple Tree with Kristin Chenoweth, Orphans with Alec Baldwin, Buried Child, Proof, Take Me Out, Love! Valour! Compassion!, How I Learned to Drive, Dinner with Friends, The Mineola Twins (Lortel and Hewes Awards), Il Trittico for the Metropolitan Opera, and Tony Goldwyn’s film A Walk on the Moon. Paper Mill: Seven Brides…, Newsies, Ever After. Jess is a graduate of the Yale School of Drama and has taught design there since 1990. 2015 recipient of the Irene Sharaff Lifetime Achievement Award.

Paper Mill Playhouse, a leader in accessibility, will offer audio-described performances for The Honeymoners on Sunday, October 22, 2017, at 1:30pm and Saturday, October 28, 2017, at 1:30pm. Prior to these performances at noon, the theater will offer free sensory seminars. Sensory seminars offer an opportunity for patrons with vision loss to hear a live, in-depth description of the production elements of the show and hands-on interaction with key sets, props, and costumes.  There will be a sign-interpreted and open-captioned performance on Sunday, October 29, 2017, at 7:00pm.

Conversation Club: Join us Thursday evenings, September 28, October 5, 12 and 19, one hour before curtain for an informal, informative gathering. You'll learn more about the performance you're about to see.

The Director's Viewpoint: One hour before curtain at 6:30pm on Wednesday, October 4, we host a pre-show discussion in the Renee Foosaner Art Gallery.

Q&A with the Cast: After the matinee on Saturday, October 28, stick around for a lively Q&A with cast members directly following the performance.

PAPER MILL PLAYHOUSE, a not-for-profit arts organization under the direction of Mark S. Hoebee (Producing Artistic Director) and Todd Schmidt (Managing Director) and recipient of the 2016 Regional Theatre Tony Award, is one of the country's leading regional theaters.  Paper Mill Playhouse programs are made possible, in part, by funds from the New Jersey State Council on the Arts. Paper Mill Playhouse is a member of the National Alliance for Musical Theatre, the Council of Stock Theatres, and the New Jersey Theatre Alliance.