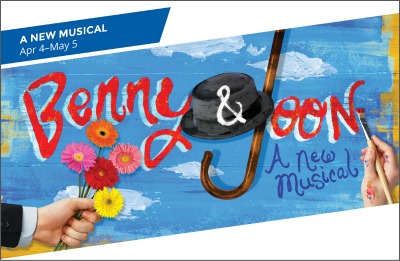 Directed by Jack Cummings III, with choreography by Scott Rink and music direction by J. Oconor Navarro, the principal cast features Claybourne Elder (Sunday in the Park with George) as Benny, Hannah Elless (Paper Mill’s The Other Josh Cohen) as Joon, Bryce Pinkham (A Gentleman’s Guide to Love and Murder) as Sam, Conor Ryan as Sam at certain performances, (Paper Mill’s My Very Own British Invasion) and Tatiana Wechsler (Oklahoma) as Ruthie, with Colin Hanlon (Falsettos) as Mike, Paolo Montalban (Paper Mill’s The King and I) as Larry, Natalie Toro (A Tale of Two Cities) as Dr. Cortez/Mrs. Smail, Jacob Keith Watson (Carousel) as Waldo/Video Store Owner and Belinda Allyn (Paper Mill’s West Side Story).

Based on the 1993 film starring Johnny Depp and Mary Stuart Masterson, this new musical is a smart, funny, tender-hearted celebration of love: between children and parents; romantic partners; friends; and, most of all, siblings. The pair at the heart of the show are Joon, a young woman dealing with mental illness, and Benny, the big brother who’s determined to take care of her. When a charmingly eccentric stranger comes into their lives, he throws their carefully calibrated world off-kilter—maybe for the better. Large in emotional scope and artistic ambition, Benny & Joon embraces a difficult subject with warmth, honesty, and wit.

Benny & Joon will be performed at Paper Mill Playhouse eight times a week, Wednesday through Sunday. Performance schedule: Wednesday at 7:30pm, Thursday at 1:30pm and 7:30pm, Friday at 8:00pm, Saturday at 1:30pm and 8:00pm and Sunday at 1:30pm and 7:00pm. Tickets are on sale now starting at $34. Tickets may be purchased by calling 973.376.4343, at the Paper Mill Playhouse Box Office at 22 Brookside Drive in Millburn, or online at www.PaperMill.org. All major credit cards accepted. Groups of 10 or more may receive up to a 40% discount on tickets and should call 973.315.1680. Season subscriptions are on sale now and are available by calling 973.379.3717.  Students may order $23-$28 rush tickets over the phone or in person at the Paper Mill Playhouse Box Office on the day of the performance.

BELINDA ALLYN (Standby for Joon, Ruthie, Dr. Cortez/Mrs. Smail) is thrilled to be back at Paper Mill Playhouse! She was previously seen at Paper Mill as Maria in West Side Story. Other credits include Allegiance (Broadway), understudy Imelda in Here Lies Love (Seattle Rep), Maria in West Side Story (Riverside Theatre), and Mrs. Claus in the Radio City Christmas Spectacular (NYC). Graduate of Oklahoma City University.

COLIN HANLON (Mike) has a recurring role on “Modern Family” as Steven. He has had guest starring roles on “Difficult People,” “The Sinner,” “The Good Fight,” and in the upcoming film Yes. Co-producer and star of the web series “Submissions Only.”  The New York premiere of Dot (Vineyard, dir. Susan Stroman) and A. R. Gurney’s last play Final Follies (Cherry Lane, dir. David Saint). Broadway: Falsettos, Rent, Wicked (tour), In Transit. Four shows at George Street Playhouse, most recently The Nerd (dir. Kevin Cahoon); four seasons at NYS&F and the O’Neill; Next Fall (St. Louis Rep). Off-Broadway includes I Love You Because and Pirates of Penzance.

PAOLO MONTALBAN (Larry) returns to Paper Mill with his fourth production.  He appeared in The King and I, R&H’s Cinderella, and Nine. He is most recognized as the Prince in ABC/Disney’s TV musical movie of “Cinderella “(with Brandy and Whitney Houston). Broadway: Breakfast at Tiffany’s, Pacific Overtures, The King and I. Off-Broadway: Bella: An American Tall Tale (Playwrights Horizons—Lortel nomination), Two Gentlemen of Verona (Delacorte). Regional: Mamma Mia! (5th Avenue), The Unsinkable Molly Brown (Denver Center). TV: “Mortal Kombat: Conquest” as Kung Lao, “Madam Secretary,” “The Blacklist.” Film: Just Wright, The Great Raid.

NOLAN GASSER (Music) is a critically acclaimed composer, pianist, and musicologist—notably, the architect of Pandora Radio’s Music Genome Project. He holds a PhD in Musicology from Stanford University. His original compositions have been performed at Carnegie Hall, Lincoln Center, among others. Theatrical projects include the musicals Benny & Joon and Start Me Up and the opera The Secret Garden. His book, Why You Like It: The Science and Culture of Musical Taste (Macmillan), will be released on April 30, 2019, followed by his rock/world CD Border Crossing in June 2019. His TEDx Talk, “Empowering Your Musical Taste,” is available on YouTube.

JACK CUMMINGS III (Director) is the artistic director of Transport Group, where his select credits include Summer and Smoke (coproduction with Classic Stage Company), Renascence (codirected with Dick Scanlan), The Trial of the Catonsville Nine, Queen of the Mist, The Audience, Strange Interlude, I Remember Mama, Normal, Once Upon a Mattress, Picnic, The Boys in the Band, and Our Town. Other NY credits: Terrence McNally’s And Away We Go, A Thousand Words Come to Mind, Arlington. Regional credits: Benny & Joon (Old Globe), I Remember Mama (Two River). BA, The College of William & Mary; MFA, University of Virginia. He is married to Barbara Walsh.

SCOTT RINK (Choreographer). Off Broadway: Renascence, Once upon a Mattress, Three Days to See, Queen of the Mist, Hello Again, (Transport Group, dir. Jack Cummings III). Regional: Benny & Joon (The Old Globe), Alice in Wonderland (Birmingham Children’s Theatre). Commissioned works include dances for Ailey II, ABT II, Oakland Ballet, The Ailey School, Harvard University, UNCSA, University of Minnesota, among others. Mr. Rink has created a number of works for his company, danceRINK, performed in NYC and abroad. As a dancer, Mr. Rink performed in the companies of Eliot Feld, Elisa Monte, and Karole Armitage and as principal dancer with Lar Lubovitch.

NORA BRENNAN, CSA (Casting) a NYC-based casting director. Broadway: Children’s casting director for Billy Elliot: The Musical, Matilda, The Audience starring Helen Mirren. Nora is resident casting director for Transport Group in NYC. Select musicals and plays: Summer and Smoke (Classic Stage Company); Picnic; Come Back, Little Sheba; Renascence; And Away We Go; Queen of the Mist; Hello Again; All the Way Home; The Dark at the Top of the Stairs; and others. She also cast West Side Story at La Scala Opera House and for the past three years has cast the boys for the Radio City Christmas Spectacular.

Paper Mill Playhouse, a leader in accessibility, will offer audio-described performances for Benny & Joon on Sunday, April 28, 2019, at 1:30pm and Saturday, May 4, 2019, at 1:30pm. Prior to these performances at noon, the theater will offer free sensory seminars. Sensory seminars offer an opportunity for patrons with vision loss to hear a live, in-depth description of the production elements of the show and hands-on interaction with key sets, props, and costumes.  There will be a sign-interpreted and open-captioned performance on Sunday, May 5, 2019, at 7:00pm.

CONVERSATION CLUB: Join us Thursday evenings, April 4, 11, 16, and 25 one hour before curtain for an informal, informative gathering. You'll learn more about the performance you're about to see.

THE DIRECTOR'S VIEWPOINT: One hour before curtain, at 6:30pm, on Wednesday, April 10, we host a pre-show discussion in the Renee Foosaner Art Gallery.

Q&A WITH THE CAST: After the matinee on Saturday, May 4, stick around for a lively Q&A with cast members directly following the performance.

Paper Mill Playhouse’s 80th anniversary season concludes with Disney’s Beauty and the Beast (May 29-June 30), an international sensation that has played to more than 35 million people in 13 countries. Based on the Academy Award-winning animated feature, the stage production includes all of the original songs from the movie by Alan Menken and Howard Ashman, plus additional gems by Menken and Tim Rice.

PAPER MILL PLAYHOUSE, a not-for-profit arts organization under the direction of Mark S. Hoebee (Producing Artistic Director) and Mike Stotts (Managing Director), recipient of the Regional Theatre Tony Award, is one of the country's leading regional theaters.  Paper Mill Playhouse programs are made possible, in part, by funds from the New Jersey State Council on the Arts, a partner agency of the National Endowment for the Arts. Paper Mill Playhouse is a member of the National Alliance for Musical Theatre, the Council of Stock Theatres, and the New Jersey Theatre Alliance. For additional information, please visit www.papermill.org.