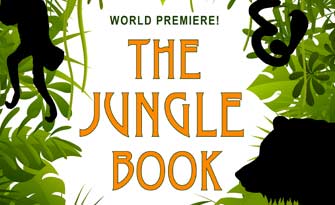 Filled with adventure, The Jungle Book introduces Bagheera, Shere Kahn, the python Kaa, and Baloo the Bear, as Mowgli the man-cub learns to navigate the laws of the jungle. Brought to life by 5 actors, The Jungle Book reunites the creators of the Arden’s Robin Hood and Pinocchio for an exciting new version based on Rudyard Kipling’s classic stories.

Director and Arden Associate Artistic Director Matthew Decker says, “Arden Children’s Theatre is known for presenting classic stories in new and imaginative ways and The Jungle Book will be no different. The jungle will come to life through the use of movement, light and an inventive set. The audience will play a huge part in helping to create the aural landscape of the jungle. We hope to spark children’s imaginations and make them a part of the action by ‘casting’ them as monkeys and other inhabitants of the jungle.”

The Jungle Book opens in previews on Wednesday, April 15, 2015.  It runs through Sunday, June 21, 2015. A full calendar of events can be found here. Opening Night Sponsors are Harmelin Media, Hatboro Beverages and 12th Street Catering.

The Jungle Book includes weekday matinee performances for students and weekend performances for families. Single ticket prices are $18-$36, with discounts available for groups of 20 or more, seniors, students, military, and educators. Call the Arden Box Office at 215.922.1122, or visit www.ardentheatre.org or walk-up at the box office at 40 N. 2nd Street in Old City, Philadelphia.

Founded in 1988, Arden Theatre Company is dedicated to bringing to life great stories by great storytellers–on the stage, in the classroom, and in the community. Five productions are staged each season as part of the Mainstage series and two productions through Arden Children’s Theatre, the city’s first resident professional children’s theatre program. New work is produced through the Independence Foundation New Play Showcase. The Arden’s Education Department includes: Arden for All (AFA), a theatre access and education program for underserved young people; Arden Drama School, the after-school, Saturday, and summer camp classes for students in grades pre K-12; Teen Arden, an immersive after-school access program for Philadelphia-area based teenagers; and the Arden Professional Apprentice Program, a nationally renowned comprehensive theatre management training program. The Hamilton Family Arts Center is the new facility dedicated to education programs and new play development.

The Arden has received numerous honors including 62 awards and 301 nominations from the Barrymore Awards for Excellence in Theatre.  The Arden is a winner of four “Theatre Company of the Year” designations (Philadelphia Inquirer), five Philadelphia Magazine “Best of Philly” awards and three “Best of Philly Kids” awards, the City Paper’s Reader’s Choice Award and the prestigious “Great Friend to Kids Award” from the Please Touch Museum for Arden Children’s Theatre work. For accessibility efforts, the Arden was named a “Keystone of Accessibility” by the Commonwealth of Pennsylvania. Arden Theatre Company is a professional, nonprofit 501(c)(3) theatre company and a member of the Theatre Communications Group, the League of Resident Theatres, Greater Philadelphia Cultural Alliance, Philadelphia Convention and Visitors Bureau, and Old City Arts Association. The Arden also participates in The Barrymore Awards, a program of Theatre Philadelphia.