(Philadelphia, PA) Arden Cabaret Series, in its inaugural season at the Arden Theatre Company, presents vocalist, actress and multifaceted entertainer Joilet Harris. Her cabaret, FROM ME TO YOU WITH LOVE is on stage Friday, February 12 and Saturday, February 13, 2016, at 8pm in the Arden’s 100-seat Studio Theatre at the Hamilton Family Arts Center, 62 N. 2nd Street in Old City, Philadelphia.

Joilet Harris is a Philadelphia treasure. At the Arden, her searing portrait of Lena Younger in the Arden’s production of A Raisin in the Sun and her Barrymore award-winning turn as Caroline Thibodeaux in Caroline, or Change rank among the great performances in our company’s history. Throughout her 30 year career, Joilet consistently proves that she is a powerful and dynamic presence on stage as well as on television, with roles on The Wire, Do No Harm and Law & Order: SVU. Joilet has also toured the world as a vocalist, most recently playing Ella Fitzgerald in Ella, The Ella Fitzgerald Story. She has appeared on many Philadelphia stages including the Walnut Street Theatre, Act 2 Playhouse, People’s Light and Theatre Company and Delaware Theatre Company. She most recently starred as Gloria in the Broadway-bound Because of Winn Dixie and has also appeared as Motormouth Maybelle in Hairspray, Miss Jones in How to Succeed in Business… and in Ain’t Misbehavin’ and It Ain’t Nothin But the Blues. In addition to her many talents, Harris is a founding and former board member of The Philadelphia Black Theatre Festival, and is an active member of the Enon Tabernacle Baptist Church where she serves as a soloist choir member and assistant choir director.

FROM ME TO YOU WITH LOVE features love-themed songs from the 1920’s to today and is the perfect way to celebrate Valentine’s Day. Songs include an eclectic mix – from 1920’s flapper songs to today’s Jill Scott and Adele. Half ballads and half not, artists and songs like Natalie Cole, Roberta Flack, Stevie Wonder and Etta James’s At Last will be featured. Harris says the Natalie Cole songs will honor the late singer, who died last month.

Harris enjoys getting inspiration from her audience members during cabaret performances in the form of audience participation. During FROM ME 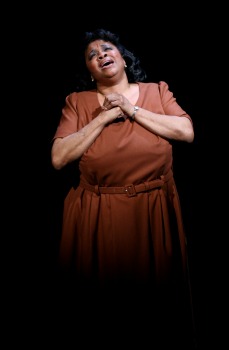 TO YOU WITH LOVE, Harris will ask audience members to read quotes about love that they are given as they enter the space. The quotes will help guide her song selection and the order they are sung. She may even ask an audience member to sing a duet with her.

The Arden Cabaret Series was created to provide an opportunity for artists to perform, develop and present work that is important to them, and offers a unique and intimate conversation between Arden artists and audiences.

Arden Artistic Associate Matthew Decker says, “When we opened the Hamilton Family Arts Center we realized we have the perfect space for cabaret in our 100-seat Studio Theatre. Many of our cabaret performers work regularly at the Arden and at other theatres in the region, and the intimacy of the Studio Theatre gives our audiences, and perhaps new audiences, a chance to see their favorite performers in an up-close and personal way.”

Decker adds, “We realize that the local cabaret scene often features performers from outside of Philly. Philadelphia is home to some of the finest actors in the region, and to be able to showcase those talents is both thrilling for us and deserved for them.”

Next up in the Arden Cabaret Series is actress and vocalist Kristine Fraelich on Friday, April 22 and Saturday, April 23, 2016.

Tickets are $30 for general admission seating and $200 for one of four tables that seats four patrons each. Table patrons can BYOB. Arden donors and subscribers receive a $5 ticket discount. For tickets, call the Arden Box Office at 215.922.1122, visit here or walk-up at the box office at 40 N. 2nd Street in Old City, Philadelphia.

Founded in 1988, Arden Theatre Company is dedicated to bringing to life great stories by great storytellers–on the stage, in the classroom, and in the community. Five productions are staged each season as part of the Mainstage series and two productions through Arden Children’s Theatre, the city’s first resident professional children’s theatre program. New work is produced through the Independence Foundation New Play Showcase. The Arden’s Education Department includes: Arden for All (AFA), a theatre access and education program for underserved young people; Arden Drama School, the after-school, Saturday, and summer camp classes for students in grades pre K-12; Teen Arden, an immersive after-school access program for Philadelphia-area based teenagers; and the Arden Professional Apprentice Program, a nationally renowned comprehensive theatre management training program. The Hamilton Family Arts Center is the new facility dedicated to education programs and new play development.

The Arden has received numerous honors including 62 awards and 307 nominations from the Barrymore Awards for Excellence in Theatre. The Arden is a winner of four “Theatre Company of the Year” designations (Philadelphia Inquirer), six Philadelphia Magazine “Best of Philly” awards and three “Best of Philly Kids” awards, the City Paper’s Reader’s Choice Award and the prestigious “Great Friend to Kids Award” from the Please Touch Museum for Arden Children’s Theatre work. For accessibility efforts, the Arden was named a “Keystone of Accessibility” by the Commonwealth of Pennsylvania. Arden Theatre Company is a professional, nonprofit 501(c)(3) theatre company and a member of the Theatre Communications Group, the League of Resident Theatres, Greater Philadelphia Cultural Alliance, Philadelphia Convention and Visitors Bureau, and Old City Arts Association. The Arden also participates in The Barrymore Awards, a program of Theatre Philadelphia.