It’s Agatha Christie at Her Murderous Best! AND THEN THERE WERE NONE at Walnut Street Theatre

Philadelphia, PA: Walnut Street Theatre continues its landmark 206th season with Agatha Christie’s And Then There Were None. Directed by Charles Abbott, this production begins previews on March 10th, opens on March 18th and runs through April 26th on the Walnut’s Mainstage.

And Then There Were None (formerly known as Ten Little Indians) tells the story of ten strangers who are lured by a mysterious host for a relaxing weekend at a remote island resort. Once the guests have arrived there is a suspicious death. The guests are trapped. The host accuses each person, via a recording, of having escaped justice for a past murder. Unable to leave the island, the guests begin to share their darkest secrets...until they begin to fall, one by one! The ever dwindling party rushes to unmask the hidden killer in their midst. Who is the murderer? Who is next? Agatha Christie's And Then There Were None will keep audiences guessing right up until the very end.

And Then There Were None is not only Dame Agatha Christie’s best-selling novel, but the world’s best-selling mystery. Over 100 million copies of the book have been sold to date in 50 different languages. The success of her novel, published in 1939, led to And Then There Were None becoming her most adapted work. The stage adaptation came in 1943 with a world premiere at the Wimbledon Theatre in London. In November of that same year the production transferred to the West End. Its Broadway premiere came in June, 1944 under the title Ten Little Indians.

The novel has seen many adaptations for film, radio and television. In 2005 it was adapted to a video game, the first in a series of games based on Christie’s novels. The story also became the basis for a board game in 2007.

Walnut Street Theatre produced another of Agatha Christie’s popular works, The Mousetrap, in 2012. The show became the most popular non-musical in the theatre’s history as a non-profit.

Award-winning Director Charles Abbott will lead the Walnut’s production. Abbott is the recipient of five Barrymore nominations, winning for his 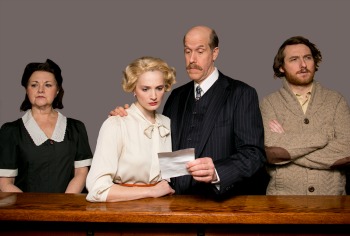 direction of 42nd Street (2007) and his performance in Cabaret (1996) at the Walnut. He has been involved in over 25 Walnut Street Theatre productions in a variety of roles including actor, director and choreographer. Abbott served as the Artistic Director for Maine State Music Theatre for 20 seasons, and has been a part of both Broadway and National Touring productions. His directing credits at the Walnut include Arsenic and Old Lace, Hairspray, Crazy for You, Annie and The Sound of Music.

The design team creating the home located on the secluded island, draped in tones of browns and greys, with hints of blood red, is led by Scenic Designer Andrew Thompson (The Rise and Fall of Little Voice, Mickle Street). Thompson will be joined by Costume Designer Julia Poiesz (Bad Jews, Doubt), and award-winning Sound Designer Christopher Colucci (The Mousetrap, Amadeus). Lighting and Projection Designer Kendall Smith and Video Designer Dan Roach will make their Walnut debuts with this production.

Agatha Christie’s And Then There Were None runs at the Walnut March 10 through April 26. Media Sponsor is NBC 10. For tickets and information, call 215-574-3550 or 800-982-2787. Tickets are also available online 24/7 by visiting http://www.WalnutStreetTheatre.org or Ticketmaster.

Photo 1: Jessica Bedford, Peter Schmitz and Harry Smith in Agatha Christie’s And Then There Were None at Walnut Street Theatre. Photo by Brae Howard.

Photo 2 -  Sharon Alexander, Jessica Bedford, Peter Schmitz and Harry Smith in Agatha Christie’s And Then There Were None at Walnut Street Theatre. Photo by Brae Howard.