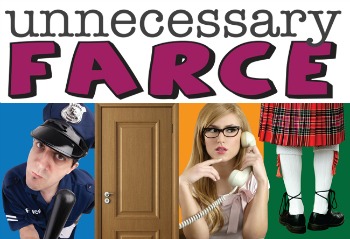 Unnecessary Farce combines classic farce with a contemporary American plot. In a hotel room, an embezzling mayor is supposed to meet with his new accountant. In the room next door, two undercover cops are supposed to catch the meeting on videotape. But there's some confusion as to who's in which room, who's watching the video, who's taken the money, who's hired a hit man, and why the accountant keeps taking off her clothes.

Since its premiere in 2006, there have been more than 150 productions of Unnecessary Farce.

"Paul Slade Smith has had success all over the country with this show, and with good reason: it's funny," said Act II Playhouse Artistic Director Tony Braithwaite. "Audiences who like a good old-fashioned, door-slamming comedy will laugh their heads off at this hysterical show."

Smith was an actor before he was a playwright; he wrote Unnecessary Farce while performing in the national tour of Phantom of the Opera. He is set to make his Broadway debut in Finding Neverland in March.

The cast features seven of Philly's top actors: Anthony Lawton and Karen Peakes are the cops; Susan McKey is the accountant; Tom Teti and Gerri Weagraff are the mayor and his wife; Jake Blouch is the Scottish hit man; and Akeem Davis is the mayor's security officer.

Tickets for Unnecessary Farce are $24-$35 with discounts available for subscribers, seniors 65 and older, and students. Tickets are available by calling the Act II Box Office at (215) 654-0200, in person at 56 E. Butler Ave. in Ambler, or online at www.act2.org. Box office hours are 2 to 6 p.m., Monday through Saturday.

Act II Playhouse, now in its 16th season of professional theatre in the Philadelphia suburb of Ambler, PA, is committed to creating world-class theatre in a venue whose intimacy draws audiences and actors into dynamic interaction. Act II produces new, classic, and contemporary plays and musicals under the direction of Tony Braithwaite (Producing Artistic Director) and Howie Brown (Managing Director).