Act II Playhouse presents the world premiere of ON THE ROAD AGAIN, with Tony Braithwaite and Jennifer Childs, Jan. 12-31, 2016 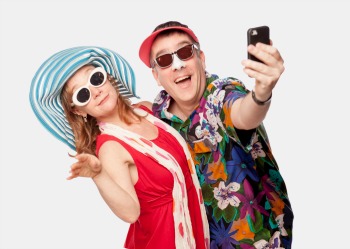 On the Road Again looks at travel, vacations, and that need to get away from it all. This hilarious new show features skits, songs, and improv comedy.

"I am so excited to be performing again with Jen Childs in this brand new - and funny - show," Braithwaite said. "We're cracking ourselves up in rehearsals, which is always a good sign."

Skits include "Celebrity GPS," where Tony and Jen will perform impressions of celebrities as if they were giving driving instructions, and the return of TB and Jenny, a faux cruise ship lounge act.

This is Tony and Jen's third comedy cabaret. The two previous shows, Let's Pretend We're Married and Let's Pretend We're Famous, both premiered at 1812 Productions in Philadelphia, where Childs is Producing Artistic Director, and then had subsequent sold-out runs at Act II Playhouse.

Patrons are encouraged to buy tickets to On the Road Again soon, as availability is limited. More than 80% of tickets are already sold a month before the first performance. A full schedule of performances is available online here.

ABOUT TONY AND JEN

Tony Braithwaite is in his fourth season as Artistic Director of Act II Playhouse, having most recently appeared here in According to Goldman andForbidden Broadway's Greatest Hits. Other recent work here includesMaking Spirits Bright, Rounding Third, and Didn't Your Father Have This Talk With You? Tony has worked in and around Philly since 1995 (as an actor, director, writer, and comic) and has also appeared at 1812 Productions, Arden Theatre Company, Philadelphia Theatre Company, The Kimmel Center, Delaware Theatre Company, Hedgerow Theatre, Montgomery Theater, and both the PA and Philadelphia Shakespeare Festivals, among others. Tony is a 13-time Barrymore Award nominee, a 4-time Barrymore M.C., and a 3-time Barrymore winner, including wins for The Big Bang andThe Story of My Life (both at Act II). For 22 years, Tony has also served as Director of Dramatics at his beloved alma mater St. Joe's Prep, where he was recently presented with the school's highest honor, The Ignatian Award.

Jennifer Childs is the Producing Artistic Director and Co-Founder of 1812 Productions. For 1812 she has created over a dozen original works of theatre, including To The Moon, This Is The Week That Is, Always a Lady, Our Show of Shows, Cherry Bomb, and It's My Party: The Women and Comedy Project.Her one-woman show Why I'm Scared of Dance by Jen Childs premiered at 1812 and has since been performed at Delaware Theatre Company, the Kohler Arts Center in Wisconsin, Act II Playhouse, and City Theatre in Pittsburgh. Favorite performances outside of 1812 include The Happiness Lecture with Bill Irwin at Philadelphia Theater Company, Spin at the Wilma Theater, Red Herring and Dex and Julie Sittin' in a Tree at the Arden Theatre Company.