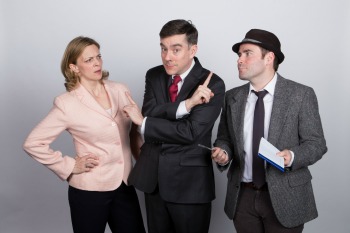 AMBLER, PA - Just in time for the 2016 election, Act II Playhouse presents the world premiere of Electile Dysfunction. Created by and starring Artistic Director Tony Braithwaite, Will Dennis, and Tracie Higgins, this original comedy cabaret about the election is on stage in Ambler from Sept. 6-Oct. 9, 2016

"I wanted to do an election show because this year, especially, it is on everyone's minds. I knew there would be deep wells of comedy to draw from," Braithwaite said. "Audiences will get to laugh at both parties, as we will be equal-opportunity offenders."

"A spotlight on this show will be placed on the presidents of the past, and what they might think of the current situation, along with advice they might have," Braithwaite said. "Bill Clinton will be singing 'Give 'em the old Razzle Dazzle' to his spouse, for example."