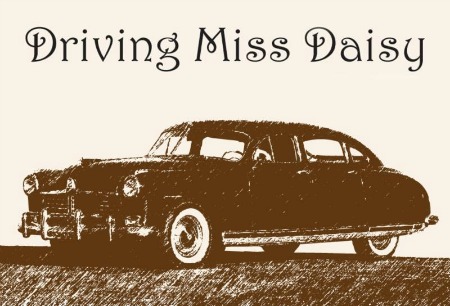 "This charming story about friendship between an old white lady and her old black chauffeur in the old Deep South is a good bet, likely to be moving and funny," Inquirer critic Tony Zinman wrote on Jan. 31.

Daisy Werthan (Belver) is a 72-year-old Jewish widow living in Atlanta. After she is in a car accident, her son Boolie (Braithwaite) hires Hoke Colburn (Wilson), an African American man, to be her chauffeur. What begins as a conflicted relationship blossoms into a friendship that spans decades.

"When I was hired as Artistic Director one of my first thoughts was exactly this: I want to do Driving Miss Daisy with Carla Belver as Daisy and Brian Anthony Wilson as Hoke. And here we are," Braithwaite said.

The play, which premiered Off-Broadway in 1987, was adapted into a major motion picture that won the Academy Award for Best Picture in 1990. "Most people remember the film but the stage version is even more intimate and charming and surprisingly funny at times," Braithwaite said. "Our audiences will relate, and will love it."

Tickets for Driving Miss Daisy are $25- $36. Discounts are available for subscribers, students, group of 10 or more, and seniors (65+). Tickets are available online at http://www.act2.org, by calling the Act II box office at (215) 654-0200, or in person at 56 E. Butler Ave. in Ambler. A complete calendar of performances can be found here.

Carla Belver (Daisy Werthan) was last seen at Act II in last season's The Glass Menagerie, for which she was nominated for a Barrymore Award for Leading Actress. She was the recipient of the Barrymore's 2014 Lifetime Achievement Award.  Recent roles include Beautiful Boy at the Walnut Street Theatre, Auctioning the Ainsleys and The Trip to Bountiful at People's Light and Theatre Company where she is a Company Member and with whom she has had a long association, and August: Osage County at the Arden where she also performed in All My Sons and Death of a Salesman. She was one of the founding members of The Philadelphia Theatre Company. Some of her favorite roles there were Sadie Thompson in Rain, Titania in Midsummer Night's Dream and Belle Starr in Jesse and the Bandit Queen. She can be seen as Mrs. Perry in the now classic film, Dead Poets Society. She taught acting for thirty years at various local colleges and theatres, including Swarthmore College and The Walnut Street Theatre.

Tony Braithwaite (Boolie Wethan) is in his fourth year as Artistic Director of Act II Playhouse, having most recently appeared here in On the Road Again and According to Goldman. Other recent work here includes Making Spirits Bright, Forbidden Broadway,and Didn't Your Father Have This Talk With You? Tony has worked in and around Philly since 1995 (as an actor, director, writer, and comic) and has also appeared at 1812 Productions, Arden Theatre Company, Philadelphia Theatre Company,The Kimmel Center, Delaware Theatre Company, Hedgerow Theatre, Montgomery Theater, and both the PA and Philadelphia Shakespeare Festivals, among others. Tony is a 13-time Barrymore Award nominee, a 4-time Barrymore M.C., and a 3-time Barrymore winner, including wins for The Big Bang and The Story of My Life (both at Act II). For 22 years, Tony has also served as Director of Dramatics at his beloved alma mater St. Joe's Prep, where he was recently presented with the school's highest honor, The Ignatian Award.