A World Premiere Musical by Michael Ogborn - THE THREE MARIES: A PHILADELPHIA PHABLE 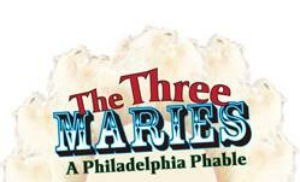 (Philadelphia, PA) No Attytude Productions announces the World Premiere of The Three Maries by composer and lyricist Michael Ogborn. It runs December 15, 2015 – January 10, 2016, on the Mainstage at the Prince Theater, 1412 Chestnut Street, Philadelphia. Peter Rios directs.

A mash-up of Cinderella and Pygmalion, The Three Maries is narrated from a Mummer’s clubhouse on Dock Street in South Philadelphia. Touted as a “Philadelphia Phable,” it is a fictional account of an historical event. The year is 1926, and Queen Marie of Romania announces a visit to the City of Philadelphia for the celebration of the sesquicentennial, changing the lives of one South Philadelphia family forever.

Composer and lyricist Michael Ogborn, a native of Roxborough, calls The Three Maries his “love letter” to the City of Philadelphia. It lovingly pokes fun at some of Philadelphia’s unique attributes – the Office of the Mayor, the Mummers, and of course, South Philly accents. The score is infused with 1920’s Jazz, Vaudeville, Tin Pan Alley and the famous sound of the Mummer’s string band.

Ogborn says, “Philadelphia is my home and a place that I adore. Most of my work is produced here and I have long-time relationships with several theatre companies in the region. That said, there are some quirks about Philadelphia that I find both funny and endearing. This shows calls them out. I think Philadelphia audiences of all ages and from all neighborhoods will have a great time laughing at themselves and with each other when they see this show.”

Producers Monica Horan Rosenthal, Philip Rosenthal and Julianna Schauerman are old friends and, along with Ogborn, are co-Producers of The Three Maries. Rosenthal is best known for being Creator/Executive Producer of the hit TV series Everybody Loves Raymond. Horan Rosenthal, his wife, portrayed the character of Amy MacDougal on the show. They are both currently producing the revival of Spring Awakening on Broadway. Schauerman produced Ogborn’s Baby Case at New York Musical Theatre Festival in 2012, for which it won four awards including “Best of Festival.” She also produced Ogborn’s Hootenanny Hoedown in Delaware County in 2011. No Attytude Productions was created for the sole purpose of producing The Three Maries in Philadelphia.

Schauerman says, “One night, Michael told us he had a show about Philadelphia and started doing his Philadelphia accents and quoting lyrics like ‘a coke and hoagie to go.’ It was hysterical. Monica and I took a trip to New York to see Michael and hear the rest of the score. We left knowing we needed to produce it for Philadelphia audiences to enjoy and take into their hearts.”

Horan Rosenthal adds, “Michael has written a show that residents of and visitors to Philadelphia won’t want to miss. Like Shear Madness in Boston or MENOPAUSE The Musical, audience members will be humming theses tunes and laughing over these charming characters long after they’ve left the theatre or the city…and they’ll want to see it again and again.”

The Three Maries begins previews on Tuesday, December 15 at 7:30pm, opens to the press on Thursday, December 17, 2015, and runs through Sunday, January 10, 2016 at 2:30pm. Find tickets and a full schedule of performance dates and times at http://princetheater.org/events/three-maries and at www.thethreemaries.com.