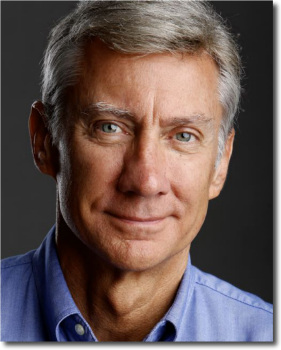 The Tale of the Allergist’s Wife is the latest production at Bucks County Playhouse. The play tells the story of Marjorie Taub who lives on the upper west side of New York with her husband, Ira. Marjorie spends her time pursuing culture at lectures, museums and theatres. She is facing an epic mid-life crisis when a friend from her past visits her. Charles Busch wrote this play and it is directed by Boyd Gaines. The Tale of the Allergist’s Wife stars Marsha Mason, David Garrison, Marilu Henner, Ryan Shams and Emily Jon Mitchell.

David Garrison is best known for his role on Married with Children as Steve Rhoades. He also has had a very successful career on stage playing roles such as Serge B. Samovar in A Day in Hollywood/A Night in the Ukraine, J. Bruce Ismay in Titanic and the Wizard in Wicked. We had a chance to talk to Garrison about his role in The Tale of the Allergist’s Wife and his acting career. Garrison is charming, humorous and passionate about his career, and talked to us about his character in this play as well as some of his favorite roles.

Kelli Curtin: Tell me about the show, The Tale of the Allergist’s Wife.

David Garrison: The show was originally on Broadway in 2000, and is a play by Charles Busch. The original cast starred Linda Lavin and Tony Roberts. The funny thing about being in this show is that I did the first reading of the play at the Manhattan Club. I read opposite Linda Lavin, and completely forgot about it. For me, the show has come full circle because I am playing the same part, Ira, which I read years ago. It is great being back in Charles’s sandbox again.

Kelli Curtin: Can you tell me about your character?

David Garrison: Ira is an allergist. He is a loving husband, although he suffers from narcissistic tendencies. His life centers around a notion of good deeds and spreading his expertise. He is a good guy.

Kelli Curtin: You have done various roles on television and stage, how did you prepare yourself for your role in The Tale of the Allergist’s Wife?

David Garrison:  To prepare I look at the music and rhythms of the language. Charles [Busch] writes rhythmically. In Charles’s world, things are a heightened realism as evident in his writing. I prepare to enter his world and hear the music of language.

Kelli Curtin: Why do you think live theatre is important?

David Garrison:  In this digital age where we are vulcanized socially and politically, there are few places we can come together and share experiences. Theatre is a cleansing experience where people can laugh and cry together – this is incredibly important. What happens in theatre is we discover how much more alike than different we are.

Kelli Curtin: What roles that you have played have been the most challenging? The most rewarding?

David Garrison:  One of the most challenging roles I have played is Serge B. Samovar in A Day in Hollywood/A Night in the Ukraine. It is hard to replicate a famous person. I try not to imitate the person, but I try to discover that person’s way of thinking. There is a difference between imitation and conjuring. In Silence! The Musical, I played the iconic figure of Hannibal Lecter. I had to get past imitating [Anthony] Hopkins and try to conjure him.

The most rewarding roles are the ones in which I play the bad guy. I played the devil in Randy Newman’s FAUST. It was an extraordinary show, and I am sorry it never went to New York City. I have fun playing the bad guys.

David Garrison:  It has to be whatever is happening right now because if it is not then I become like Miss Havisham living in the past. Today, 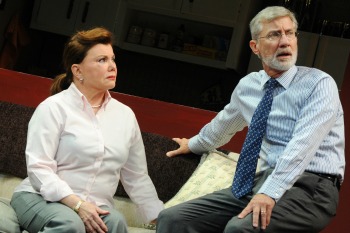 Marsha Mason gave me a present of the perfect ingredients for the perfect manhattan. In this moment, that is my favorite experience as an actor.

The Tale of the Allergist’s Wife is at Bucks County Playhouse through September 1, 2013. For more information and tickets visit their website at www.bcptheater.org or call their box office at 215-862-2121.

Originally appeared on the Broadway World Philadelphia website on August 20, 2013.