Behind the Scenes: Terry Nolen of the Arden Theatre Company Talks About the Master Storyteller Award and Stephen Sondheim 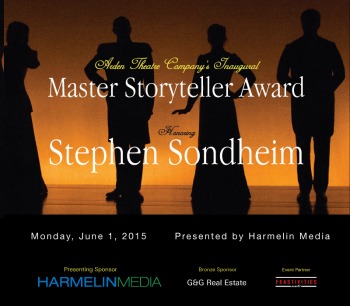 On June 1, 2015 the Arden Theatre Company will present their inaugural Master Storyteller Award to Stephen Sondheim. This will be an ongoing award and the Master Storyteller Award Committee will select a recipient of this award every other year. The Arden’s mission is to present the work of great stories by great storytellers, and according to Artistic Director Terrence J. Nolen, “We have presented more Sondheim productions —13 in our 27 year history — than any other artist. I can think of no one more appropriate to receive this award than Mr. Stephen Sondheim."

I had the opportunity to speak with Terry Nolen about the Master Storyteller Award and what it means not only to the Arden Theatre Company, but also to the Philadelphia Arts Community. We also had a chance to talk about the importance of Sondheim and Nolen’s goals for the future of the Arden.

Kelli Curtin: Tell me about the Master Storyteller Award? How did this award come about?

There is a selection committee that discussed who the first recipient of this award would be. Immediately, Sondheim came to mind, and everyone agreed that he would be an amazing inaugural recipient. It is meaningful for us that Sondheim is the first recipient. As the Master Storyteller Award continues, our criteria are a storyteller in any medium, not just theatre.

Kelli Curtin: Why is this award important not only for the Arden, but for the Philadelphia Arts community?

Terry Nolen: We have done several Sondheim shows at the Arden over the years – we did Sweeney Todd twice, Sunday in the Park with George twice, A Little Night Music twice, Company, Merrily We Roll Along, Into the Woods, A Funny Thing Happened on the Way to the Forum, Assassins, Pacific Overtures, and in 2008 we did Candide which Sondheim wrote additional lyrics. In addition, this year we are doing Passion. Sondheim is the most produced writer in the Arden’s history. We return to his work over and over because he challenges us as artists and as a community; his work is famously demanding and incredibly rewarding. As an audience, people value and have an ongoing relationship to Sondheim’s work, and as artists we value and have an ongoing relationship with his work as well.

Sondheim’s works bring forth some incredible talent that we value to work with at the Arden. For example, Ben Dibble’s first production at the Arden was as Jack in Into the Woods. He has since been in several productions over the years, including several Sondheim works such as Assassins, Candide, A Little Night Music and he will be in Passion. This ongoing relationship with Sondheim makes artists better, and makes them top of their game. This also carries on to someone like Jorge Cousineau, who has done video and sound design in all of the Sondheim shows since Assassins.

As artists, when we do a person’s work over and over we understand their point of view. When we are inside one of Sondheim’s pieces it makes more sense as we approach another one of his works.

Sondheim has been called “our modern Shakespeare.” Through his language he depicts humanity onstage and what is means to be human. Sondheim’s works are complex, and he really has the gift to portray humanity in his pieces. I seem to find myself in his work, and the beauty of Sondheim is that I feel alive working on his shows and watching it come together.

Kelli Curtin: Do you have a favorite Sondheim show/character?

Terry Nolen:  My favorite show is usually the current show I am working on. Right now, it is Passion. There is nothing better than being in a rehearsal room for a Sondheim show with the music and getting lost in that world.

My first experience with Sondheim’s work was with Sweeney Todd. This show rocked my world and opened my eyes to what musical theatre can do. In act two of Sweeney Todd there is the “Joanna reprise” where Anthony is looking for Johanna and Sweeney is singing to his lost daughter as he is slitting the throats of customers. It is a remarkable and haunting sequence. This song brings together so many characters in one sequence, that is spectacular.

Kelli Curtin: You and the Arden are very well respected. What has been the key to your success?

Terry Nolen: In 1988, we made a commitment to use Philadelphia based actors, and at that time that was not the case in Philadelphia, New York actors were used. We started to use Philadelphia based artist such as actors, designers and writers. We are success driven to attract really amazing people – staff, artists, board members, audiences. At the Arden we have a very loyal audience that supports what we do. We are always expanding our pool of artists. We have worked continuously with people like Matther Decker who is the Associate Artistic Director, whose first show as Assistant Director was A Prayer for Owen Meany. We also have worked continuously with people like Jeffrey Coon, Ben Dibble, Mary Martello and Michael Hollinger and in addition, we expand our pool of artists. For example, Alex Keiper whose first show here was in The Flea and the Professor in 2011, and since then he has continued to perform in shows here as well as all over the city. We continue to develop relationships with Philadelphia based artists.

Kelli Curtin: What is your goal for the future of the Arden?

Terry Nolen: We want to continue to be an artistic home for Philly artists and create new works. We also want to continue developing new musical/play initiatives. We have done forty plays/musicals, but only a handful considered “new.” We really would like to continue to develop new plays and musicals at the Arden.

We also would like to grow the work we do with kids and students through theatre education. We have programs like Teen Arden for High School kids, and this program brings together kids who are obsessed with theatre.  Also, as part of Teen Arden we do a Cabaret of Duets, which pairs professional performers such as Alex Keiper, Jeff Coon and Robi Hagar, with members of Teen Arden. It is an amazing experience for all involved. We really want to keep growing the education work we do in order to keep developing a strong Arts community.

Terry Nolen: An amazing thing happens in the event of live theatre that is remarkable, and that is a group of audience members start breathing together, and become lost in the story they are seeing in front of them. At the beginning of Macbeth, the audience (which consists of people of all ages) is grabbed by the excitement they first see with witches, a storm, an amazing battle, and after the excitement of all that they meet Macbeth. People of all ages and cultures come together in one place and they all are wrapped up in the story. There is nothing like this experience.

The same thing happens in our kids shows. So many kids are being exposed to live theatre through our children’s productions. Through live theatre kids remember the story and what they have seen – like in our production of The Jungle Book, Mowgli is alone in the woods until the mother wolf “stands up” to protect him. Kids will remember seeing things like this live onstage.

I am drawn to great stories, and seeing great stories told through the medium of live theatre and being in a room with an audience that is enthralled with what is happening onstage - there is nothing like it. That is live theatre at its best.