Veronica’s Room is currently onstage at the Tell Studio Theatre at the Fulton Theatre. This theatre, upstairs at the Fulton, is the perfect space for this psychological thriller. Veronica’s Room is written by Ira Levin, who is known as the author of Rosemary’s Baby and Deathtrap. Although not much can be said about the plot of this play without giving the story away, it is a show full of mystery, twists and turns that will have audiences guessing to the very end.

I had the pleasure of speaking with Havilah Brewster and Susan Cella who are in Veronica’s Room. They both spoke to me about the play and what audiences can expect from this show. In addition, they both talked about what it is like working in such an intimate space as well as what they enjoyed about being in a play described as a psychological thriller.

Kelli Curtin: Could you tell me a little about the show?

Havilah Brewster:  The show is about a young woman who is invited by a kindly Irish couple to come to their home where they are the keepers 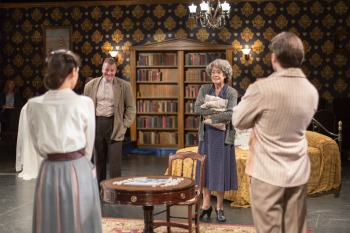 of the grounds and the house. She and her beau at the time are invited to this house because she bears a striking resemblance to one of the family members who used to live in the house. The Irish couple invite this young woman into their home to look at a photo of a woman, Veronica, and as this young woman and the audience enters Veronica’s room they discover her room has been kept intact since her death. Some of the things kept intact are an unfinished puzzle and an unfinished painting. This couple has kept everything as it was and they are asking this young woman, Susan, to pretend to be Veronica for a little bit for the benefit of the one remaining family member of the owners of the house, Cissy, Veronica’s sister. The couple explains to Susan that Cissy is dying and experiencing some delusions, and believes Veronica to still be alive. So they are asking this young woman to be Veronica for a little while for Cissy’s benefit. This is about all I can say about the show before I begin to give the mysteriousness of it away.

Kelli: What can audiences expect when coming to see the show?

Susan Cella: They can expect twists and turns as well as mind games. They can expect to have the feeling as if they are actually locked in Veronica’s room with the storytellers. The studio is a very intimate space, and it is in the round, so we the actors are literally inches from the audience. People coming to see the show can expect to be part of the experience.

Kelli: What were your first impressions when you initially read the script?

Havilah: My very first impression was I have to read this script again. I really thought the story is just super creepy. I found the ending really jarring, and truly a surprise to me. However, I also loved the artful way the playwright left me with the feeling that I wanted to read the script again. When I first read it I thought I knew what happened, but I really was thrown by the end, and left with the impression that I had no idea what was going to happen next.

Susan: When I read the play I thought, as an actress, this is such a great part. The playwright created such a fantastic world with this play. Then I got to the end of the play and I thought, what just happened? It is one of those shows you really do not know where it is taking you. Structurally I do not love the end of the play, but I do admire Ira Levin for this play as well as some of his other shows like Deathtrap. I am a stickler for tracking details in a show or even in movies, and with Levin’s works you cannot find any loopholes in terms of facts or the mystery unfolding.

Kelli: What do you enjoy about being in a show that is a psychological thriller?

Havilah: I have to say, in general, I love watching psychological thrillers whether movies or live theatre. I love seeing it, so in turn I love performing in one. I love feeling like I am performing in a show that has people questioning what is going on. Marc [Robin] is also a big fan of psychological thrillers, so it has been really fun to trade stories with him about those type of movies and what moments in those movies we love.

Susan: I really like finding the teeny moments we drop a little glimmer of a mystery. For example, having people question things like are we who we say we are in the show, or is there more to this character than what we are seeing. In the first act, we are a lovely Irish couple, and Michael [Iannucci] and I play it truthfully to being this Irish couple. However, each time Michal and I play this, we find small moments with looks or little jarring responses that are there to manipulate the audience, and plant teeny seeds in their minds about what is about to come. We have to do this very judiciously because we cannot give too much away too soon.

Kelli: How did you prepare for your role?

Havilah: Most of my work I did on this role was done once we started rehearsals. For me, the time period was a big factor for me. It really helped me lock into this character, I found this informative as to preparing to play her. It helped me find what she is excited about and why she decided to go to the house to help this couple.

The role I am playing is an average woman who is not complicated and who is put into extraordinary circumstances. Part of my process was realizing that the role of this character is to listen and react.

Susan: Without giving too much of this story away, I really had to figure out who the woman I play is. I had to work out who she is, and look at the voice and truth to this person. I drove Marc and the rest of the cast crazy asking thousands of questions throughout the rehearsal process. I really have enjoyed the rehearsal process, it has been a great collaboration.

Kelli: What do you enjoy about working in the Tell Studio Theatre at the Fulton?

Susan: It really makes me, as an actor, go back to my craft and work truthfully and honestly. When you work in larger spaces, you have to work to hit the back row. In a smaller space, like the studio, you work differently because your focus and energy is more on the art and less about worrying about making sure you hit the back of the theatre. In a smaller space you make your acting more honest and truthful, you are less about acting and more about being that character you are portraying. This is always at the core of any show, but in a smaller space we really have to amplify because of the space.

It can be a challenge to work in a space this small because we are so close to the audience, so we can see everything they do. We can see and hear everything, and we hear them talk to each other about things they are seeing in this show. And, as fun as it is to acknowledge that people are really mystified at what they are seeing in Veronica’s Room, it can be challenging to not be distracted and have these moments take us out of character or out of Veronica’s room. Working in this space has been a very good exercise for us all in concentration because on a larger stage in a larger space you do not have as much distraction.

Susan: Live theatre is crucially important for audiences to understand that we are live, we do not have a safety net – we could make mistakes, a set could come crashing in, we could forget our lines, and if it is a musical we could crack on a note. I am not saying we should hope for those things, but theatre is live, it is human. Theatre is not television, CGI or film, it is an ancient art form and hopefully it will continue. This is one of the reasons I was so ecstatic about Hamilton, Lin-Manuel Miranda is our hope for the future of musical theatre. He came up with a whole new way to do an old Art form, which is so thrilling, so contemporary, so identifiable, and so moving. There is nothing like seeing a live performance, there is no comparison. Live theatre is real people taking crazy chances in front of you.

Susan Cella and Havilah Brewster can be seen in Veronica’s Room at the Fulton Theatre through October 30, 2016. For more information and tickets visit their website at www.thefulton.org or call the box office at 717-397-7425.

I loved EVERYTHING about this production. Definitely will always remember this story.