Behind the Scenes: Sean Thompson Talks about Media Theatre’s GHOST and His Favorite Moments in the Show 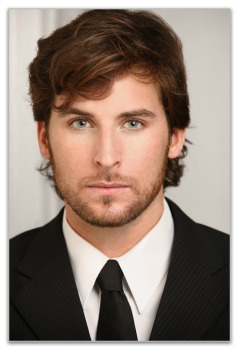 The musical, Ghost, opens on March 6, 2015 at the Media Theatre in Media, Pennsylvania. This show is based on the iconic 1990 movie and centers on the love story between Sam and Molly. I had a chance to speak with Sean Thompson who plays Carl, the best friend of Sam and Molly. Thompson spoke with me about the musical version of the story and how it compares to the movie. He also described his character, Carl, and the universality of this story.

Kelli Curtin: Could you tell me about Ghost?

Sean Thompson: It is an adaptation of the 1990 movie. Bruce Joel Rubin who wrote the screenplay of the movie also wrote the book and lyrics for the musical. He stayed faithful to the original screenplay. Ghost is about two people, Molly and Sam, living in New York City who are in love and have it all. There is an operatic turn of events, and one person is killed and the other person is left to deal with it. Their best friend caused the murder, and now Molly is in danger.

Kelli Curtin: What can audiences expect from the show?

Sean Thompson: Ghost is a beautiful love story. It also has very fun music that is reminiscent of 80s/90s pop. Dave Stewart and Glen Ballard wrote the music and lyrics for this show. Stewart was part of the musical duo, Eurythmics. Ballard is best known for co-writing and producing Alanis Morissette's Jagged Little Pill and co-writing Michael Jackson’s song, “Man in the Mirror.” This show definitely has a 90s feel to it with the music, but also with little references; like Sam carries with him address book and access codes to work accounts. In today’s society, we would just store that information in our phones.

Kelli Curtin: Tell me a little about your character, Carl.

Sean Thompson: I am still exploring him. However, he is the typical third wheel – he is best friends with Sam, who has a really cool girlfriend who he also has become close friends with. Carl is a single guy who hangs onto the relationships he has. He is on the lower rung of the corporate ladder and is resentful of this especially since his best friend, Sam, is his boss and Carl is older than Sam. In addition, Carl is materialistic, which is apparent in his song “More.” He is fixated on things like Lamborghinis and nice New York apartments. Molly refers to him in the show as a snob.

Kelli Curtin: Would you consider Carl a villain?

Sean Thompson: I would not call him a villain; I think he is misguided. He has an idea that will allow him to quickly make cash without hurting anyone. The people Carl deals with in this scheme are much more powerful than he is and then the plan goes awry and someone gets killed. Carl then has to deal with the thing he has done. Carl never sets out to hurt anyone; his only mal-intention is to make money illegally.

Kelli Curtin: How does the musical version of Ghost compare to the 1990 movie?

Sean Thompson: There are moments in this show that perfectly capture the spirit of the movie. For example, there is a scene in the movie where Demi Moore [who plays Molly in the movie] is grieving and sits at the top of a staircase, and she pushes a jar down the staircase and it shatters. The song in the musical, “With You,” is perfectly adapted from this moment and audiences will see this intensity onstage.

In regards to the music, there is a theme to the musical that is operatic and huge, and it sounds emotional. This theme is used in the overture and finale, and it is very emotional, which really captures the essence of the movie.

Kelli Curtin: Why do you think this story is still popular?

Sean Thompson: There is universality to this story. Everyone at one time or another has been in love. Also, the theme of loss is also universal, we have all lost someone or something we cannot get back. In addition, there is the recurring question in the show, “What if I could?” As a society, there is an obsession with the afterlife or the unknown. In the story of Ghost it touches on the question “What happens after you die?” A show that addresses the afterlife or the unknown is engrossing and offers something to believe in on a nebulous topic.

Kelli Curtin: Do you have a favorite scene or song in Ghost?

Sean Thompson: The act one finale is really cool. There are six or seven scenes encapsulated in one song, “Suspend My Disbelief"/"I Had a Life." It is a song performed by Sam, Molly and Carl where we get to belt our faces off. This is also the moment where the audience sees the turn in Carl, it is the “aha” moment. It is a cool moment in the show.

Kelli Curtin: Did you always want to be an actor? What was your first show?

Sean Thompson: I think so. As a kid I was always running around trying to get a reaction. I did a production of Grease in my garage when I was nine years old and I also played Saint Joseph in the Christmas pageant at some point. In the 7th grade, I also adapted Roald Dahl’s short story The Land Lady into a play for the PTA. So yes, I always wanted to entertain. This eventually led me to do a double major at Temple in English and Literature.

Kelli Curtin: Why do you believe live theatre is important?

Sean Thompson: Live theatre allows us to experience human connection. It is important to experience connection to other people because this teaches us about ourselves. People come see live theatre in order to be entertained and through the beauty of live theatre people leave the theatre knowing themselves just a little bit more.

It was a pleasure to have the chance to talk with Sean. He can be seen in Ghost at the Media Theatre in Media, Pennsylvania from March 4 – 29, 2015. For more information and tickets visit the theatre’s website at www.mediatheatre.org or call the box office at 610-891-0100.