Behind the Scenes: Philip Michael Baskerville Talks about MEMPHIS at Walnut Street Theatre and the Importance of the Show 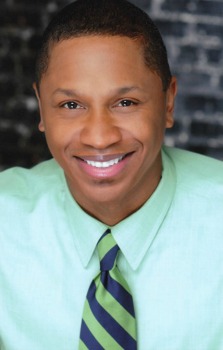 The Walnut Street Theatre closes their 2014/15 season with the musical, Memphis. This musical is loosely based on Memphis DJ, Dewey Phillips, who was one of the first white DJs to play Rhythm & Blues on a radio station with a predominately white listening audience in the 1950s. The story of Memphis moves between underground Rhythm and Blues dance clubs and a determined white DJ who makes it his mission to play the music that “grabbed him by the heart and broke down all his senses.”

I had the chance to speak with Philip Michael Baskerville who plays Delray, the owner of an underground dance club, and the protective brother of one of the other main characters, Felicia. There are social and cultural changes occurring in the 1950s, and Delray tries to do everything in his power to keep his sister safe. Baskerville spoke to me about the show and playing the complex character of Delray. In addition, we discussed the role the Arts and music played in his life while growing up.

Kelli Curtin: Could you tell me a little about Memphis?

Philip Michael Baskerville: Memphis is a musical by Joe DiPetro and David Bryan. The show takes place in the 1950s in Memphis, and is loosely based on the story of disc jockey, Dewey Phillips. I play Delray Farrell who is the owner of a juke joint. This white gentleman, Huey, likes to listen to black music and the only place he can hear that music is in an “underground club.” Huey walks into Delray’s club and their paths cross, and Huey calls the music the “music of my soul.” Delray has great concerns that are revealed throughout the course of the show, but one of his responsibilities is protecting his sister, Felicia.

Memphis depicts the environment of the South in the 1950s. In regards to my character, Delray, the show is well crafted in that it shows how Delray has his own issues about what is happening in the South, which is revealed much later in the show. Delray is very protective of his sister and he wanted her to have a future, and he knows her future cannot be with Huey. The changing cultural and social environment of the 1950s is depicted in this show.

Kelli Curtin: What can audiences expect from this show?

Philip Michael Baskerville: They can expect a show that touches on the historic issues of the 1950s, but they can also expect a show with really great music. The music in this show ranges from rock & roll, gospel, jazz and blues. Memphis shows how influential music was in the 5 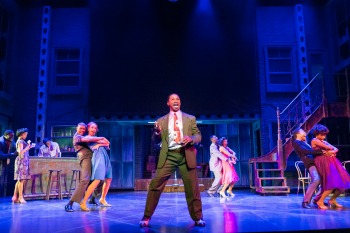 0s and it is a poignant story with history. The show is a fun-filled evening with great music and a great story. This show addresses a serious subject regarding attitudes about race in the 50s, and audiences will laugh, cry and hopefully take away something from the show. It is a show everyone will identify with because everyone identifies with having dreams, and sometimes having those dreams shatter.

Philip Michael Baskerville: Delray is a misunderstood and complex character. His layers are revealed throughout the show, and he is an example of how his environment shaped who he is. He has a fear of the unknown. Delray is taught by experience, and when Huey comes into the club, Delray does not know what to expect. Initially, Delray has a visceral reaction to Huey, but eventually he grows to tolerate Huey.

Delray truly fears for his sister’s future and safety. There are times Delray is angry and concerned, but underneath all his layers, he wants what is best for his sister. Delray’s sister, Felicia, is the single most precious thing to him and he wants to protect her.

I really love Delray, because he has depth. As an actor, playing this type of character can be challenging for many reasons. As an actor, I have to direct this character’s complexity. I really want the audience to understand him and be empathetic towards him at times, and see his humanity. It is challenging to make sure this character does not come across as one note – he is passionate, loves his sister and he is willing to do anything for her and to protect her. 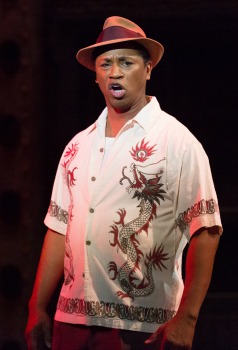 Kelli Curtin: This show really captures the essence of the 1950s with the music and the social and cultural changes happening at that time. Why do you think this show is important?

Philip Michael Baskerville: In 2015, there is a lot going on in the society we live in today. There are times we still need to pinch ourselves because the issues we have in society today are similar to those of the 1950s. This show helps open a dialogue, which is something we need. People can learn from this show. The story in Memphis is still relative and the show holds life lessons and America history lessons. If we watch and listen, we can learn from experience and become better and more informed people. This show also demonstrates that music is a universal language and the music in this show should move people to laugh, cry and dance. Music is for everyone and it does not belong to any one person or group.

Philip Michael Baskerville: My parents are great supporters of the Arts and they, as well as my grandparents, exposed me to plays, opera and ballet. I was fortunate to be close to New York City, and we went to the City often for dinner, to shows and to see plays. When I was younger, I was captivated by Mikhail Baryshnikov, I thought he was the best thing since water.

In addition, there was always music in our household. Our house was very musical. I am influenced by Dinah Washington, Louis Armstring, Nat King Cole, Whitney Houston, the Beatles, Jackson 5, and the late Teena Marie. My parents introduced me to classical music such as Mario Lanza and Pavarotti. I have been immersed in music for as long as I can remember. It allowed me to learn. I saw everything I could from music to film to comedy to Sondheim shows. I was able to learn from it and watch a wide array of performers, and see how their styles differed. My exposure to music and the Arts helped create an interest for me to want to be an actor.

Kelli Curtin: Do you have a favorite role you have played? Is there a role you are hoping to play? 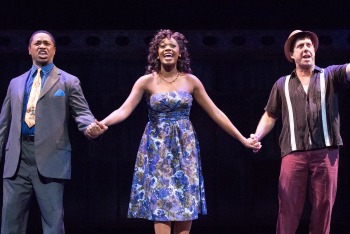 Philip Michael Baskerville: I have so many. I loved playing John in Miss Saigon and the Hawker from The Who’s Tommy. Also, I loved being in Sweeney Todd and Ragtime. I also love doing musical comedies such as The Producers.

I would love to play Jim Conley in Parade and a role in Dessa Rose. I love Ahrens and Flaherty.

Philip Michael Baskerville: First, live theatre is a valuable learning tool for the audience and the actor. Also, it is a journey from beginning to end. Theatre is live, and it is not taped, so audiences see everything. Lastly, as an actor you hear the reaction from the audience and that is fulfilling. It is satisfying to know that the audience is with you on your journey in storytelling and you can hear them react, and as an actor, you know they are completely understanding your character. It is meaningful and emotional for me to know that I have taken the audience on a journey and they are as invested in the show as I am.

Philip Michael Baskerville can be seen in Memphis at the Walnut Street Theatre through July 12, 2015. For more information and tickets visit their website at www.walnutstreettheatre.org or call the box office at 215-574-3550 or 800-982-2787.

Great article! We would love to see Philip in an upcoming show.. Philip - contact us - Audrey, Amy and Shana miss you.