Behind the Scenes: Michael Whistler Talks About the Inspiration Behind MICKLE STREET 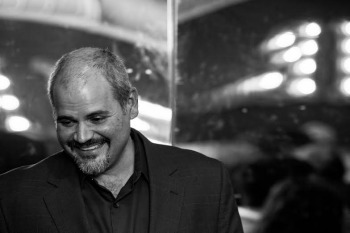 The Walnut Street Theatre’s Independence Studio on 3’s latest production is the world premiere of Mickle Street. This play is about a meeting in 1882 between two great writers, Walt Whitman and Oscar Wilde, and how these two men discover a common sense of beauty. I had the privilege to speak with Michael Whistler, the playwright of this play. Whistler spoke with me about how he became interested in this meeting between Whitman and Wilde as well as some of the challenges of writing about two iconic literary figures.

Kelli Curtin: Could you tell me about the play, Mickle Street?

Michael Whistler: In 1882 Oscar Wilde toured the United States and while he was visiting in Philadelphia he approached Walt Whitman to meet. Wilde went to visit Whitman in Camden, and this afternoon meeting is the basis for the play.

I found out about this meeting between these two great writers when I read a biography on Wilde. This meeting to me was such a great meeting of two great minds. I was curious about what these two men would talk about with each other. These men are so different, Whitman is a transcendentalist and they both have such different attitudes on the power of beauty. The thing that I find so interesting about this meeting between Whitman and Wilde is that they are both in such different points in their career. Wilde is 28 and hungry for a reputation as a writer and Whitman is 63, retired and is published.

Kelli Curtin: Where did you find inspiration for this play, and is there a meaning to the title?

Michael Whistler: I come from a background of literature. My degree is in English Literature and my Masters in in Theatre. I loved writers first, 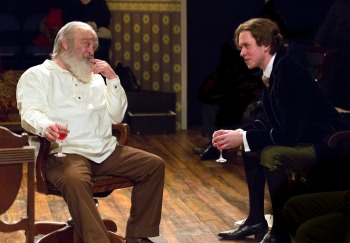 and literature has always been part of my world.

I found the inspiration of these two characters from reading the poetry of Whitman such as Leaves of Grass and writings of Wilde to get a sense of who they were as people. I also read letters written by these two men. I examined the question who is young Oscar Wilde? I read his early writings as well and at this point in 1882 Wilde was not published. I also wanted to look at how this meeting between these two men changed Wilde.

Kelli Curtin: What are the challenges of writing about two well-known literary figures? Would you consider this work a historical play?

Michael Whistler: When I started to write this play I needed to step away and stop being in awe of these two men, and look at it from the aspect of one man speaking to another man. I also had to find out about the young Oscar Wilde and who he was, in 1882 he was in love with a dandified version of himself.

I spent a lot of time researching this meeting and trying to find out what is known about this meeting between Wilde and Whitman. My primary goal with this play is to use this specific moment in history to look at these two fascinating men and what could possibly have happened in this meeting.

Kelli Curtin: Did you always have an interest in literature?

Michael Whistler: Yes, always. I have been thinking about this a lot recently. I think my love of literature began when I was 8 years old. My father’s family is Canadian, from the Niagara Falls area, and I had an uncle who was in his 80s and would wander in and out of consciousness. At some point, I was in the same room with my uncle and he recited Robert Browning’s “The Pied Piper of Hamelin.” I thought this was amazing that the words of this poem stayed with him. This moment gave me a lifelong love of Browning and literature. It inspired me to look at poetry beyond the words and into the heart of the poem. There is such an interconnectedness in poetry. In good poetry, there is almost a prayerfulness in the writing.

Kelli Curtin: Is there something that you hope audiences will take away from this play?

Michael Whistler: I really hope the audience sees how this conversation with Whitman changes Wilde. There is a real joy and beauty in understanding these men. I am so proud of and excited about this play.

Michael Whistler: Honestly, Tennessee Williams. He was the playwright who made me excited about theatre and poetry and how these two things work together simultaneously.

Kelli Curtin: What advice do you have for people who want to be a playwright?

Michael Whistler: Be curious about people. People are your pen.

Michael Whistler: When we go to a live theatre piece, we are watching something fictional, but also something that is very real. It is the real and unreal simultaneously. I always tell my students to think critically about the world, to look at the huge issues and conflicts. Live theatre is a safe environment and it is a way to better understand ourselves as well as a way to understand humanity.

It was a pleasure to speak with Michael Whistler whose play, Mickle Street, can be seen at the Walnut Street Theatre’s Independence Studio on 3 until March 8, 2015. For more information and tickets visit their website at http://www.walnutstreettheatre.org or call the box office at 215-574-3550.