Behind the Scenes: Michael Learned and Daniel Davis Talk about Love Letters at Delaware Theatre Company and the Art of Letter Writing 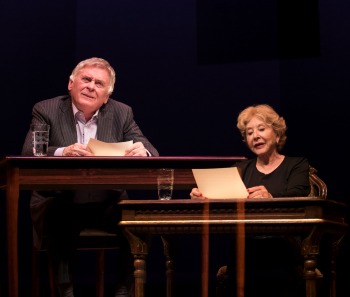 Delaware Theatre Company (DTC) opens its 36th season with the A.R. Gurney play, Love Letters. This play uses the epistolary form, where two actors read letters onstage. The play is normally performed by two well-known actors and this has contributed to its popularity. Currently at DTC the two actors in this production are Michael Learned, known for her role as Oliva Walton on The Waltons and Daniel Davis, most recognized for his role a Niles in The Nanny. Both these fine actors also have an exceptional stage career, but this is the first time they are appearing onstage together. I had a chance to speak with both Learned and Davis about Love Letters as well as about their careers.

Kelli Curtin: Could you tell me a little about Love Letters? What can audiences expect from the show?

Michael Learned: The show is a love story. It starts when the characters of the show, Melissa and Andy, are in grade school and goes through different stages of their lives. Andy is charming, conservative and a respectable human being. Melissa deals with childhood problems that affect her life, and she is an artist. Love Letters is a jewel of a play, and every time I perform in this play I find it such and interesting piece.

Daniel Davis: Audiences will recognize something in Love Letters that they experienced in their own lives. If it is an older audience the show will take them back to their youth, and if a younger crowd it will take them to the future. The show is about friendship and love, and it has humor and pathos that will make audiences laugh as well as move them emotionally.

Kelli Curtin: Could you tell me about your character?

Michael Learned: I play Melissa. She is outrageous and a rebel, like many of us were who grew up in the rigid time of the 1950s. She wants to break free of the rigidity of her childhood, but somehow she loses herself. Andy is her rock. She is a character that many people can relate to and many people can understand their friendship.

Daniel Davis: I play Andrew Makepeace Ladd III. He comes from a privileged family. He is much more comfortable communicating through letters than direct contact with people. He is highly well bred, and from an aristocratic and strict family. He comes from a family that does things properly.

Melissa is a free and rebelling spirit, and Andy lives through her. She explains to Andy the danger he is lacking in his life. For Andy, everything is perfect on the outside, but underneath there are problems. He is a PC kind of man, but is longing for something more.

I have known Michael [Learned] since the 70s. This is the first time we are working together though. The chemistry between us is great. This show is exhausting because we cannot have any eye contact or react through body movement. We are confined to chairs, so I find it hard not to be able to react physically. By the end of the show I am exhausted.

Kelli Curtin: Why do you think Love Letters is still popular since its premiere in 1988?

Michael Learned: This is a show that people from all walks of life can relate to. This show is really a love story that starts out with two kids, and the story grows.

Daniel Davis: It is a timeless play. Nothing that is ever addressed in the play is dated and goes away. The show is about the fundamental way we live our lives. The show starts when the characters are in second grade, and goes to when they are in their late 50s. Everything that happens in this play can happen at any time. Love Letters is also a good story. Everyone loves a good story, it is part of who we are as humans. We all liked stories told around the campfire as children or stories read to us at bedtime, and as adults we all like a good novel.

Kelli Curtin: In this world of technology, do you think we have lost the depth of emotion that letters convey?

Michael Learned: We now live in a world of contained personality. There are things that come out when a person sits down to write a letter. In letter writing there is an expression that come out; when things are written down it allows feelings or passions that we never knew we had to come out. My character, Melissa would have loved texting; however, Andy loves writing.

Daniel Davis: My initial answer is yes. Sadly, I am just as guilty that I find myself responding to people through texts or emails. Although, like my character, I do own a fountain pen, but I cannot find ink to buy for it. Letter writing is a lost art, and I am lucky that I do have fans who write me fan mail. I work in a profession that I express myself through language; language is my trade. I am sad we do not write letters anymore, I miss the part of our culture that we expressed ourselves through writing letters.

Kelli Curtin: You have a very successful career. Is there anyone or anything you attribute your success to?

Michael Learned: My parents were “Bohemian Wasps.” They loved music and theatre and introduced me to that culture. I really wanted to be a dancer, and I was sent to boarding school in England. It was at boarding school that I unexpectedly discovered theatre. It was there that a teacher suggested acting. I have always loved the written word, especially the writings of Shakespeare and Dylan Thomas, and love to explore their writings. Now I get to act in wonderfully written shows, and get to feel the audience respond.

Daniel Davis: I am very blessed to have training early on in the 1960s when classical training was possible in this country. Now, when I teach college students, they tell me that they only spend about six weeks on Shakespeare in their theatre program. I was very lucky that I got work right away in a Shakespeare festival. I had the opportunity here to work with great actors. Throughout my career I had the opportunity to work with very talented people. I had the privilege of working with Edith Skinner as a speech and voice coach on twelve Shakespeare leading roles. In addition, my mentor, Alan Fletcher, taught me the process of working and building a character.

The thing about Shakespeare is that his plays are like the mothership to the art of performing. An actor should be familiar with these plays, so they can use the skills they use as a base. With the knowledge I have of Shakespeare, I was never handed a script that I cannot analyze. Shakespeare is a great teacher.

Kelli Curtin: Of all the roles you have played, which ones have been the most rewarding?

Michael Learned: Financially rewarding would be Olivia from The Waltons. However, in the theatre I have played many wonderful roles. A couple that come to mind are Masha in Three Sisters and being in No?l Coward’s play, Private Lives, directed by Francis Ford Coppola.  I loved these shows, and in Private Lives, part of it reflected a truth of events occurring in my own life.  I have to say that being in the theatre is like receiving a Liberal Arts education, it is such an enlightening experience to perform all the different characters I have had the privilege to do over the years.

Daniel Davis: I had the opportunity to play Hamlet in Hamlet six times in various stages of my life. The first time I played this role I was twenty-two, and the last time I played him I was forty. It was the best character for me to bring to the stage. I also played, Peer Gynt in the Ibsen play, Peer Gynt. I had the wonderful chance to play this character for the whole length of the play from the beginning when he is seventeen and ended in his seventies. I did this play in 1976-1977 in San Francisco at the Geary Theatre.

Michael Learned: Live theatre has the ability to transform a person’s life. There are times that people can see a play, that years later they are still moved by what they saw live, onstage at a theatre. As an actor, it is amazing to me that what I do makes such a difference. It is a privilege and honor to be in this profession.

Daniel Davis: For me as an actor, when I have done television, I do not get the immediate knowledge of hearing an audience respond. For example, I recently attended a Star Trek convention. I made a guest appearance as Professor Moriarty on Star Trek: The Next Generation. It was stunning to learn how many people I reached being a guest on that show. However, when I walk out onstage, I can hear people’s reaction immediately. It is fulfilling as an actor to hear those reactions.

We live in a world where there are so many different forms of media, that we are not giving theatre the attention it used to have. I can remember a time when I was at the Guthrie Theatre in Minneapolis, and people lined up in the snow to get tickets to a show. For a lot of people going to theatre was like going to church, it was something they did every week. We need to keep the experiences of live theatre alive, it is an experience like nothing else: people sit in a theatre with others, conversations are stimulated by what they see on stage – this is only something that can happen in a theatre. The theatrical experience sustains us as people, it makes us think and talk to one another about the collective experience.

Love Letters runs at the Delaware Theatre Company through October 5, 2014. For more information and tickets visit their website at www.delawaretheatre.org or call their box office at 302-594-1100.

Kelli Curtin is editor and writer for theatresensation.com. In addition, she is a contributor for the online sites broadwayworld.com and figlancaster.com, and is a freelance writer. Kelli is excited to share her passion about theatre and the arts with her readers. Kelli can be found on twitter @theatrescribe and on Facebook/theatresensation.