Behind the Scenes: Lindsey Bliven Talks About Being Mary Poppins and Her Love of the Role

Disney and Cameron Mackintosh’s Mary Poppins opens just in time for the holidays at The Walnut Street Theatre in Philadelphia. This show is about the mysterious nanny, Mary Poppins, who arrives at the Banks’ home to help care for Jane and Michael Banks. Lindsey Bliven makes her Walnut Street debut in the iconic role of Mary Poppins. Previously, Bliven played this role at the Music Theatre of Wichita and she was a member of the ensemble in the national tour.  I had a chance to speak with Bliven about how excited and grateful she is to have the opportunity to play this role again as well as how children react to her when they see her on and off stage.

Kelli Curtin: What is the experience like of playing the iconic character of Mary Poppins?

Kelli Curtin: Did you grow up watching Mary Poppins or reading the P.L. Travers books? With a character that is so iconic, how do you put your own spin on her?

Lindsey Bliven: I grew up watching the Disney movie, but it was not until I was an adult that I read the books.  The books come from a very real place in life, but they are still magical. In the Disney movie, Walt Disney was able to bring the magic out of the books and bring her to life. The stage version of Mary Poppins is more like the books and it has a well-rounded story line.

In every role I play, I always bring a part of me to the role, and I try to make each character my own. I find so much joy in playing Mary Poppins, and I find her easy to relate to. I believe in the power of family, and I have lots of experience with children, I was a nanny when I lived in New York City. When playing the role I do not want to mimic how Julie Andrews, Ashley Brown or Laura Michelle Kelly did the role, I want this to be my own interpretation. Part of my process is I try to understand who she is, and I hope audiences enjoy my interpretation.

Kelli Curtin: Do you have a favorite moment in the show?

Lindsey Bliven:  There are so many great scenes in Mary Poppins. In the musical version of Mary Poppins, Mary Poppins is stern and strict. 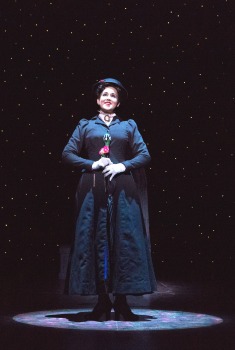 She does not show her vulnerable side until the end. In the reprise of “A Spoonful of Sugar,” she knows she is leaving the Banks family in a good place. However, in this song it is emotional for Mary because she wonders to herself wouldn’t it be great to stay with the Banks family so they could love her too. This scene is one of my favorite parts in the production.

Kelli Curtin: How do you prepare for this role?

Lindsey Bliven: I first wanted to rediscover Mary Poppins, so I read the books and watched Saving Mr. Banks. I went back over my notes I received on the national tour of Mary Poppins as well as from when I played her at the Music Theatre of Wichita. These notes helped remind me of her and her characteristics. That being said, I am different in each production of this show I do because I am growing as a person and understand her differently each time.

Kelli Curtin: Are there any characteristics of Mary Poppins that you can relate to?

Lindsey Bliven: Definitely the love of family and wanting to help people, but I can relate to her wanting to be in control too. Playing Mary Poppins for me can be a spiritual thing because I have to find out who is Mary Poppins, and in the end of the show I can relate to her vulnerability. Mary Poppins teaches us that no matter what the difficulties are in life, we have to keep going and that is something I try to do in my own personal life as well.

Kelli Curtin: You have played this role before at the Music Theatre of Wichita. When kids see you after the show how do they react to you?

Lindsey Bliven: Seeing the kids after the show is my favorite thing. The children are so sweet and they ask for autographs and pictures. They are so curious and want to know how we do things in the show, especially how I fly. I always tell them that it is theatre magic, but I love how enthusiastic they are about the show. Interacting with the kids after the show brings out the real emotion in me and reminds me how grateful I am to be able to play Mary Poppins.

Kelli Curtin: What was the first show you saw on stage that had an impact on you?

Lindsey Bliven: The first show I saw was Beauty and the Beast. I saw it in Atlanta, Georgia with my mom when I was ten years old. It was the national tour. After seeing the show, I told my mom I wanted to be in theatre. When I saw Beauty and the Beast, my eyes were opened and I was amazed and inspired by the production. I felt like I found a place where I belonged. 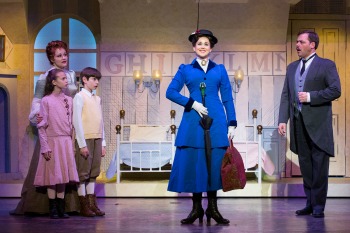 Lindsey Bliven: It varies from show to show. For this production, I have the opportunity to bring the story of Mary Poppins to a new generation of children. Some kids have seen the movie before coming to the show and some have not. One of my favorite parts about doing this show is that I get to see the children in the audience so emotionally involved in the show and going on a journey with me as Mary Poppins. People go to see live theatre because they have the opportunity to watch others express emotions on stage, so we can feel our own emotions. It is wonderful for me to know that Mary Poppins’s story is worth telling, the character is worth believing in, and that is what I get excited about.

Kelli Curtin: Why do you think taking children to see live theatre, such as Disney’s Mary Poppins, is important?

Lindsey Bliven: Taking children to see shows such as Mary Poppins impresses upon them the power of live theatre and live music. There are many different ways to tell stories, but seeing a story told live and onstage is great for attention spans and allowing young people to stay involved with the story. It is a great way to introduce kids to the Arts and allows them to have an appreciation for theatre as they grow up.

Disney’s Mary Poppins runs at the Walnut Street Theatre through January 4, 2015. For more information and tickets visit their website at www.walnutstreettheatre.org or call their box office at 215-574-3550.