Behind the Scenes: Lindsay O’Neil and Lanene Charters of Fulton Theatre’s A CHRISTMAS STORY 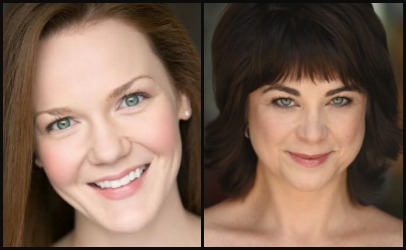 Currently onstage at the Fulton Theatre is A Christmas Story. This show is a nostalgia-inducing musical that is full of zealous performances and energetic musical numbers. What this particular production does well is reminds us that hope triumphs all obstacles while providing a healthy dose of humor and sentimentality.

I had the opportunity to speak with Lindsay O’Neil who plays Mother and Lanene Charters who portrays Miss Shields. They spoke with me about what it is like to bring this classic story to the stage and their favorite part of the show. A Christmas Story runs at the Fulton Theatre through December 31, 2017.

Kelli Curtin: The movie, A Christmas Story, is for many people a holiday favorite. What is it like brining a story like this to the stage?

Lindsay O’Neil: A Christmas Story is such an iconic film. What is so exciting about this musical is that it has kind of elevated the film in my opinion. The moments from the film that people love and enjoy – the pink bunny suit, the leg lamp, the dogs, the BB gun – all those things that are so iconic to the movie are in the musical, so they will not miss out on the scenes in the movie that people love. In addition, the musical adds these awesome production numbers such as a scene when Ralphie goes into his dreamland in which there is this great tap number that is incredible and people will love. The musical version of this story just elevates the movie for the best.

Lanene Charters: Those iconic moments that Lindsay just mentioned really do stand out. The stage version really highlights those aspects of the show, and it does it well. We can see people in the audience nudging those next to them with eagerness in anticipation of seeing their favorite part of the movie onstage. This musical is great fun for those who are familiar with the movie because they will anticipate what is coming next. Also, people are so captivated by the big production numbers.

Lindsay: With that said I do not think that you need to watch the movie or know the story behind the movie if you come because this show is a complete musical. It tells the story from beginning to end and members of the audience do not need a prior knowledge of the story.

Lanene: To be honest, I am most impressed with the nostalgic aspect of the story. Always at the end of the show I have tears in my eyes. The show really is a heartfelt family story, and it is unexpected how this show turns out to be so emotional at times. The family in A Christmas Story is an average family and everyone can relate in one way or another to the family, and in the end there is always love. It is a wonderful sentiment that in the end the family is the family unit of love.

Lindsay: The show is so relatable. It is set in 1940, but it is still so significant today. It is because it is about normal human relationships and things people go through on a day to day basis during the holidays. The story is poignant to so many people on many different levels. If you are a kid coming to see the show you can relate to Ralphie in the way of really wanting a certain item for Christmas, or others may relate to the parents and understand what it is like to have children and wanting to provide for them and others may relate to the people in the town.

Kelli: For people who have only seen the movie, why should they come to the Fulton Theatre and see the stage version?

Lanene: It is an energetic and fun show, and in addition there are some surprises that you do not see in the movie. There are some surprise dance numbers that I think are a lot of fun. Also, you get to see the kids in the cast in dance numbers and interact with each other and watching that is so enjoyable. The kids in the cast work really hard and they have done a wonderful job making sure they are prepared. It is really fun to see the little antics they do with each other onstage.

Lindsay: I think there is something really special about going to see a live show especially over the holidays. We tend to be so busy and I think it is nice to treat yourself and your family to a lovely night of theatre. It is nice to just stop for a second and have the exciting chance to be drawn into the world of A Christmas Story. We, as actors in the show, are so excited to share this world with the audience. No matter if you see the production before or after Christmas it will really allow the families to reflect on their own holidays and maybe enjoy family a little more and appreciate the love that surrounds them.

Kelli: Could you tell me a little about each of your characters?

Lindsay: I play Mother and she has no name. She is only referred to as “Mother.” She is the backbone of her two boys and her husband. She juggles the typical 1940s housewife role, but she has a little more of a mind of her own than just being completely submissive. She struggles through balancing the needs of her husband and children and making sure they are provided for in the best way she knows how.

Lanene: Miss Shields, Ralphie’s teacher, is the comic relief throughout the show. I have little snippets of moments here and there in the show, I pop in and out of scenes. I have two dream sequences, “Ralphie to the Rescue” and “You’ll Shoot Your Eye Out,” and they are both a lot of fun. I’m just having a ball in the show, it is so much fun. Throughout the show Miss Shields turns into many connotations, she becomes a little wicked and a little nice during the dream sequences.

Kelli: What do you like the most about the characters that you play?

Lindsay: For me personally, I like that Mother is a real person. She is a character that people can relate to. There is something to be said about getting to play in a fantasy world, and be bigger than life, but there is something so challenging and rewarding about being a normal person with normal needs and wants. It has been exciting for me to play this character that is so real and relatable.

Lanene: I get to change things up in playing Miss Shields. Each scene I am in is different from the other, which has been fun for me, since it allows me to create new people out of Miss Shields. It is fun just to be silly onstage each night.

Kelli: What do you look forward to the most before you step out onstage each night?

Lanene: I sit by the television in the green room to watch the show when I am not onstage because I like to see what is going on onstage. My favorite moment is little Randy when he is singing his line “Find a better place.” It is the song where he and Ralphie are singing over the broken leg lamp, and it is just the sweetest thing to watch this number. Plus it is a sweet moment between the two brothers as Ralphie tries to get his little brother Randy to eat.

Lindsay: My favorite part also has to do with the children, and I love when Ralphie sings his first song, “The Red Rider BB Gun.” As I watch this young actor sing this number onstage I am overwhelmed with emotion as I see this song. These young actors remind me that there is so much joy and excitement in this profession. Ryan who plays Ralphie reminds me every night to just be a kid a little bit.

Lindsay: There is nothing like it. There is something about going to the theatre and shutting off your life for two or three hours, and that is so unique and special. To be transported into a different world, and allow yourself to do that is extraordinary. As an actor I think it is so important to nurture live theatre and nurture the Arts because it is so beneficial. The kids in this show thrive in this environment and it creates empathy and understanding.

Lanene: Live theatre really does help create empathy for not only the actors, because we have to put ourselves in someone else’s shoes, but also for the audience. It helps people understand how other people tick and why people are the way they are. It gives people a different perspective on the world.

Lindsay O’Neil and Lanene Charters can be seen on stage at the Fulton Theatre in A Christmas Story. The show is at the Fulton through December 31, 2017. For more information and tickets please visit their website at www.thefulton.org or call the box office at 717-397-7425.