Behind the Scenes: Krista Apple Talks about Walnut Street Theatre’s OTHER DESERT CITIES and the Thriving Arts Community in Philadelphia 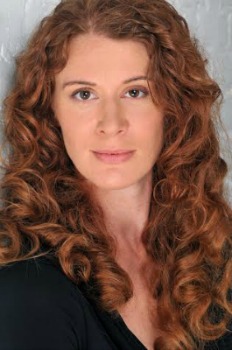 Other Desert Cities is a play that looks at family dynamics, and what happens within a family as generations and political views collide. This play centers around the Wyeth family, and their daughter, Brooke. Brooke returns home to California after a six year absence and announces to her family that she is publishing a memoir about a tragic event in their family’s history. The show balances comedy with intense family drama, and will keep audiences guessing as the drama unfolds.

Kelli Curtin: Could you tell me a little about Other Desert Cities, and what audiences can expect?

Krista Apple:  I play Brooke, who is a writer and lives in New York City. She returns to California, where she is from, to see her family. She has been away from her family for about six years. Brooke comes from a family that believes strongly in the Republican Party. Her family is not acting positively towards Brooke’s announcement that she has written a memoir about a tragic event in her family’s history and she is met with criticism.

The play is an incisive look at what is possible in a family – there is a warm dynamic and a human dynamic – relationships with a family can turn sour and then turn warm again. There is the family dynamic of parents, children and siblings within the play, and the audience connects with the sense of family. The playwright of Other Desert Cities, [Jon Robin Baitz], writes about this family dynamic by expressing the deep family relationships and the frustrations in those connections.

Kelli Curtin: Tell me about your character, Brooke Wyeth.

Krista Apple: Brooke is complicated. She is a writer who published a novel, intensive liberal and loves New York City. She is in complete contrast 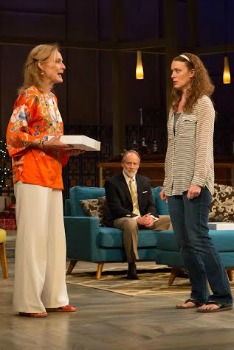 with her parents who live in California and who are old guard Republicans. Brooke lost her older brother and it is a loss she carries with her constantly; Brooke blames her parents for his death. In addition, Brooke suffers from depression, and there is a hard time deciding where decisive truth is and where Brooke’s truth is.

Kelli Curtin: Are there any aspects of your character, Brooke, that remind you of yourself?

Krista Apple: Yes. I connect to a woman who is put in a position to have to choose between art and family. Although I never had to choose, I am from Ohio and I left my family to come to the East coast to pursue being an actor. I also come from a conservative family, and there are some members of my family who do not connect to me being an artist. It is difficult because I could not be near my family and pursue my career.

Another aspect where I relate to Brooke is dealing with loss. Losing someone you love deeply is difficult and it takes years to come to terms with the grief. Grief never goes away, people just learn how to handle it. Even though this play involves themes such as grief and family relationships, this play is very funny.

Kelli Curtin: How did you prepare yourself for the role of Brooke?

Krista Apple: I studied the play A LOT. I did dramaturgical and historical research to better understand the times and events as related to the loss of her brother, this involved researching the Iraq War in 2004 (the time period of the play) and also the Vietnam War, that was occurring when Brooke and her brother were younger.

I also read a few memoirs to understand what exactly a memoir is and what it means to write one. In addition, I also have friends who are writers and asked them what would compel Brooke to publish family memoirs. My friends could not believe that she did not wait to publish these memoirs until her parents had died; they all thought Brooke must have really needed to say what was in the memoirs. Brooke has a conviction to publish her memoirs.

Kelli Curtin: Why do you think theatre is important in Philadelphia?

Krista Apple: This play particularly because it tells the story about a family. There is something about being in this room with these people and not knowing the outcome. The feeling people get by seeing a live play is something that cannot be recreated in a novel or film. Technology has found new and amazing ways to tell stories, but we will never stop needing to tell stories in real time and real space. Other Desert Cities makes this clear, as audiences will ask themselves how would I resolve this? or How would I respond to this? We all see ourselves in characters, and seeing this interaction live in a room with other people is irreplaceable.

Krista Apple: Now, it is this play with an incredible cast and theatre. Every time I walk into this theatre I see the historical marker which is a reminder that this theatre has been standing since 1809. It makes me realize that I am now part of that history. When I am on the mainstage I join countless actors that have been on that stage such as Helen Hayes, Julie Harris and William Shatner.

Another memorable experience is when I was in the studio show Proof at the Walnut Street. This show toured for four weeks and went through my hometown in Ohio. My entire family came to see me onstage and there were members of my family who had never seen a play before. It was a powerful experience to share what I do with my family.

Kelli Curtin: What gives you the most fulfillment?

Krista Apple: I have two answers to this question. My first answer is being in a room full of people I love and admire. In Philadelphia that is easy with the amount a talented artists we have in this city. Second, it is rare that I get to talk with audience members, but when I do, I love when we end up talking about the issues the play is about. It is great when members of the audience are interested in telling me what the story made them think about. I know I have done my job when a performance I am in makes the audience think beyond the scope of the performance.

Kelli Curtin: Do you have any advice for aspiring young actors?

Krista Apple: Success takes many forms. Decide now what success means to you and seek that. For some people it is fame, and for others it is regular artistic work. There are different ideas of what fame is, but people should go after their definition of success.

Other Desert Cities is currently playing at the Walnut Street Theatre in Philadelphia through March 2, 2014. For more information and tickets visit their website at www.walnutstreettheatre.org or call their box office at 215-574-3550.