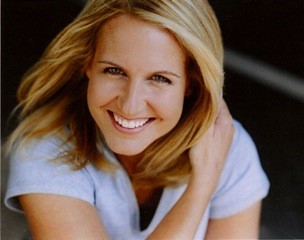 If you are a person who frequents theatres within the Philadelphia region, chances are you have seen Krissy Fraelich onstage. Recently she has been seen in shows such as Next to Normal at the Arden, Into the Woods at Theatre Horizon and The Addams Family at Media Theatre.  Fraelich has amazing energy onstage and a huge voice, which makes her ideal for taking on the role of Mama Rose in Media Theatre’s production of Gypsy this Fall. I had the opportunity to speak with Fraelich about playing Mama Rose and what the role means to her. I also spoke with her about how she approaches a role like this since it is such an iconic role and has been played by so many Broadway legends.

Kelli Curtin: Tell me a little about Rose. What is your take on her?

Krissy Fraelich: Rose is a piece of work. This is a role that every woman who is involved in musical theatre wants to play, as an actor, as a singer and as a Sondheim lover. It is an amazing role with music that is incredible – the lyrics are an early work of Sondheim where he just did the lyrics. Rose is a ball of fun, she is so iconic and I am excited to be going on this journey to play Rose. The script of Gypsy is incredibly written, and that is why it is known as one of the best musicals ever on Broadway. The text is brilliant, as well as the music and lyrics that go along with it. Even in the overture, you can feel the story and get a sense of the story when you listen to the music of the overture.

Rose is a powerhouse. She is devoted at the beginning of the story toward making June a star. Projecting all of her own stuff onto her children – June first, and once she leaves then she projects her ambitions onto her other daughter, Louise. One of the more powerful and most famous songs in the show, “Everything is Coming Up Roses,” when I listened to it as a kid and even when people perform it in cabarets, it seems like a happy song. It is not – it is a devastating and crushing song.  This woman does not care about her children’s feelings, she only cares about having her name in lights, whether it is her name or one of her daughters’, which is one in the same to her.  She is a warrior of a mother, and she will do whatever it takes, even if it is making her daughter a stripper in burlesque.

Krissy Fraelich: Not really. I am like Rose in the aspect that two of my three children are involved in musical theatre, and I want my kids to do 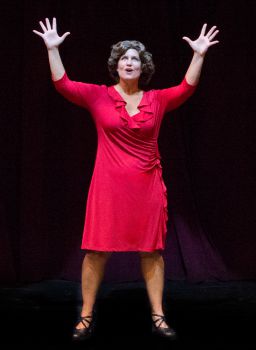 their best and succeed. I am like Rose in the way that I feel that if you are going to do something I want you to do your absolute best - do not settle. Be present, rehearse, and don’t do things half-heartedly. I am also like Rose where I want my children to succeed and be their very best.  However, I try not to push my children unless it is something that will make them happy.

Kelli Curtin: Is it important for you to like the characters you play?

Krissy Fraelich: It is important to like the characters I play. I have to like the character if I am going to care to portray her. Even in the early stages of learning about Rose, I love her energy, I love the dynamics of her, I love that her mind never stops – she is always reeling. And that is what I relate to with Rose. I never want to be boring, like Rose she always wanted to be a mover and a shaker.  I had a conversation the other day with Sherri Edelen who played Mama Rose last year at the Signature Theatre. I did Sunday in the Park with George with her at the Arden Theatre, and Sherri actually understudied Bernadette Peters in Sunday in the Park with George. She has been in this business for quite a while, and I was discussing the role of Rose with her and she said a couple things about Rose that I thought was so interesting. She said “Remember, Rose is not a monster.” And, Sherri is right, she is not.  Rose is full of energy and power. Another thing Sherri told me is that Rose was an early feminist, but did not know it. In today’s world she would be considered a feminist. She wanted to be independent and she wanted to be the one to get her kids to the top and she didn’t need a man to do anything. But she did at the time because that was the society she lived in, in society’s eyes she needed a man and that is why she got married three times.  Looking at Rose from that perspective really struck me and has provided me with a deeper look into her soul.

Kelli Curtin: You have played many emotional and intense roles over the years – Diana in Next to Normal, Dot/Marie in Sunday in the Park with George, the Witch in Into the Woods, Sarah in The Civil War – what have these roles taught you that you are applying to this role?

Krissy Fraelich: When I made the transition, for me, from playing the young ingénue into playing the mother/female roles, women who have been around a little bit, what I find in these roles is a sense of empowerment for myself. The witch in Into the Woods was so much fun, and that show had great cast. Honestly, I could not wait to play these roles, and I would not trade playing these types of roles for anything. The roles I have had the opportunity and have been blessed to play over the last five years have been amazing. I loved my experience on Broadway and making my Broadway debut was an incredible and exciting experience. I have to say doing these roles – Mama Rose, the Witch, Diana, Dot/Marie – these are the meaty roles I could not wait to sink my teeth into.

Kelli Curtin:  Rose is such an important and well known role. “Rose’s Turn” is a song that is one of the more famous numbers in musical theatre. How do you approach a song like this and make it your own? 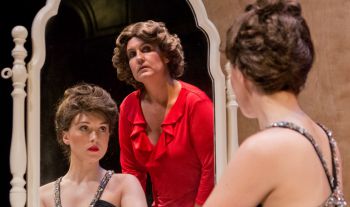 Krissy Fraelich: I dissect it. Doing a song like this makes me a little nervous because it is full of raw emotion and leaves me vulnerable onstage, and it is such an iconic number. So many greats, Ethel Merman, Tyne Daly, Patti LuPone, Angela Lansbury, Bernadette Peters, all have done this number. I have stopped listening to the recordings of this song because I really want to make it my own. In a way it is gratifying because it is such a heart wrenching number. This song is so significant because it is the first time she is letting herself go. It is the time where her children are telling her she is not needed; as a parent I completely understand this because as a mother you always want to feel needed.  “Rose’s Turn” is the ultimate 11 o’clock number as they call it in musical theatre.

This is how I approach a song like this – I dissect it and I listen to every lyric, and I write down every lyric. I look at these lyrics and ask myself first, “what does it mean?” And then, I ask myself, “what do these lyrics mean to me.” And even though I am not portraying myself, there has to be a part of me that comes out that makes it real and honest.  Finally, I say the song as if it were a monologue, which can be difficult. However, a song is like a monologue because you are telling a story. Through that I can relate to the lyrics and see the truth in it.

Kelli Curtin: How did you get started as a performer?

Krissy Fraelich: I was a ballerina first, I started dancing when I was about 3 years old and I loved dancing. I danced until the time I was about 10 years old. One day, after I saw Annie at the Forrest Theatre, and like every young girl I fell in love with it]; I was in the basement and my mom overheard me singing “Tomorrow,” and that was when I started becoming involved in musical theatre. I was studying at the time at the Pennsylvania Academy of Ballet and I loved it, but I was not passionate about it. My passion was in musical theatre. I ended up doing Annie and playing the role of Tessie at the Three Little Bakers Dinner Theatre in Delaware. A good friend of mine recommended me for the role of Annie at Upper Darby Summer Stage, and I did get to play that role there. This is where I met Terry Nolen, who is a mentor to me, and who really helped me forge the way. Terry is the one who gave me my equity card.

Kelli Curtin: Rose is such an iconic role. What other iconic roles would you like to play?

Krissy Fraelich: Before this it was Mama Rose, and I am so grateful that Jesse [Cline] has given me the opportunity to play this role. However, I would love to play Mrs. Lovett in Sweeny Todd. Also, Barbara in August: Osage County. I love musical theatre, but I would love to do a straight play.

Kelli Curtin: You have two daughters who are involved in musical theatre. What advice do you give them?

Krissy Fraelich: My oldest daughter is 16, and I always tell her to be humble and have respect. She has a great voice. I remind her to always say thank you, and that can go so far. When I advise her about acting I tell her to tell the truth, listen to the text and tell the story. There are a thousand people who can sing, but there are not a thousand people who can sing and tell a story through a song. Also, to always do her best, and never take for granted your voice or your talent. Always give your performance everything you have. My middle daughter is an actress first, and loves musical theatre and I give her similar advice.

Krissy Fraelich: You do not get the same feeling from listening to the music from a cast recording. In seeing a live show people can feel the vibration of the music and watch, live and in person, a character you have in your head come to life before you. There is nothing like sitting in a theatre and seeing a show. Live theatre brings people together, and it is a form of escapism. After 9/11, I was in a show, Babycase, and we all thought that the theatre would not be full. However, we were wrong, people came out, and the events of 9/11 did not deter people, they came to the theatre as a way to escape for a few hours from the horrific tragedies that happened in this country. It really brought the theatre community together. Audiences get a completely different feeling from live theatre than a movie, because they are immersed in it.

Krissy Fraelich can be seen in Gypsy at the Media Theatre beginning September 23, 2015, and the show runs through November 1, 2015. For more information and tickets visit their website at www.mediatheatre.org or call the box office at 610-891-0100.