Behind the Scenes: Joey Abramowicz Talks about Walnut Street’s ELF, Performing, and the Importance of the Arts 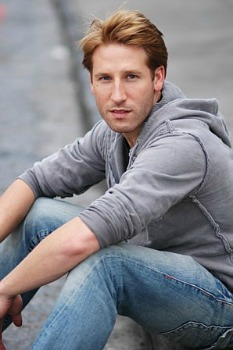 The Walnut Street Theatre’s production of Elf opens on November 13, 2013. I had a chance to speak to the show’s Dance Captain, Joey Abramowicz about performing in Elf, as well as what it means to be a Dance Captain. Joey is extremely passionate about what he does. When talking to Joey he is this ball of positive energy whose enthusiasm about performing radiates from him.  Many people will recognize Joey from being in shows at the Walnut Street Theatre in Philadelphia and the Fulton Theatre in Lancaster, Pennsylvania. Past credits include: The Music Man, Joseph and the Amazing Technicolor Dreamcoat, A Chorus Line and Miss Saigon. Joey was very candid when talking to me about his passion for performing, and why the arts are important to children as well as to the community.

Kelli Curtin: How did you get interested in performing?

Joey Abramowicz: I honestly cannot remember when I first realized I wanted to do what I do.  I think it was always in my being.  I always liked performing with my older sister when we were kids.  She is older and would make up dances and plays for us to do.  I always wanted to be in front of an audience.  Luckily, my parents fostered this passion and let me start doing it at an early age.  I did Community Theatre plays as early as 4th Grade and continued through high school.  I also was a competitive gymnast from the ages of 11-15.  That is what really led me into dancing.  I did not take classes, but the type of gymnastics I did is called Sports Acrobatics.  It consists of gymnastics and tumbling incorporated into a dance routine.  For some reason, without anyone explaining to me how to do it, I started using the acting lessons within my gymnastics dance routines.  Everyone would always say to my parents, and me “Joey is so emotional and precise with his routines.” Looking back, I am very grateful to have had the gymnastics in my life so early on.  It helped me tremendously once I started auditioning in New York.  I also received a Bachelor of Fine Arts with an emphasis in Musical Theatre from the University of Mississippi in 2001.

Kelli Curtin: Tell me about the show Elf.  What can audiences expect?

Joey Abramowicz: Elf is going to be a wonderful show for all ages!  Marc Robin’s vision for this musical theatre comedy was to not duplicate what people know from the film and [the] Broadway show, but give our production its very own unique stamp.  He has created a magical world. The dance numbers are energetic and fun, but he has not forgotten how relatable the story is.  For me, the story is about not judging someone by their exterior (Buddy in his Elf costume), but to see who they really are on the inside.  It is also about a family and how important that word is.  There are all different kinds of families!  Some families have an Elf for a son or brother! Audiences can expect to laugh, cry, and come out singing joyously as the holiday season approaches!  Bring your tissues!

Kelli Curtin: Is there a particular character or part that is your favorite in Elf?

Joey Abramowicz: Yes.  I am primarily hired to dance.  It is what I do. It is what I excel at.  Sometimes in this business, you get pigeon holed.  Directors, Producers and Casting Directors compartmentalize you as a performer.  That does not mean they think you can only do one thing, but know what you are best at.  Luckily, with Marc [Robin] and the Walnut, they have given me the chance to show some other talents.  I have a few small bit parts, but my favorite is being Matthews.  He is one of the office workers trying to find the best Christmas story to pitch to the character of Mr. Greenway.  I get to share my scenes with Ben Michael and be silly!  I also get to open my mouth and speak on stage!  It is a DREAM for a dancer!

Kelli Curtin: You are frequently credited in shows at the Fulton Theatre in Lancaster and Walnut Street Theatre in Philadelphia as 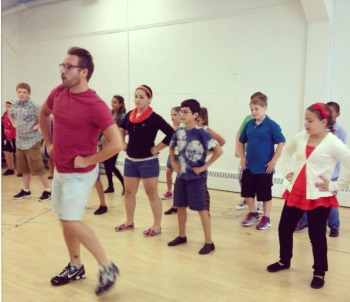 being the dance captain. Could you explain what that entails?

Joey Abramowicz: For some people the “Dance Captain” is basically the guy/girl that once the Director/Choreographer leaves the project, it’s their responsibility to make sure all of the dance numbers stay exactly the way they were when set in rehearsal.  Other duties include running understudy rehearsals and being ready to make changes to any dancing in the show if an understudy or swing goes on for a playing company member.  For me it is so much more.  I have worked with Marc Robin both here at the Walnut Street and the Fulton.  This is my 19th show with him and my 9th [show] Dance Captaining for him.  A Dance Captain needs to have the sensibility of a Director/Choreographer.  We need to be able to see the show at every angle.  Let me put it this way: I have excellent peripheral vision! The job is a lot harder than it looks!

Kelli Curtin: Why do you feel the arts are important to the community?

Joey Abramowicz: That is a great question!  I cannot tell you how important I think the arts are for the community.  For me, I know what is like when I sit down in a dark theatre for a show and the therapy it is for me.  To be able to get away from the stresses of life for two and a half hours and be taken to another place is invaluable.  I think that everyone should see live theatre on a regular basis.  It is such a fascinating thing to me.  I hope it never goes away.

Kelli Curtin: Why are the arts important to children’s development?

Joey Abramowicz: For the life of me I cannot figure out why so many programs are being eliminated for kids.  As a kid, I LIVED for anything that had to do with the arts.  I still do.  I took Art classes, singing, pottery….I know for a fact I would not be the human being I am today without the arts.  It is life changing for some kids.  It is so important that the arts programs for kids stay.  I cannot tell you how much it informed my development as an artist, but also as a human being.  You learn so much more than how to put on plays and get dressed up in costumes.  Many life lessons are learned as well.

Kelli Curtin: What gives you the most fulfillment on stage?

Joey Abramowicz: I think initially when I was younger, it was the acceptance I received for being on stage from family and friends.  I was always different and chasing something.  When I would get a show and get to perform for people I felt like a whole person.  It made me feel great to make them happy and know they were proud of me.  Nowadays I am older and hopefully getting wiser.  I have a wonderful partner and children that I love dearly.  It makes me proud to get dressed up as an Elf for our 5 and 6 year old!  As far as being onstage now, for me it is being in a position of a teacher and assistant to Marc [Robin].  As well as watching how the show is put together by so many people. Not just the faces you see onstage, but the endless hours of work and talent from everyone from the wardrobe, set and prop crews, to stage management and everyone out to front of house.  Everyone is part of the process of making the theatergoer have the best experience they possibly can.  That is what I step foot onstage for now.  To do what I do is a blessing and a gift from God.  I truly believe that.  It is my job to entertain people and make them happy.  What better gift is there than that?!

Kelli Curtin: To date what is your favorite show you have performed in? Is there a specific role in any given show that you would consider your “dream role”?

Joey Abramowicz: That is such a hard question.  I have done over 50 shows in the last 15 years.  Each one holds special meaning.  I would have to say one of the best all-around experiences onstage for me was playing Action in West Side Story.  To me that show is perfect.  In addition, to dance that choreography and match it to the role and the acting was a dream come true.  I also have a special place for the kitty cat play (Cats).  I actually just accepted a contract today for my ninth production of Cats starting in January!  I guess I really do have “Nine Lives!” As far as a future role . . . I think it would be fun to do a Rock/Pop musical like Tommy or Rent.  I have never done anything like that.  It could be fun.

Kelli Curtin: Who is the biggest influence in your career?

Joey Abramowicz: Influences come from many places for me.  I have several: some are personal friends, some are the most famous people in the world, and some are related to me.  I would have to say that Marc [Robin] is a great inspiration. He has taught me so many valuable lessons about this business.  The obvious being the dance steps and how to create a great piece of theatre.  The other lessons and inspirations are from how he chooses to conduct himself.  No one will ever tell you that their experience with the man was bad.  He makes everyone feel special. It is the truth.  No one can do any of this alone.  It takes a village to put a show up and he values each and every person and their contribution to his vision.  I can tell you that kindness and respect go a long way in this business.  Other influences are my family and my partner, Jeffrey.  Family is important and I could not do what I do without them.  My Mom and Dad are pretty high on that list too.

Elf is a musical that is based on the holiday film of the same name. Elf runs through January 5, 2014 at the Walnut Street Theatre. For more information and tickets visit their website at http://www.walnutstreettheatre.org or call their box office at 215-574-3550.

Joey is a joy! I've known him since he was a little boy. I taught him religion! I had a liturgical dance group at our church. Joey would come to watch rehearsals. Soon he was doing all the dances (and better than the girls in the group). I just knew his future would be in the arts and that his Christian faith would always give him strength to pursue his dreams. I am so proud of Joey!

Thanks for sharing this interview. I have been looking forward to "Elf" since Walnut Street announced they would be producing the show for the holidays. I cannot wait to see this show!!

Joey is an awesome dancer!! Great interview. Providing the opportunity for youth to experience live musical theater is essential for its future. I hope to see Joey return to a Marc Robin production at Maine State Music Theatre.