Behind the Scenes: Jessica Dey Talks about Prima Theatre’s Production of TICK, TICK. . . BOOM and the Importance of Live Theatre 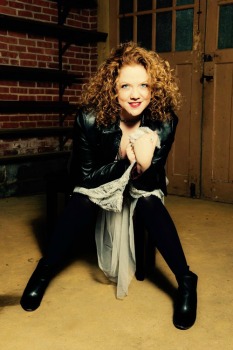 Tick, Tick . . . Boom tells the story of an aspiring composer who lives in New York City in the 1990s. The character in this show, Jon, is going through a period of self-examination in which he is trying to figure out if he made the right choice in trying to write the next great Broadway musical. This autobiographical musical by Jonathan Larson who won the Pulitzer Prize and Tony Award for Rent is about a person questioning his life choices and trying to find out what the next chapter in his life will be.

I had the opportunity to speak with Jessica Dey who plays Susan as well multiple other roles in the show. Dey is no stranger to the stages in Lancaster County. She has been seen in productions at the Fulton Theatre including Legally Blonde and Sister Act. She also is the co-owner of the Lancaster performing arts studio, Creative Pursuits. I spoke with Dey about Tick, Tick . . . Boom at PRiMA as well as what audiences can expect from the show and the importance of live theatre.

Kelli Curtin: Could you tell me about Tick, Tick . . . Boom?

Jessica Dey: Tick, Tick . . . Boom is an autobiographical musical based on the life of Jonathan Larson. It takes place in Larson’s life before he wrote the musical, Rent. In the show Jonathan is tuning thirty, and he is at a point in his life where he does not feel like he has accomplished anything and he is getting pressure from his girlfriend and friends to do something else with his life. This pressure either comes from himself, his girlfriend who wants to settle down or his friend, Michael, who has given up on his acting career to work in advertising. This show is a universal story about the struggle that comes with not achieving things you have dreamt about all your life and having nothing to show for how hard you have worked. This milestone is different for everyone, we all come to a point in our lives whether it is in our thirties, forties, fifties, and so on, when we all put pressure on ourselves. This story is how Larson navigated through this.

Kelli: Why should audiences come out and see this show? What can they expect?

Jessica: Tick, Tick . . . Boom is a ninety minute show with a three person cast. Two members of the cast play multiple roles that come in and out of the main character, Jonathan’s, life. The two actors that play several roles are creating the world around him. People will get to hear a great Larson score and some of the songs have that “Rent-esque” feel to them, in that those songs have that rock ‘n’ roll, early 90s sound. There is a line in this show that points out that on Broadway, in the 90s, there was no rock ‘n’ roll sound. There was no musical that depicted the music of the 90s that his generation listened to, and this frustrated him and inspired him to work towards creating a show like that. This show, and the music really depict what his generation listened to. In addition, one of the great things about this show is that the band is onstage with us.

Kelli: Could you tell me a little about your character, Susan?

Jessica: Susan is a dancer. She is at a point in her life where she feels that the hustle of New York City is just not cutting it for her anymore. She is thirty years old, and her career is coming to an end, so she is trying to figure out the next phase of her life. The City is really weighing on Susan, and she wants more out of life. She loves her relationship with Jonathan, but she is just really frustrated with her own life.

Kelli: What is it about Susan that appeals to you?

Jessica: I can relate to Susan in that I lived in New York City for a decade. There is a thin line between pursuing your dreams and what you are willing to put up with on a day to day basis to survive. For me, I really understand her on a multitude of levels. There is a line in the show where she says, “I think the City wears you down.” I think that happens to a lot of people, and you have to do some soul searching to figure out what you want in life. For me, the ultimate answer for me was no, I was ready to move on to the next chapter in my life and ended up in Lancaster and becoming part of the Arts community here.

I love Susan’s energy. I also admire that she has the ability to make hard decisions to do what is right for her as well as for her relationships.

Kelli: Since this show is performed in a black box theatre, could you tell me what you like about performing in a space like this?

Jessica: There is an intimacy in performing in a black box setting. This intimacy helps support these relationships. What is really cool that the audiences will witness are these moments between the characters that are not heightened realities, but day to day things. Larson is amazing at writing about relationships between people doing everyday tasks like eating in a diner or cleaning the apartment. Larson does not romanticize his relationships and have them set in places like Central Park by a fountain, he has them happen in a crappy apartment or in a diner. There are gritty and personal moments that happen in everyday spaces.  A black box setting helps magnify these moments and support this type of storytelling. For the audiences what is cool is that they are right there with the actors and get to observe this story very closely. 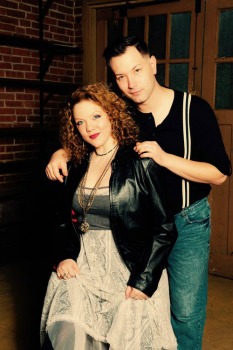 Kelli: What is your favorite song/scene in the show?

Jessica: Yes! The musical theatre nerd in me loves the song, “Sunday.” It is a song based off of Sondheim’s “Sunday” from Sunday in the Park with George. Larson really loved Stephen Sondheim and he takes this beautiful song and transforms it into his frustrations about working in a diner.

Jessica: Live theatre has the ability to take audience members into places, situations and cultures that are different from their own. By doing this, live theatre is a form of escapism and can be educational as well. Theatre forces people to hold up a mirror and examine their own life and relationships.

In addition, I also find the collaborative process exciting. Live theatre has the responsibility to tell a story, and this story is told not just by the actors onstage, but by the music, script, directing, lighting, and all other aspects that are necessary for a show to come together. The story seen in a theatre is not just one person’s story. It is a space in which many creative minds come together to tell a story that is put out into the audience and community to create a visceral experience. It is really important for theatres to tackle subjects that other mediums stay away from.

Jessica Dey can be seen in PRiMA Theatre’s production of Tick, Tick . . . Boom at the Trust Performing Arts Center March 3 -18, 2017. For more information visit their website at www.primatheatre.org or call the box office at 717-327-5124.