Behind the Scenes: Jenny Lee Stern Talks about Playing Patsy Cline in ALWAYS, PATSY CLINE at the Walnut Street Theatre 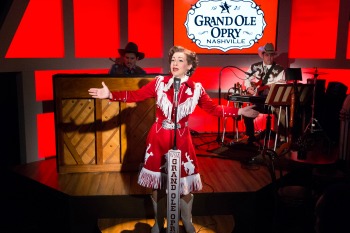 Always, Patsy Cline is currently onstage at the Walnut Street Theatre’s Independence Studio. This show tells the story of Louise Seger, and her friendship with Patsy Cline. The show is based on the touching true story of the friendship between Cline and Seger, and their story is told through music, laughter and heartfelt stories. I had the opportunity to speak with Jenny Lee Stern who plays Patsy Cline in the Walnut’s production. Stern has played this role multiple times and she brings a lot of heart to this role. I talked to Stern about what attracts her to this role, as well as her research process in playing the iconic role of Patsy Cline.

Kelli Curtin: For people not familiar with the show, Always, Patsy Cline, could you please tell me a little about the show?

Jenny Lee Stern: It is basically about a housewife/super fan named Louise who recounts her relationship with Patsy Cline. Louise starts her story as a fan and then explains how she and Patsy formed a friendship after one of her concerts. Through this story the show weaves in the Patsy Cline catalogue semi-chronologically in order to tell this story. The show begins with the Grand Ole Opry which showcases Patsy’s earlier songs and continues the story with songs that are sort of in order chronologically, at least for the first part of the show. Audiences will hear her music from songs she performed on “The Arthur Godfrey Show,” her recording “I Fall to 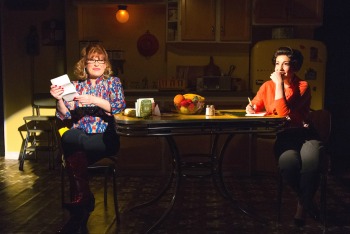 Pieces,” which was her second hit and then they will hear her first hit “Walking after Midnight.” The show puts these songs in an order that makes sense for the story, so songs are not necessarily performed in the order she recorded them, but they are in an order that makes sense to tell the story of Louise and Patsy’s friendship. Always, Patsy Cline is not a biography of Patsy Cline, but audiences will see how she ages throughout the play.

Kelli: Was it necessary for you to do research in order to play the role of Patsy Cline?

Jenny Lee: This is my fifth time playing Patsy Cline, and initially I did all the research. It has been almost three years since the last time I played this role. I went back this time around since I was working with a new director, new actress playing Louise, new costumes and new wigs, and I wanted to take this opportunity to take a fresh look at it. Also, I have had a lot of changes in my personal life, which in a way eerily mirrors some of Patsy’s life. All these change both personally and playing a role with a different group of creative artists changed how I approached playing this role.

Previously, as when you are learning any show, you try and find the recordings to listen to or find any YouTube clips you can watch – the first time around playing this role I made a playlist of all the songs of hers I would perform in the show, researched those songs online, read a couple biographies on her life and watched a few movies based on her life. However, this time around since I was already familiar with the music, I did not have to memorize anything, so I went back and listed to all the albums that the songs from the show are on, and I listed to all of Patsy’s songs that are not in the score of Always, Patsy Cline. The reason I did that was because it is easy to mimic someone if you are mimicking vowel sounds in particular lyrics. For this production, I wanted to go back and listed to songs that are not in the show, so I could really absorb the character of her voice, and her vocal stylings and quality without simply trying to memorize the vowel sounds with the words. This is something I learned from doing Forbidden Broadway. I learned that I needed to get a general sense of their tone and a sense of their style, placement and character, so while I was doing this for Forbidden Broadway it helped me to then be able to improv that character, which is a difficult thing to master. It is easier to imitate a line that someone else says, than be able to have a conversation with an audience member as that character. I wanted to take Patsy to a new level this time around where I am comfortable being my own version of Patsy Cline. I do not say a lot in the show, I don’t have many lines, so I wanted to make sure I master this character. There is part of me in this character, because there needs to be to keep the show honest. What we are trying to do up there is not a Vegas-style impersonation show, I am not a Patsy Cline impersonator. I am an actor and I do what is required for each particular character I play. So, I did a lot of research off-book in order to have a broader view of who Patsy was and what her life was like in order to make her a more layered character.

Kelli: Why should audiences come out and see this show?

Jenny Lee: This show is a super fun night, and audiences will definitely be entertained. Between the character of Louise who is a riot, she really 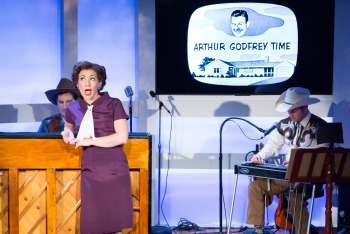 draws the audience in with her energy from the beginning, and, in addition, audiences will get hit with twenty-six amazing Patsy Cline songs. Some of these songs audiences will know, and some they will not be so familiar with. This show is just a really good story, if this was a play about a fan and a pop star and all the music was original – this would still be a really great story, the basic story is enough to keep the audience invested. The fact that it is based on two real-life people makes this show even more enjoyable, and the bonus is the audience will hear amazing Patsy Cline music. I am always shocked that people do not know her biography, so if you are one of those people you should definitely come out to learn more about Patsy and her story. Always, Patsy Cline is a cool way to re-listen and remember some of Cline’s music that you have been listening to your whole life, and maybe understand her music in a different way. This show, I think, humanizes her music. I feel Patsy’s problems are very common even in today’s world, and I think many people have gone through similar things that she has gone through. Always, Patsy Cline is ninety minutes of escapism, and I think it will spark a lot of conversations on the car ride home.

Kelli: You have played this role multiple times, what is it about this role that appeals to you? 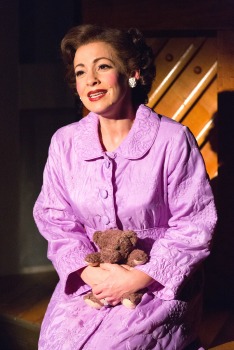 Jenny Lee: I feel a really strong connection to her story and her character as a woman and a mother. Always, Patsy Cline was my first show back after giving birth to my first daughter, I find her story inspiring and empowering.  This is pretty much what she did, we even address this in the show, Cline had a baby and three or four month later she is back on tour. For me, I had my second baby and was out on the road for a show two weeks later. I have been living on the road with my children for most of their lives. This show gave me hope because I really related to her the first time I played her in regards to her having a baby and then being on tour not long after. I feel there is an inexplicable force bringing Patsy Cline to me. Without getting too personal, there is no way I would have been able to survive the last three years of my life without this music and this woman being introduced to me beforehand. I think there is a real reason this role keeps coming back to me without me really seeking it out. I did not listen to Patsy Cline growing up, but now I feel she has brought something to my life that has helped me survive. This role does not feel like work, it is like an extension of myself.

Kelli: As an actor, what gives you the most fulfillment playing this role?

Jenny Lee: The audience’s response. And, the fact that I am doing strong work and helping anyone who has been through a similar situation and needing musical therapy in their lives. I get to sing a hymn halfway through act two, which is something rare in musical theatre. Singing that hymn gives me a lot of fulfillment because that is something that is important to me personally. I feel really proud of the work I am doing in this show.

Jenny Lee: I really seem to have this conversation a lot. Live theatre is important because every single performance is a once in a lifetime 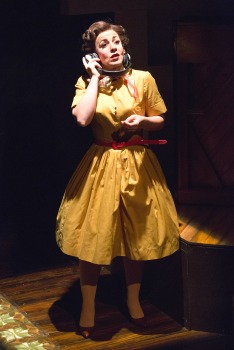 experience for the actors, the musicians, the stage managers and the audience. There is no other time that the exact same people will be in the exact same room with the exact same climate outside, had the same day leading up to the performance, and I really do not think people think about this when they walk into a theatre. They don’t realize how unique seeing a live performance is to their lives and the lives of the people involved in putting on a live production. People going into a theatre experience something they will only experience once in a lifetime. Art is not supposed to be mundane, and the life breathing in and out of human beings is going to affect the Art. There is no other medium like live theatre. There is something really special about the human connection that is only experienced through live theatre.

Jenny Lee Stern can be seen in Always, Patsy Cline at Walnut Street Theatre’s Independence Studio through July 3, 2016. For more information and tickets visit their website at www.walnutstreettheatre.org or call the box office at 215-574-3550 or 800-982-2787.