Behind the Scenes: Jeffrey Coon Talks about Playing John Wilkes Booth in ASSASSINS at the Eagle Theatre 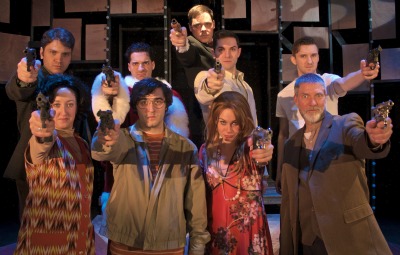 Stephen Sondheim’s Assassins opens this week at the Eagle Theatre. This musical is one of Sondheim’s lesser known pieces, and considered one of his best musicals. Sondheim has referred to this show as, “the musical that comes closest to his expectations” for his favorite musical. Assassins is not an obvious topic for a musical, it is a show that focuses on individuals who are known in history for attempting to assassinate a president, some of these attempts were successful and some were not.

I had the opportunity to speak with Jeffrey Coon who plays John Wilkes Booth in Assassins. This is not the first time Coon has approached this role, he played the same role in 2007. I spoke with him about what it is like to play Booth again, and how life experiences affect how he sees this role. I also spoke to him about the importance of this show, and why people should come see this daring and thought-provoking musical.

Kelli Curtin: For those who have never seen or heard of Assassins, what is this musical about?

Jeffrey Coon: Let me preface this answer by saying this is one of my all-time favorite shows. On the surface it is an unusual musical. This show exists in limbo where all the presidential assassins are gathered. These assassins air their grievances about who they are and why they try to assassinate.

To me, I feel that Assassins is about the unheard voices in America, and the people featured in this show went to extremes, for example for assassinating Lincoln or attempting to assassinate Ford.  I want to make clear that I do not recommend assassinating a president to have your voice heard. This show beneath the surface is about what happens to those people who feel they do not receive their inalienable rights to “life, liberty and the pursuit of happiness.” Assassins addresses this question of what happens when a person or people feel that they do not have this basic right and how this leads to things going terribly wrong when they do not feel they are being heard.

Kelli Curtin: Assassins has been called a “daring and provocative” show. Why should people come out and see this show? What should they expect?

Jeffrey Coon: People should come out and see this show for that very reason, it is daring and provocative. This show takes the story of several 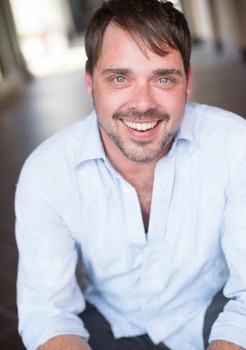 presidential assassins and makes us ask the hard question: is there any way I could actually feel sorry for a presidential assassin? This show makes people think and ponder – and ask themselves, “I know these characters acted extremely, but in some way I can relate to some of their feelings.”

What I am hoping this show does is make members of the audience come away from the show thinking about things a little differently than they did before they saw the show. As a theatre artist, it is thrilling to be part of a show that pushes boundaries and makes the audience ask themselves questions such as what does this show say about society, or what does it mean to be American.

People always have different reactions after seeing Assassins. Some will be appalled at the idea that a musical exists about presidential assassins, and others will find it thought provoking. This show is a reminder of the importance of the Arts, and this show pushes specific boundaries.  Besides Assassins being a thought-provoking show, it is one of my favorite shows with one of my favorite books. The book is by John Weidman. The book is quirky and funny. In addition, the music by Sondheim is fantastic. He imitates folk-songs, and there is one song in particular where he emulates a Carpenters song. From a musical standpoint this show fascinates me in the way it riffs on American music.

Kelli Curtin: Could you tell me about your character, John Wilkes Booth?

Jeffrey Coon: He is a bad ass. Historically speaking he was an actor from a family of actors who were famous celebrities in the 19th century. People were fascinated with the lives of the Booths both onstage and off stage.

What I have learned since researching Booth and his actions is that you have to be really committed to your convictions to do something this extreme. Booth is a really interesting person to delve into, he believed in his convictions so strongly that he was willing to kill a President. Personally, what I find fascinating about playing historical figures is that I try to learn about the figure historically speaking, but I also like to look at Booth especially from the perspective of what about him as a human can inform my interpretation for the show.

Kelli Curtin: This is not the first time you have played Booth, you played this character at the Arden in 2007. What is it like to approach this character again? Do you think you approach it differently now in 2016 than you did in 2007?

Jeffrey Coon: Playing the same role multiple times does not happen often, I think it has happened to me maybe three times. I love that I have the opportunity to play John Wilkes Booth, and it is especially thrilling because I really love this piece. As a theatre artist, it is gratifying to re-immerse myself in this role, especially since nine years later I have different life experiences that inform how I interpret this character.

Although I am playing the same role, John Wilkes Booth, I am playing this role with a different group of people. I am excited for the Eagle Theatre’s vision. The cast for this show is fantastic, the ideas they have for the production are spot on and the designs are great. I am re-energized to do this show and this part that I love, and is not an opportunity you get very often, and for me, it is exciting.

Kelli Curtin: Do you have a favorite scene in the show?

Jeffrey Coon: Yes, the book depository scene. This is such a crazy good scene. I don’t want to give away the story, but this scene is such as good scene in the way it is written to get to the point. This scene is such a weird history mind-meld in which two assassins from history, from two different time periods, are having a conversation. As strange as this scene sounds it just works for me, and it is a great scene to play. It shows what a formidable and manipulative character Booth is in this show.

Kelli Curtin: What are the challenges you face playing a character that is well known in American history? Did you do any research to prepare for playing Booth?

Jeffrey Coon: This is the reason researching when playing a historical figure is so important because people do know who the character is. I read a lot about Booth, and it helps because it assists in how I inform the audience of who this man was. However, I need to also humanize this Booth. When I play any character that has historical relevance, good or bad, I try to be truthful and honest and infuse into my interpretation who they were in real life.

What is great about Assassins is that people come into this show with preconceived notions about who these characters are. What this show does is that it asks people to put down their preconceived notions and let them be for the time they are sitting in the theatre watching the show. Audience members need to disarm themselves from the historical collective consciousness, and then ponder about the show after they leave the theatre.

Kelli Curtin: Why do you think this story of the “assassins” is important to tell today?

Jeffrey Coon:  In today’s political climate there seems to be no middle ground with little compromise. Within the production of Assassins, it does not matter where we are as a country there is always something applicable that speaks to us and our political climate. When I first did the show in 2007, that was during the Bush era, and there was a dissatisfaction from people with politics. In the prism of 2016, there is a sense about people that they are frustrated because they do not feel they have their voices heard.  There are people who are trying to find their voice in the current political climate and they are feeling that politicians do not speak for the whole.

I want to mention again, that I do not advocate for people to shoot someone. This musical however really does ask the audience to consider this idea of how does someone who does not have a political voice find one? Assassins is timeless, there will always be something within this show that resonates with audiences.

Kelli Curtin: You are well-respected and known to be an honest actor. Why do you feel honesty and being able to tell a good story is important, especially in a darker role such as Booth?

Jeffrey Coon: Part of the reason it is important to be able to be honest in telling Booth’s story. I am portraying a person in this show who really thought he was helping the South by assassinating Lincoln. Booth wanted to be heard. For me personally, helping to tell the story of those who don’t have a voice is important and interesting. A lot of people portrayed in Assassins were thought of as deeply disturbed, and they had to be in order to be able to pick up a gun and kill a president. The people that are featured in Assassins all wanted to have their voices heard in the wilderness. In telling the story of the assassins, it will make people think that there are people who need to be listened to and have their voices heard. Personally, this show makes me think, it makes me consider the idea as to whether there are people I encounter whose voices are not being heard? It makes me want to be kinder to those around me whose circumstances I may not fully understand.

Kelli Curtin: Why do you feel live theatre is important?

Jeffrey Coon: Live theatre is unique because people go into a space where they are seeing a live production, and it is a time that many different people go collectively into a space to watch an event. Even though they are watching the same production on a stage, they are all bringing their own experiences to the space. Live theatre is a communion of spirits of intellect, and it is gratifying. Every show on its own is a unique event, it is never the same twice, live theatre changes on a night to night basis – audiences react differently and there is a different vibe in the theatre that differs in each performance. Live theatre is a living and breathing unique form of art.

Jeffrey Coon can be seen in Assassins at the Eagle Theatre from January 22 through February 21, 2016. For more information and tickets visit their website at theeagletheatre.com or call the box office at 609-704-5012.

Photos courtesy of Jeffrey Coon and The Eagle Theatre