Behind the Scenes: Janet Dickinson Talks about BILLY ELLIOT at the Fulton Theatre

Currently onstage at the Fulton Theatre is Billy Elliot, a musical based on the 2000 film about a young boy who pursues his passion for ballet. It is a touching story about this boy and his family’s personal struggle. I had the opportunity to speak with Janet Dickinson who plays Mrs. Wilkinson, the ballet teacher. Mrs. Wilkinson is a strong character who encourages Billy to pursue his dream. Dickinson spoke with me about her character, why Mrs. Wilkinson and Billy’s relationship is so important and what audiences can expect when going to see the show.

Kelli Curtin:  Could you tell me a little about the show, Billy Elliot?

Janet Dickinson: Billy Elliot takes place in this small mining town in Northern England in 1984. In this time the coal mines were owned by the people. However, Margaret Thatcher felt that the unions had gained too much power, so she was stockpiling coal from other countries, so she could put her foot on the throat of the unions and squeeze the unions out because she thought they had too much power and were asking too much. Thatcher’s plan worked, she systematically shut down all these little coal mining towns. These small towns just started to get to a point where they were having a decent lifestyle as opposed to the 1940s where it was akin to slave labor. Part of this show is about these small mining communities, and this story is similar to the history of Pennsylvania or Northern Minnesota in many ways.  These were small communities that were built around coal mines.

Furthermore, in the course of this show, the miners have been on strike for almost a year and times are tough. This is a town where men are men and women are women, the boys go to boxing class, and the girls go to ballet class. This kid, Billy, by mistake happens into a ballet class. At first, as a joke, the character I play, the dance teacher, Mrs. Wilkinson, wants to see if she can get him to come into class. However, she sees a spark in this kid, she sees Billy’s talent. Eventually he begins to recognize it too, and starts coming to ballet class regularly, without his father knowing. Mrs. Wilkinson teaches dance to Billy, and this passion ignites in him. This is an emotional story because in this town nobody’s dreams come true, and eventually the family and the town rally around Billy to try to make his dream come true. The great thing about this story is that you do not know what happens to Billy, if he is successful or not, all audiences know is that this town comes together to help Billy achieve his dream.

Kelli: What can audiences expect when coming to see this show?

Janet: They will see a show about hope, and someone trying to fulfill their dreams. One of the things I love about this show is that it is a real story, it’s about genuine people, and a real community. It reminds us that everyone is flawed, nobody says the right thing, we love this kid, but the community cannot seem to get on the right page to make sure Billy gets out the door to try to pursue his dreams. Also, there is incredible dancing, incredible music by Elton John, and the staging is beautiful. This is a show that people can bring their significant other to, and everyone, musical theatre lovers or not, will find this show inspiring. The show is basically about a fish out of water who gets to jump into a bigger pond.

Kelli: Could you tell me a little about your character, Mrs. Wilkinson?

Janet: Mrs. Wilkinson is the town’s dance teacher. Her husband is probably in management, not a coal miner. I would guess they are a notch up in society from many of the members of this community. She has a daughter who is in her ballet class, and she teaches these girls ballet. She is 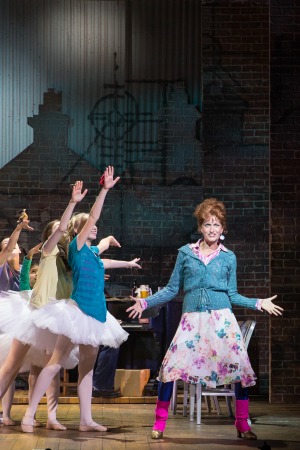 flawed, she drinks and she is in an unhappy marriage. She is not unlike people in that town, she is trying to get by and she is tough, most people in that town are not emotional, and for her it is about tough love to survive. Also, she does not want Billy to think of her as a mother – she wants Billy to keep coming back to dance class, but they also knock heads, and that is their relationship. I’m not sure everyone who plays Mrs. Wilkinson plays her as tough, but I think it is more interesting if you play her with a sort of edge.

How I play her is based on the idea that she went off to London to try to pursue a career in dance or performing. She later came back to this small town, probably got pregnant and was then stuck in this small town. She is stuck in this town and she teaches girls ballet class. Her heart is not really in it, but she can do it. When she sees the spark and talent from Billy it ignites something in her as well. Mrs. Wilkinson and Billy have this shared passion for ballet.

Kelli: In the show you transform from someone who is just trying to get through each ballet lesson to a teacher who really cares about Billy. Why is her relationship with Billy so important?

Janet: She knows his mother is dead, and she has had two encounters with the father and the brother. Both those encounters have not been good. The father and the brother are jerks, I am not saying they do not love Billy, but they are just arrogant. She sees that Billy does not have much, and if he could just somehow escape his life just may improve, because if he doesn’t there is nothing for him in this town. That makes her want to be Billy’s champion. Also, she has not done very well as a mother to her own daughter, and now her daughter is a pre-teen and she thinks things are not going to go very well for her daughter. Her and her daughter do not have the best relationship. She loves her, but she knows she has failed as a parent. With Billy, she feels he needs her, and needs her help to succeed in order to get out of this town. He touches a place in her heart that even her own child does not. Mrs. Wilkinson really wants to do right by this kid.

Kelli: How many times have you played this role?

Janet: Six times. I did this role on the tour for over a year, and I did it four times last year and now I am here playing her at the Fulton. It’s a great role, but it is tough. In act one I have big belty numbers, and a touching scene that can be hard not to cry through. The role is a complicate role, and it is also a physically demanding role. That being said, I love every moment that I have a chance to play Mrs. Wilkinson. I really love doing the number, “Shine.” She is a great role, and I am thrilled to play her.

I like that Mrs. Wilkinson is flawed, and that I get to play her as a human character. She is not perfect, but she really wants Billy to succeed, and will do whatever it takes to help him.

Janet: Mine is not your average story. I did not have a desire when I was young to be an actress. I am from a small town, and I thought I would be a realtor. I came from a musical family, and I did have a natural ability as a dancer. I perused dancing, and I could sing. I went to a school where there was a dance company. I was accepted into the dance company, dancing was my number one love, and I wanted to dance. When I reached New York City, it was a time when Fosse dancers were popular and I did not fit that mold. Fortunately for me I was cast in summer stock and I started doing plays. Through that, I began to become an actor, and did comedies, dramas and farce. People saw I had a talent for those type of shows, so I really became an actor. Doing these shows made me a stronger actor because not only could I sing and dance, but I had the opportunity to learn great acting skills.

Janet: I think having the opportunity to see live theatre is important. There are so many ways to see entertainment, such as movies and television. However, theatre is a living thing and you never know what is going to happen. In musicals, it is the culmination of dance, music, costumes singing and acting – it is every element of theatre. I think it is important to see theatre live, it is good for the community, for the kids, and it is a great social event. I hope it does not become a lost art. It is especially beneficial for kids, it helps them figure out who they are and live theatre helps them become better-rounded human beings.

Janet Dickinson can be seen in Billy Elliot at the Fulton Theatre through October 16, 2016. For more information and tickets visit their website at www.thefulton.org or call the box office at 717-397-7425.

The play was so well acted & produced.every actor was perfectly cast and Ms Dickinson was a joy to watch. She was the glue that held the play together. I'd go to see her again if given the opportunity in a heart beat!