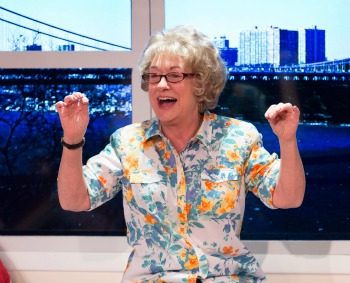 The current show playing at Walnut Street Theatre’s Independence Studio is Becoming Dr. Ruth. This play is a moving and exceptional play about Karola Siegel who is better known by the name Dr. Ruth. The show tells the story of Dr. Ruth, about her experiences in Nazi Germany, and how she made her way to the United States and eventually became an iconic television and radio personality.

I had the pleasure of speaking with Jane Ridley, who exceptionally portrays Dr. Ruth in this play. Ridley explains how she prepared for this role, why she feels telling Dr. Ruth’s story is important and why live theatre helps us to communicate.

Kelli Curtin: Could you tell me about the show, Becoming Dr. Ruth?

Jane Ridley: It is the story of Dr. Ruth’s, Karola Siegel’s life. I had no idea what her life was like before I read the play, and I believe that is true for a number of people who will come see this show. We know who she is from her public Dr. Ruth persona. In this persona she is marvelous and straightforward, and got away with talking about sex at a time when that just wasn’t done. There is plenty of that part of her life in the play, and through this people will recognize who it is they are seeing. But also her life – she was sent away in the Kindertransport at ten years old, and making her way to America and making her life as a public figure in American is absolutely fascinating. She is a marvelous storyteller, and Becoming Dr. Ruth is an evening of her stories. This is a play about the human being that became Dr. Ruth.

Jane Ridley: What interests me about any play that I start working on is to find the humanity within the character I am playing.  For me, to have a living person to study made it somewhat easier because there is so much footage on her, but also difficult because she is so well known among people of certain generations.

The way I approached this is there are two avenues of research. The first was on characterization, which uses every bit of training I have to physically and vocally characterize Dr. Ruth. Then there is the other part that is reading anything you can get your hands on about Dr. Ruth, the time in which she lived, the art, the history, the religion – learning about the Jewish traditions she comes from.  This kind of research is about the history and the world of the play. Not only is Becoming Dr. Ruth a period piece from 1997, but it goes way back to the late 1930s.  This part of the research is an enormous amount of fun because it is so interesting. The other research is technique, using the techniques I know, and then I combine the two, and do what I call channeling. All the information is there and then I just live the play.

Kelli Curtin: Why should audiences come see the show?

Jane Ridley: First it is a really interesting play, in the way it is done, because the character of Dr. Ruth directly addresses the audience. Also, Dr. Ruth’s life is astonishing and so interesting. I would like to have audience members see the show especially now with what is going on in the world with Syrian refugees turned away from places, this play has some really interesting things to say that are relevant today with current events.  The show also brings out the humanity of Dr. Ruth as a survivor, she not only survived - she has an amazing life, and has made a difference in many lives.

In addition, to spend ninety minutes in this woman’s company is a joy. She is eccentric, charming, and funny, and to watch her get tripped up by her past is really interesting. She invites the audience into her home while she is in the midst of chaos. It feels like a conversation. Becoming Dr. Ruth is a moving play, and her life is fascinating. We are so limited in what we know about her from her persona as a television and radio sex therapist, there are aspects of her life that are just fascinating. 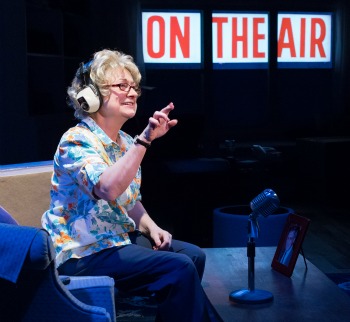 Kelli Curtin: Are there any elements of Dr. Ruth or her life that you can relate to?

Jane Ridley: The tendency to entertain, and I understand the scatteredness – the right angled turns she takes in her daily living. She thinks everything is worthy of attention.

Kelli Curtin: Why do you think it is important to tell Dr. Ruth’s story today?

Jane Ridley: This story never gets old, and we need to remember. She has a line, “we don’t know who we are if we don’t remember who we were.” That line is one good reason to come see the play. This play is about one woman’s life that happened within World War II. This play is not about WWII, it is about one particular woman, and the effect the War had on her. The play is not about Nazis, it is about an amazingly strong, courageous, funny, charming woman who survived. And, it is about how this one woman really opened up the conversation about sexual relationships between two people who loved each other, this was remarkable.

Kelli Curtin: As an actor, what gives you the most fulfillment onstage?

Jane Ridley: For me, as an actress, the act of sitting in a darkened room with an audience and being the conduit of another human being’s 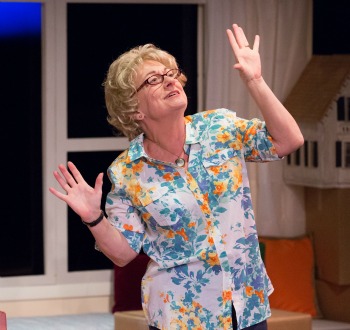 journey that will entertain, that will bring about understanding, laughter, and tears – there really is nothing like it. In the space it is the shared artistic endeavor, and I cannot do this show without the audience. Every single show is completely different particularly in the moments I address the audience directly. My words do not change, but how the play unfolds, that changes with the audience – their reaction and their imagination.

Jane Ridley: We are losing the ability to empathize, to think outside the box, to use our imaginations, to communicate in a ways that are not screen based. I really think this lack of being able to empathize is a terrible loss. So there is something about the communal act of storytelling, which we have had for centuries, and the storytelling that is not separate from the viewer, but in which the viewer participates. The viewer breathes with the actors and with the play. When the audience responds to what they are watching, for me, it becomes a communal event. It is a reminder for people that when we tell stories people can relate to that they are not alone. This is why I do it.

Jane Ridley can be seen in Becoming Dr. Ruth at the Walnut Street Theatre’s Independence Studio on 3 through December 27, 2015. For more information and tickets visit their website at www.walnutstreettheatre.org or call the box office at 215-574-3550 or 800-982-2787.