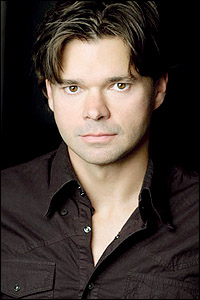 The 2015 season at Bucks County Playhouse is opening with the musical comedy National Pastime. This show is about the American dream, baseball and a show with a lot of heart. I had a chance to speak with Hunter Foster who is directing this musical and who will also direct BCP’s next production, Company. I spoke with Foster about National Pastime and what audiences can expect, as well as his returning to Bucks County Playhouse for a third year in row.

Kelli Curtin: Could you tell me about the musical you are directing at Bucks County Playhouse, National Pastime?

Kelli Curtin: Do you like directing the musicals that are “throwback” pieces? You previously directed Ain’t Misbehavin’ and Summer of ’42, which both celebrate an earlier time.

Hunter Foster: It is fun to explore period pieces because it is a world we don’t know. I try to put myself in the period when the show takes place. The period of National Pastime, the 30s, is a world where the events I know of from my life, such as 9/11, have not happened yet. When I get to direct a show that takes place in an earlier time period, that I did not live during, it is how I get to time travel. I love the 20s and 30s, it was such a fascinating time especially learning what the country experienced during those decades.

Hunter Foster: It is a true comedy that harkens to the screwball comedy of the 30s. It is a great piece of theatre that will make audiences laugh. 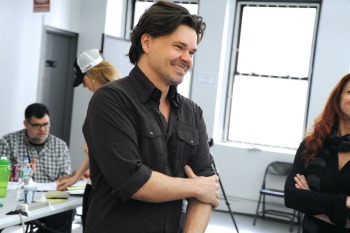 In rehearsal, we laugh a lot, so I am hoping that translates to the audience. In the theatre, we get to create a world where anything is possible, and it is a wonderful and magical world we get to reside in during this play. This particular play has magical and wonderful elements, and I am really looking forward to having people see this show.

Kelli Curtin: What about this show appeals to you?

Hunter Foster: The magic of this story appeals to me. I get to create this world and define what this world is theatrically. I get to help create this magical story and surprise the audience in the theatre with this piece. It is a stimulating show for me as a director.

Kelli Curtin: This is your third year returning to direct at Bucks County Playhouse. Why is this playhouse important? Why do you like returning there?

Hunter Foster: It is a great area that is close enough to three states, New Jersey, New York and Pennsylvania that it has a wide scope of audiences. That in itself is a great focal point for the Playhouse. Also it is in close proximity to New York so Bucks County Playhouse serves as a training ground and launching pad for new works, it also is a theatre that people want to come to see new things.

One of the great things about Bucks County Playhouse is that there is a lot of history that surrounds it. This was a playground for Moss Hart and George S. Kaufman. Additionally, Grace Kelly was an apprentice at the Playhouse, and [made her stage debut in her uncle, George Kelly’s play, The Apprentice.]

I like returning to the Playhouse because the producers are kind and trusting of me. Bucks County is a wonderful place and I love being able to walk around the town with all the shops and restaurants on the water. I am a big fan of the area and support what the Playhouse is trying to build.

Kelli Curtin: You have a successful career in the Arts in both acting and directing. How did you become interested in directing?

Hunter Foster: When I was in the third grade, I wrote and directed a play. I told my teacher that I wanted to have rehearsals and put on a play for the class, and she let me. I think the drive to organize and put on shows has just always been in me, and there is a satisfaction that comes from directing a show. Directing can be sort of scary, but if I surround myself with really great people and people that I trust then the collaboration with these shows can be almost magical.

Kelli Curtin: As a director, what gives you the most fulfillment when directing a production?

Hunter Foster: The thing that gives me the most fulfillment is when I can solve a problem or obstacle in my way. I literally try to dissect that moment and I work with the actors and choreographer to solve the problem. It is exciting that every day I get to create and form a piece of theatre and especially a show like National Pastime that I am excited for people to see.

National Pastime is at Bucks County Playhouse from April 2 – April 19, 2015. For more information and tickets visit their website at www.bcptheater.org or call the box office at (215) 862-2121.