Behind the Scenes: Hugh Kennedy Talks About MOTHERS AND SONS at Philadelphia Theatre Company 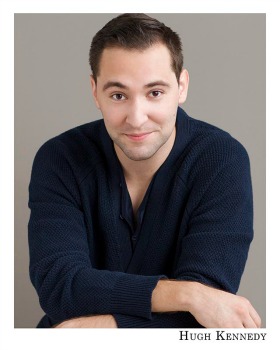 The Philadelphia Theatre Company continues its 40th anniversary season with the Terrance McNally play, Mothers and Sons. This show tells the story of a mother, Katharine, who goes to New York City to pay a surprise visit to her late son’s ex-partner, Cal, and finds he has moved on with his life is now married to another man, Will. I had the opportunity to speak with Hugh Kennedy who plays Will in Philadelphia Theatre Company’s production of Mothers and Sons. Kennedy spoke with me about his character, as well as the importance of McNally’s play.

Kelli Curtin: Could you please tell me about the play Mothers and Sons?

Hugh Kennedy: Mothers and Sons is about a reunion between Cal and the mother of his dead lover, although it is a kind of strange reunion. The mother pops into the apartment, which is located on Central Park West. It appears that the mother is there to make amends, but throughout the show you see that she is angry and lonely. I play Will, Cal’s husband, and they have a son. The pulse of this show is that it is a reminder of how society has changed, especially since the 80s.

Kelli Curtin: What can audiences expect when going to see Mothers and Sons?

Hugh Kennedy: I hope different people come away from this show with different reactions and mixed emotions. I would categorize this show as a hyper-real play. Mothers and Sons is a meaningful play to me, and it is so powerful. The lines in this play are loaded with political power. In our culture it can take 30 or 40 years to make sense of sizeable moments in history. However, with the AIDS crisis it is like this giant wound that is linked with prejudice and misinformation. This play explores the different attitude of different generations about the AIDS crisis. Also, this show is about family and the issues people face as a family.

Kelli Curtin: Could you tell me a little about your character, Will?

Hugh Kennedy: Will is a novelist who is around 33 years old. He is a novelist who has not written a novel, but he is practicing. He has, however, had stories published in The New Yorker. He spends his days writing, but he is also a wonderful and hands-on dad. Will is 15 years younger than Cal, and he is energetic and enthusiastic. Will and Cal bicker, but they also have a beautiful relationship. They have parenting down and they really have a beautiful life together.

Kelli Curtin: Can you relate to any of the characteristics of Will?

Hugh Kennedy: Yes, the one I think about the most is his compassionate way of dealing with people and issues. Will’s understanding of the AIDS crisis is cerebral. We all know people who have been touched by the AIDS crisis even if we were not on the front lines with it in the 80s and 90s. Will is much removed from it, he knows about it and is compassionate about it. However, Cal was in the thick of it, Cal has a link to the crisis because of his lover, and he speaks very articulately about the AIDS crisis.

Kelli Curtin: Why do you think Mothers and Sons is an important play?

Hugh Kennedy: First, it is a Terrance McNally play, and he is a great playwright. I have been performing McNally’s plays on and off since I was 17. McNally in Mothers and Sons takes a look at the gay community and their history, and shows how gay marriages have changed and evolved. This play is also about marriage and family. The show addresses all this and it is wrapped up in this package that is Mothers and Sons. The play is genuine, heartfelt and complicated. No one in this show is portrayed as villainous or completely angelic. It is a realistic show that captures the essence of being a family.

Kelli Curtin: I read that you work with the National YoungArts Foundation. What advice do you have for young people who want to pursue a career in the Arts?

Hugh Kennedy: I love this organization! The National YoungArts Foundation is a giant organization based in Miami, but they have programs in New York, Los Angeles and Washington DC. There is a workshop each year in January where 15 – 18 year old students who are interested in the Arts get a chance to work with accomplished artists. It is such a great opportunity and such an amazing experience for students who want to pursue a career in the Arts.

My advice for someone who wants a career in the Arts is to get involved as much as you possibly can. When I was in high school, I filled up my schedule with choir, voice, dance classes, school musicals/plays and one-act festivals. I had the opportunity to go to the Edinburgh Fringe Festival in Scotland. Young people need to chase down their passion, and the more they stick with it the rewards will unfurl themselves. My last advice is to seek out great teachers, find a Master teacher, befriend them and learn from them.

Kelli Curtin: Why is performing in live theatre important?

Hugh Kennedy: That is a great question! My reason for doing it has shifted over the years. First, it is terribly fun. I get to do great shows in front of a live audience with a cast that forms a cohesive unit. There is a synergy that is the greatest adrenaline rush between the actors on stage and the audience. I get the opportunity to be in a play in front of a live audience and that is fulfilling, and I am very privileged that I can continue to bring live theatre to audiences.

Mothers and Sons at the Philadelphia Theatre Company begins previews Friday, February 6 with Opening Night on Wednesday, February 11. The show runs through March 6, 2015. For more information and tickets call their box office at 215-985-0420 or visit www.PhiladelphiaTheatreCompany.org.