Behind the Scenes: Greg Wood Talks About SHIPWRECKED at the Walnut Street Theatre and the Importance of Storytelling 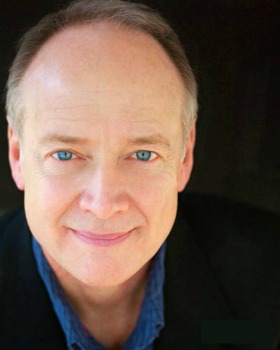 The current show at the Walnut Street Theatre’s Independence Studio on 3 is Shipwrecked: An Entertainment. This play features storytelling at its best. The play is a fast-paced adventure in which Louis de Rougemont, played by Greg Wood, is assisted by two other performers to tell a captivating tale of adventure. I had the pleasure of speaking with Greg Wood about this play, and the importance of good storytelling. We spoke about the energy that goes into a show like this as well as why he feels it is important to be a good storyteller.

Kelli Curtin: Could you tell me a little about Shipwrecked: An Entertainment?

Greg Wood: It’s an interesting piece – you think it is going to be a romp along the lines of Around the World in 80 Days or Greater Tuna where it is three people playing all these different roles, but actually there is much more to Shipwrecked. There is Louis de Rougemont’s story, which you learn toward the end of the play is a desperate attempt to regain a sense of who he is. It is interesting because the play never definitively comes to the conclusion whether Louis was lying all that time or telling the truth.

Kelli Curtin: In your opinion, why should audiences come see Shipwrecked?

Greg Wood: It does what theatre does best, it is enchanting and it demands that audiences use their imagination. I think audiences love to use their imagination especially in live theatre. It is a show that audiences will get swept away in due to its simplicity – this show is just a good story. Everyone is onstage doing everything all the time, no one is trying to fake anything, we are recreating Louis’s story the best we can. The great thing about this show is that the audience fills in the blanks, and as they do they become part of the story.

Kelli Curtin: Tell me about your character, Louis de Rougemont?

Greg Wood: He is a real person, most of the background story of him in the play is true. He did spend the last half of his life trying to prove his 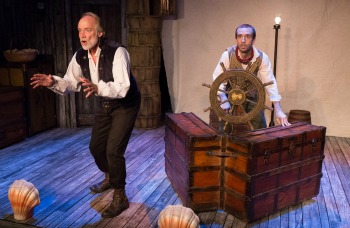 story, and he did become world famous. This play is a pretty accurate depiction of Louis.

Kelli Curtin: Do you find any elements of your character that you can personally relate to?

Greg Wood: I think his overall desire to tell his story. I especially love what he says at the end, “What does a man leave behind, but his name and his stories that he told.” I can relate to that part of Louis. And, the desire to tell a good story.

Kelli Curtin: How do you prepare for a role like this where you have to be very present and energetic, and are onstage for the entire show?

Greg Wood: You have the benefit of rehearsal. One of the things we learned is that the play didn’t really take shape until we are onstage – until we had the set and the props. This props department at the Walnut is incredible, and they had a lot of the props ready for us early on in the rehearsal process. However, it wasn’t until we got into the space that we could start finding the play. It’s interesting, I find especially since I have gotten older, you don’t really look to the end – you sort of start and find your way through, so in every performance that helps me keep the show fresh, and also helps me keep from giving away the end of the play, which as an actor, you never want to do.

I feel as a performer, it makes each show better and unique if I just start and not think about what is coming at the end. One of the hardest things we do as actors, is that we have to convince people that we do not know what is coming, that we don’t know our lines. I think it makes shows more interesting when actors are not thinking what is coming in the next moment, and just think what is happening in the moment. 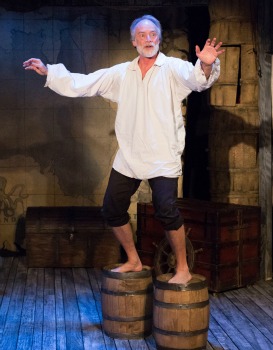 Kelli Curtin: You have a reputation for being a zealous actor. Why as an actor, is it important to be a good storyteller?

Greg Wood: Ultimately, it is our tool as actors, and it is what we remember and how we remember. I think that storytelling in regards to theatre is a more powerful device than say movies or television because it demands that the audience participate by using their imagination. Movies you can see everything, for example, in a movie you can show the audience someone landing on Mars, but in the theatre we have to describe it through story. An imagination is always more powerful than reality, and this is where theatre lives.

Kelli Curtin: How did you first gain an interest in performing?

Greg Wood: I came through it in the most unique way – I never thought I would be a performer. When I was younger I was petrified to speak in front of people. I went to college for finance and economics, and I realized I was going to have to learn to speak in front of others. I thought to myself that if I want to advance in this career I am going to have to give some presentations, so I took an acting class at Hedgerow Theatre. I went in wanting to learn how to become comfortable speaking in front of other people, and I ended up falling in love with performing. At the end of my beginning acting class, the Artistic Director at Hedgerow at the time, Delores Tanner, asked me to join the company, and so I did. To this day, I do not regret that decision. It was a lucky decision for me, and I hit the Philadelphia theatre scene just as new theatres like the Arden, the Wilma and Novel Stages were just starting out. So, I was able to make a career in Philadelphia in this great theatre community.

Kelli Curtin: What advice do you have for aspiring performers?

Greg Wood: You have to believe in yourself, and you have to believe you have something to offer. You also have to love it, and you need to be having a good time. If you are not enjoying what you are doing, quit, you really need to enjoy performing to be a success at it.

Greg Wood can be seen in Shipwrecked: An Entertainment at the Walnut Street Theatre’s Independence Studio on 3 through November 1, 2015. For more information and tickets visit their website at www.walnutstreettheatre.org or call the box office at 215-574-3550 or 800-982-2787.