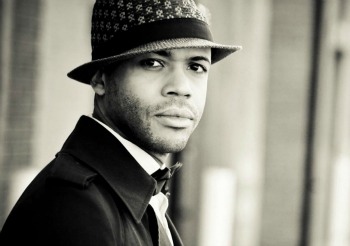 Ragtime takes place at the dawn of the twentieth century when everything is changing and anything is possible. This musical is based on the 1975 novel by E.L. Doctorow with a book by Terrance McNally, music by Stephen Flaherty and lyrics by Lynn Ahrens. The musical is a portrait of life in America at the turn of the century. This incredible musical will be at the Bristol Riverside Theatre from March 17 through April 12, 2015.

I had a chance to speak with Derrick Cobey about playing the role of Coalhouse Walker, Jr. Cobey was in Broadway’s The Scottsboro Boys, and he also recreated his role regionally at the Philadelphia Theatre Company. In the Philadelphia area, he was seen in Parade, A Little Night Music and Pacific Overtures at the Arden Theatre, and recently as Frederick Douglass in the Eagle Theatre’s The Civil War. Cobey spoke with me about playing Coalhouse Walker, Jr., some of his favorite roles and words of advice he received from Brian Stokes Mitchell, the original Coalhouse Walker, Jr. in the 1998 production of Ragtime on Broadway.

Kelli Curtin: Could you tell me about Ragtime in your own words?

Derrick Cobey: Ragtime is a show about America at the turn of the century. During this time America is going through social and political changes and Ragtime shows how people reacted to not only the changes, but also to each other. This musical takes place at a time after the Civil War and the abolishment of slavery, but there is a shift happening. During this time, it is a period where immigrants are coming to the United States and a change in the African-American culture and white American culture – Ragtime shows how these three cultures fit together and how everyone is adapting to this change.

This show also follows a plethora of historical figures – JP Morgan, Harry Houdini, Booker T. Washington, Henry Ford, and Emma Goldman. Ragtime shows a quilt of American culture. It is a musical about hope and what being an American means.

Derrick Cobey: People can expect to hear an amazing score that is really rich and written very specifically, which is smart and with heart. The storytelling in the show is smart and imaginative, which will make the audience feel, think and laugh. This show is like being on a train that never stops, the story is intelligent and full of emotion; it is a good emotional ride.

In addition, Stephen [Casey’s] choreography in this show is smart, exciting and energetic. His choreography really helps bring the characters to life. I also want to mention the costumes because they are beautiful. They are from the national Broadway tour and they are stunning. All these elements: the book, score, choreography and costumes all help bring this smart and emotional production to life to create an amazing show.

Kelli Curtin: Can you tell me about your character Coalhouse Walker, Jr.?

Derrick Cobey: Coalhouse is a young jazz musician who studied with the likes of Scott Joplin. He worked hard to learn this new style of music. He plays in clubs in Harlem. However, this man has money and has a certain status; he has a certain pride about him. He is in search of a great life and love and a hope for the future. Coalhouse represents African American men at this time and their struggles and how other people in America deal with them.

Kelli Curtin: Are there any characteristics of Coalhouse that you can relate to personally?

Derrick Cobey: Yes! First, he is very passionate about his art form. I play piano and played in church from the time I was 15 until I was a sophomore in college. Musicianship is a part of me. Also, he is a great man who strives to be stronger and to be a leader. He wants to leave a legacy for a better world. I teach, and I get to pass on values and better ways of communicating to my students.

I grew up in Alexandria, Virginia and went to a mixed High School, Mount Vernon High School. I grew up in a place where race did not matter. I had the attitude that I can do whatever I want, so in that I can relate to Coalhouse’s aspirations and goals. Coalhouse does not look at the world as black or white, he is very forward thinking for his time.

Kelli Curtin: Ragtime is a story that was first told in the 70s with the publication of the novel, and in the 1990s with the opening of the musical. Why do you think this show is still popular today?

Derrick Cobey: First, the show has an amazing score. Also, it is about the tapestry of life. All the characters weave in and out of each other’s stories. Everyone can relate to someone or something in this show no matter what their race or religion. Ragtime shows a good blend of America during this time.

The story is based on real history. The show is very human, it is powerful and moving, and it communicates how people lift each other up. When the story comes together with music and dance, it is amazing to see the energy and power of the show. In musical theatre we say, “we dance when we don’t have the words anymore.” Ragtime is a show that conveys emotion through dialogue, music and dance. These characters come to life onstage and we are given a chance to get inside the minds of these individuals and convey the emotions of these incredible characters.

Kelli Curtin: You have a successful career, and you have played many different roles, such as Andy Wright in the Scottsboro Boys and recently Frederick Douglass in The Civil War at the Eagle Theatre. Is there anyone/anything you attribute with your success?

Derrick Cobey: Yes, Victoria Bussert from Baldwin Wallace University, she is the head of the Music Theatre program and that is where I went to school. When I met her she took me under her wing and she is like a mentor/mother figure to me. She understood me right away. She told me I would go far, and she never tried to change me. She is one of my biggest supporters to this day, and she has belief in me.

Kelli Curtin: Do you have a favorite role you have played? Is there any role you would consider your dream role?

Derrick Cobey: For my favorite role, I would have to say Andy Wright in The Scottsboro Boys. Also, Jim in Big River.

My dream role is Sweeny in Sweeny Todd.

Kelli Curtin: What advice do you have for young people who want to be an actor?

Derrick Cobey: Start dancing immediately, be a good student and do your research. One of the best pieces of advice I received was from Brian Stokes Mitchell. When I was in high school or college, I emailed Mitchell and asked for his advice on how to be a successful actor. He replied to me and said, “Make sure you experience life too, so you have something to bring to the stage.”

Derrick Cobey can be seen in Bristol Riverside Theatre’s production of Ragtime. Ragtime runs from March 17 through April 12, 2015. For more information and tickets please visit their website at www.brtstage.org or call the box office at 215-785-0100.